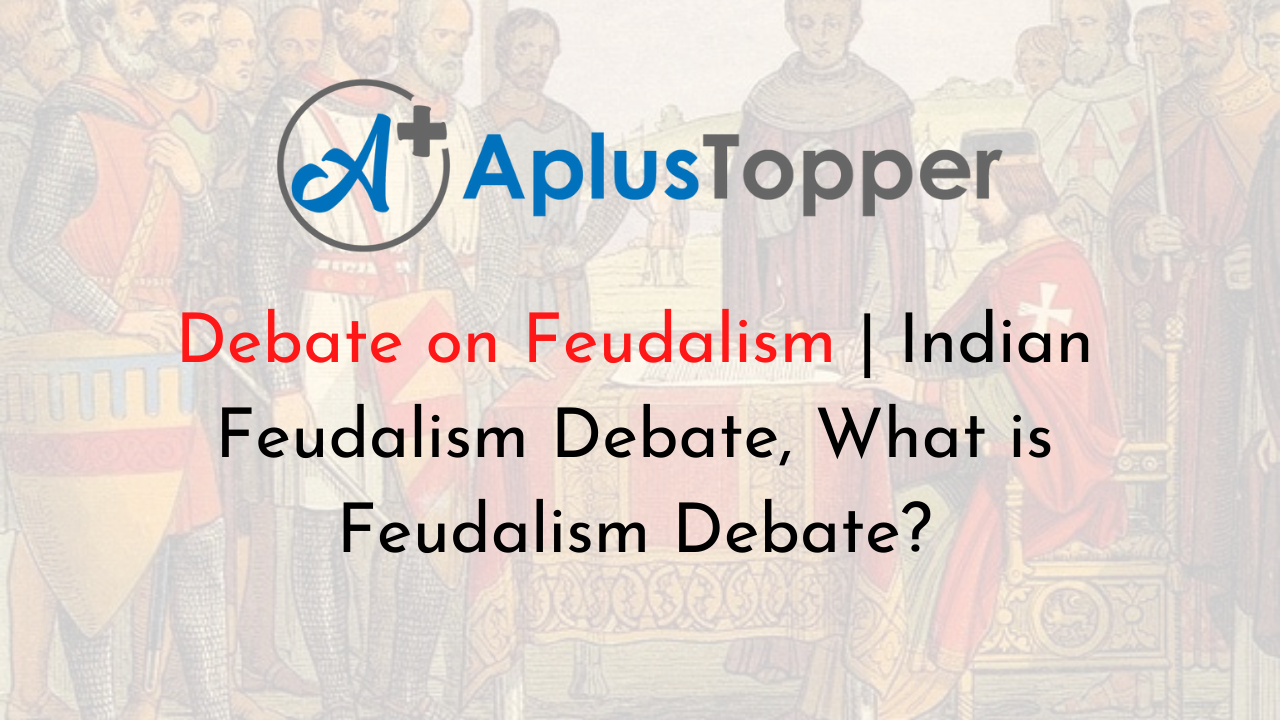 Debate on Feudalism: Feudalism is considered as a section of legal and military customs that were followed and the debate on feudalism was of great importance between the 9th and 15th centuries in the medieval European era. In simpler terms, it is the form of life that mainly depends on the exchange of land for the service of labour. They refer to what those who invented them perceived as the most significant and distinctive characteristics of the early and central Middle Ages.

The feudal system was just like an ecosystem – without one level, the entire system would fall apart.

The hierarchies were formed up of 4 main parts:

Each of the levels depended on each other on their everyday lives.

The procurement of land was considered to have high stature and it is provided by people of higher rank, and this was a major motive for everyone in the society. A single person is responsible for monitoring all these lands and assigning them accordingly to everyone, while one protects these lands. Finally, low cadre people work hard in these lands to provide food to everyone.

Feudalism is divided into 4 levels which is an intricate network system that is dependent on each level. They are:

Feudalism came to an end in 15th century as the military force changed their powers from controlling the labour to noble protection of their country and the higher level could not show authority on their lands. On the other hand, in the current generation feudalism still exists in certain parts of the world and it is termed as “Neo-Feudalism”. It is showcased as the rich getting richer and the poor getting poorer.

Increased knowledge of the Middle Ages and greater sophistication regarding the constructs (and periods) that scholars have created in attempting to comprehend the past have sparked the search for appropriate terms to describe human institutions and societies. Although the feudal labels have lost their validity as terms to designate the realities of medieval society, they provide insight into the thought processes and assumptions of the lawyers and historians who formulated and utilized them between the 16th and the 20th century.

Medieval monarchs fixed out the role at the top of the feudal system. The king/queen had total power over all the assets and determined how much land he would provide his lords and vassals. The monarchs were expected to help support the vassals below and provide protection/order for them. To fulfill this expectation, monarchs provided money to their lords in exchange for loyalty and service.

Lords, also called the Lord of the Manor, were members of the nobility, known as the highest class in medieval society. It was the lord’s job to manage and defend his land and the people who worked it. The lord appointed officials to make sure villagers and peasants carried out their duties, such as farming his land and paying rent in the form of crops and other foods. Some lords held posts in the king’s government and assisted the king in acting as the advisory. In return for the land the lords got from their king, they were given certain responsibilities and roles in order for the feudal system to work out:

Lords had an important job of leasing out the land they had received from their monarch, also called fiefs, to their vassals. These fiefs were like promises between vassal and lord which linked them together – if a vassal did not keep to his promises – then the vassal’s land was taken away.

Knights were usually vassals of more powerful lords. A vassal was the second-in-command to their feudal lord. They had to live their life following a stringent code of behaviour called chivalry.

This idea of chivalry showed what actions the knights were expected to follow, especially to the benefit of the lord. Some of these promises included being loyal to the Church and lord, be just and right, and protecting the helpless. Chivalry also included showing helpful and kind acts to women.

The relationship between lord and vassal was very important in the Middle Ages. As mentioned above, vassals were granted land from their lords to look over and control. If the vassals and knights failed to follow the duties and/or did not stick to their chivalry, they were automatically stripped of their position and their land.

Since most people in the Middle Ages were peasants, peasants formed the majority of the feudal system. Though they didn’t have a relationship like vassals and lords, they were necessary in the entire feudal structure by helping work out the land. Their labor freed lords and knights to spend their time preparing of war or fighting. They also were not allowed to marry without the permission of their lords. There were two kinds of peasants: free and unfree. Free peasants rented land to farm and owed only their rent to the lord. Unfree peasants, also called serfs, farmed the lords’ fields and weren’t allowed to leave the lords’ manor. However, in return for their labor, they received their own small land to farm and a place to live.

Along with the labor the peasants had to perform, peasants and serfs also could owe the lord countless taxes. There was a yearly payment called “head money” with a certain amount per person. The lord could require a tax, called a tallage, whenever he needed money. FAQ’s on Debate on Feudalism

Question 1.
What is the main idea of feudalism?

Answer:
The dominant social system in medieval Europe, in which the nobility held lands from the Crown in exchange for military service, and vassals were in turn tenants of the nobles, while the peasants were obliged to live on their lord’s land and give him homage, labor, and a share of the produce, notionally in exchange for military protection.

Question 2.
What is the debate on Indian feudalism?

Answer:
There is debate among historians whether the feudatory system in India qualifies as true feudalism, as apparently there was a lack of an economic contract between king, vassal and serf. Other historians however argue that the similarities are significant enough to describe it as feudalism.

Question 3.
How did feudalism decline in India?

Answer:
The jobs of feudal lords were largely dictated by the political, economic and military setup. Primarily, feudal lords were allotted the role of managing the military. This exploitative nature of feudalism gradually led to its decline.