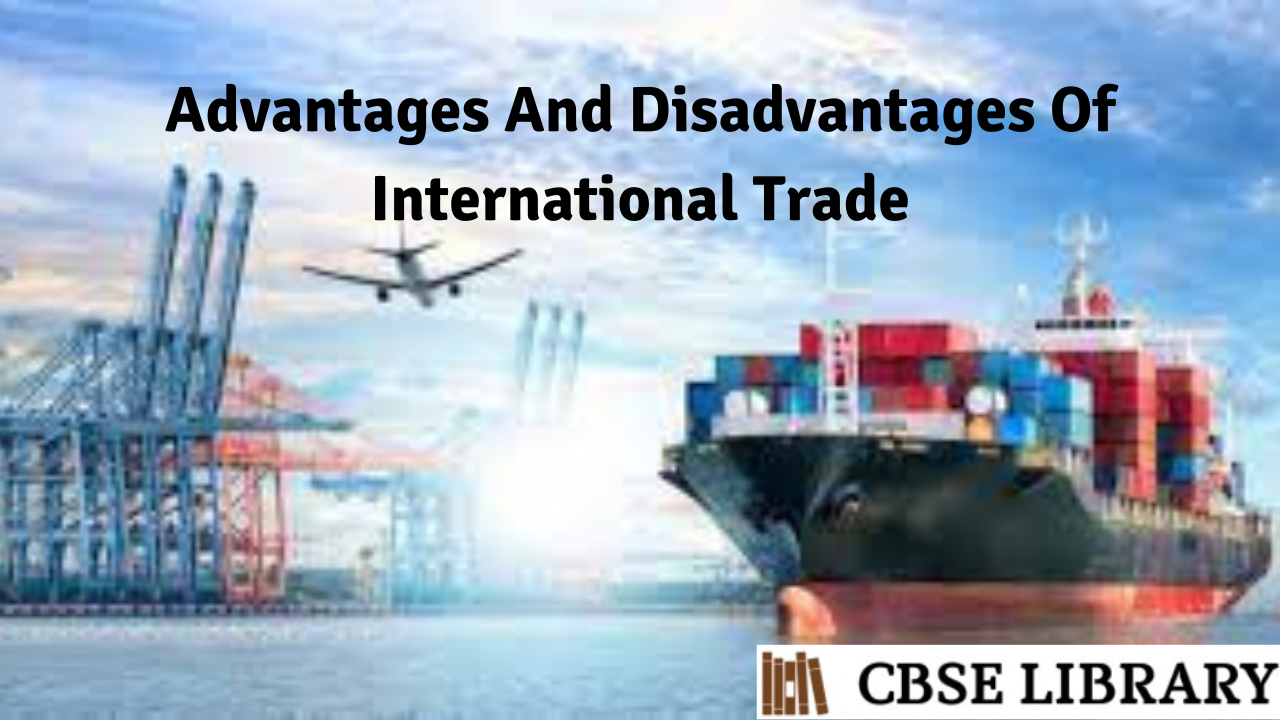 Advantages And Disadvantages Of International Trade: International Trade or Foreign Trade refers to the trade with foreign countries. It means buying and selling goods from one country to another country. It involves the exchange of goods and services between the citizens of two or more countries. For example, India’s trade with the USA, UK, and Japan is foreign trade.

International trade is used by countries when they don’t have enough resources or capacity to meet domestic demand. Therefore, by importing the needed goods, they can use their domestic resources and produce those things they are good at, and then they can export the surplus.

The major reasons why a nation imports goods and services are:

Unlike national trade, international trade involves capital, products, and services that are exchanged across borders or territories because there is a need or demand for those goods or services.

Global trade is an economic activity between countries. Commonly traded items include consumer goods such as mobile phones and clothing, capital goods such as machinery, and raw materials and food. Transactions also include services such as travel services and payment for foreign patents.

A significant role is played by private banking systems and central banks of the trading nations in international financial payments that facilitate international trade.

There are three types of International Trade:-

Export Trade: When the goods produced in one country are purchased by residents of another country, this is called export trade. It can also be applied to the provision of services within one country and for the benefit of someone living in another country. For example, India exports engineering goods to other countries.

Import Trade: Import Trade is where goods or services are brought into one country from another, where they were originally manufactured or created. For example, buying of oil by India from Kuwait.

A product is usually imported when the country where it originates does not need the product and the manufacturing costs are significantly lower than those in the country receiving it. A good can also be imported if it cannot be manufactured in the desired country

Entrepot Trade: Entrepot Trade, also known as transshipment, occurs when goods are imported into a country and re-exported out of the country without being distributed within the country on importation.

Optimum use of resources:- International trade permits countries to make optimal use of their natural resources; each can concentrate on producing goods to which its resources are well suited, and it can exchange its surplus for other goods it is ill-equipped to produce, thus, reducing resource waste.

Competition:- The sale of goods and services in foreign markets also increases competition in those markets. In a way, it is good for local suppliers and consumers as well, since suppliers must ensure that their prices are competitive and quality is good enough to compete with foreign goods.

Transfer of technology:- The transfer of technology from one nation to another often occurs through international trade. Developing nations often lay conditions for foreign companies that facilitate the development of local manufacturing capabilities.

Generation of employment:- The foreign trade sector creates employment opportunities by assisting agricultural and industrial expansion and growth. As well, a large number of intermediaries employed in export and import trade enjoy direct employment as a result of foreign trade.

Restricted growth of home industries:- Trade with foreign countries may discourage the development of domestic industries, Unrestricted imports and foreign competition may threaten the survival of upcoming and infant industries in the country, And the dumping policy of developed nations may harm underdeveloped nations.

Invasion of culture:- The influence of foreign trade tends to invade a country’s culture. One consequence is that young people in poor countries get accustomed to foreign lifestyles and consumption patterns.

Economic dependence:- If an economy is overly dependent on imports for crucial industries, then exporters may force the nation to make decisions that might not be in its best interests.

Comparison Table for Advantages And Disadvantages Of International Trade

FAQs on Advantages And Disadvantages Of International Trade

Question 1.
What is International Trade?

Answer:
International Trade means buying and selling goods and services outside the boundaries of the country.

Question 2.
What are imports and exports?

Question 3.
How many types of International Trade are there?

Answer:
There are three types of International Trade:-