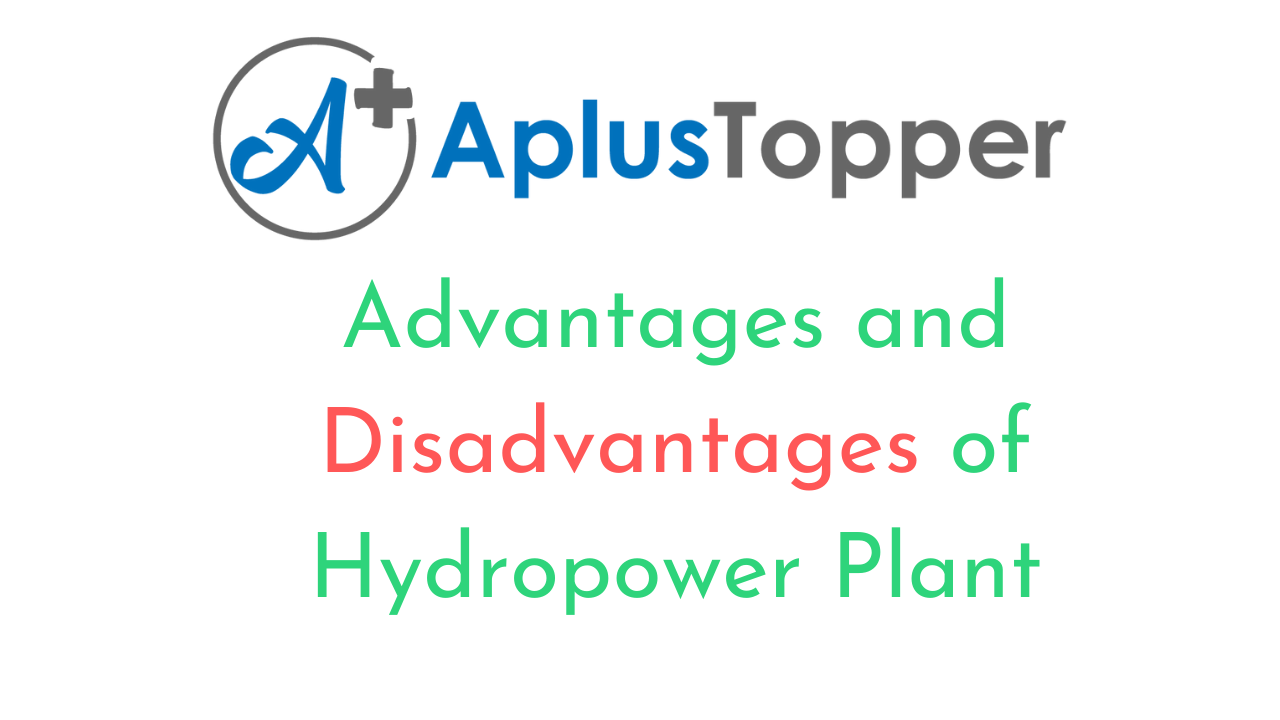 The most convenient and easily accessible power plant which also creates the least pollution is the Hydropower plant. Hydro refers to water, so in hydropower plants, electricity is produced through the flow of running water. Let us now know more about hydropower plants.

HydroPower plants are plants that use impounded water of rivers on which dams are constructed, to produce electricity. The dam, which is constructed, has a turbine underneath the tumbling water. This causes the turbine to move and the potential energy of the turbine in combination with the kinetic energy of fast-flowing water converted into mechanical energy to produce electricity.

Hydropower plants also known as Hydropower electricity plants are mostly set up in regions having plenty of water. These power plants, after the production of electricity, supply the power to many local regions, factories, markets, etc. Now after learning the meaning of hydropower plants let us look upon some of their advantages and disadvantages.

Here are a few advantages of hydropower plants :

Water is available throughout the year: Water is a natural resource that is available all year round. The quality and quantity of it may get reduced due to seasonal change or other man-made reasons but it can get replenished with time. Anyone setting hydropower plants will make sure that water must be easily accessible in the areas where plants have been set up.

Operational and maintenance cost is lower than other power plants: The Hydropower plants which are set up require huge infrastructure to build embankments and thus capital or finance required is also huge only at initial stages but less as compared to other plants. For example, a thermal power plant requires not only infrastructure but also operational and maintenance expense is high as there are daily requirements of raw material I.e. Coal to run the plants and machines has to be repaired regularly. Thus we can conclude here that hydropower plants have a lower cost expense as compared to other electricity-producing plants.

Hydro Plants are made for multiple purposes: Hydropower plants serve not only the purpose of production of electricity but are also used for other purposes like irrigation, controlling flood, recreational, etc. We can therefore say that hydropower plants also help in developing the economy of a nation indirectly also.

The requirement of working staff is less: Staff required to monitor the working of the plant is less. This also leads to reducing the cost of operation of hydropower plants and making it economical for a country. 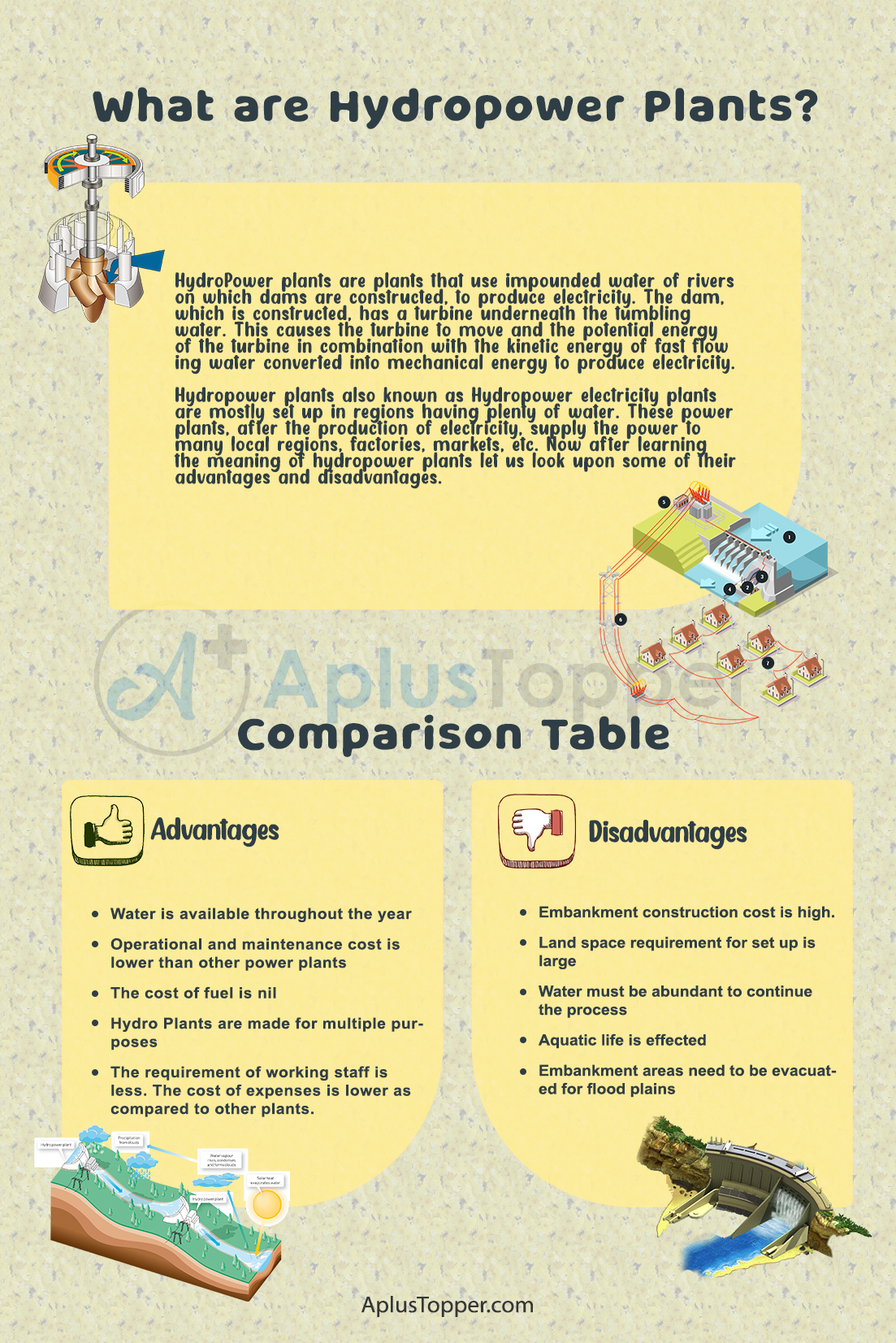 Listed are a few Disadvantages of Hydropower Plants.

Embankment construction cost is high: The cost of construction of infrastructure I.e. The embankment is high at the initial stages. Hydropower requires huge capital as an investment at the starting point while other electricity-producing plants require to make plants and set up machines that are lower as compared to it.

Land space requirement for set up is large: Since an embankment or dam is made upon the river, therefore, the land required for setting up the huge infrastructure is large.

Water must be abundant to continue the process: Requirements of water in hydropower plants is must but some time due to certain drought conditions or some natural causes, quantity gets decreased and with less amount of water, generation of electricity gets interrupted.

Aquatic life is affected: Embankment reduces the possibility for fish to reach their breeding ground which in turn affects other animals as they rely upon fish for food. As the flow of water ceases, the nearby habitat of rivers gets reduced also they are not able to access water.

Embankment area needs to be evacuated for flood plains: A hydropower plant wherever made the nearby locality and area are affected at large as people residing there have to evacuate to fulfil the needs of plants. Sometimes due to heavy rainfall or typhoons, the embankment although strong would affect a large number of people residing in an area nearby, same happened in the case of Banqiao Dam where people have to suffer flood as the dam collapsed due to strong wind and heavy rainfall and approximately 171000 Localities have to lose their life.

Comparison Table for Advantages and Disadvantages of Hydropower Plant

Let us now look at the advantages and disadvantages together. FAQ’s on Pros and Cons of Hydropower plant

Question 1.
What are Hydropower plants?

Question 2.
What are Embankments?

Question 3.
What are the advantages of hydropower plant?

Answer:
The advantages of hydropower plants are:

Question 4.
What are the Disadvantages of Hydropower Plant?

Answer:
The Disadvantages of Hydropower Plant are: