I. Answer the following questions in 30-40 words each :

Question 3.
What was the extent of Akbar’s empire ?
Answer:
Akbar’s empire extended from Bengal in the east to Afghanistan in the west and from the Himalayas in the north to the Godavari river in the south. His vast empire was divided into fifteen provinces.
They were :

Question 4.
Name the main defects in Jahangir’s character.
Answer:
Jahangir had many weaknesses in his character like being addicted to drinking, pleasure and comfort loving, being easily influenced by others. He was so much under the control of his wife Nurjahan that she practically ruled the kingdom herself. His wrong habits affected his health and he died in 1627 A.D.

Question 5.
Why did Aurangzeb fail ?
Answer:
There were many reasons responsible for the failure of Auranzeb. Aurangzeb’s policy of extension of his empire till South resulted in his disaster. His continuous Deccan compaigns for 25 years shattered his health, exhausted the treasury and demoralised the army. His continuous neglect of Northern India led to lawlessness.In a way Deccan ulcer ruined him completely. Moreover, his unwise religious policy provoked the Jats, sikhs and the Rajputs who became his bitter enemies. This also contributed to his ultimate downfall.

II. Answer the following questions in 80-100 words each :
Question 1.
What were the main drawbacks in Humayun’s character ?
Answer:
No doubt Humayun had to face a considerable number of difficulties when he ascended the throne but there were many drawbacks in his own character which were responsible for his failure.

His addiction to opium, his easy going and pleasure seeking temperament were other drawbacks of his character.
Humayun was neither a military genius like his father, nor was he a good administrator. He also lacked political insight and was easily be fooled by his clever opponents.

Humayun added to his difficulties because of these drawbacks. That is why Lanepoole, remarks, “Humayun’s worst enemy was he himself.”

Question 2.
How can you say that Babur was not the real founder of the Mughal empire in India ?
Answer:
It is not correct to say that Babur was the real founder of Mughal empire in India because though Babur was a successful general and a brave warrior, he was not a successful and competent administrator and an empire builder. He did not lay the foundation of any particular administration. He did nothing to reform the revenue system. He did not make any efforts of improving the condition of the peasants. He did not introduce any judicial reforms.Moreover, Babur did not show farsightedness even in economic matters. He distributed the treasury liberally without realising its consequences. As such he was only ‘a soldier of fortune’ and not an ‘architect of empire’.

Question 4.
Estimate Akbar as a nation-builder.
Answer:
Akbar was the first Muslim ruler who turned his attention towards the growth of National spirit by uniting diverse castes, religions and kingdoms into a common unity. Akbar was a nationalist and he promoted national outlook both in politics and culture. Throughout his empire, he set up the same administrative system and enforced the uniform judicial and revenue systems. He did wonderful work to establish cultural unity by blending Hindu and Muslim traditions and styles in the field of art, architecture, painting and music. He also promoted Hindi and Sanskrit literature.
To bring social unity, he encouraged inter-marriages and tried to end the age old differences between Hindus and Muslims. He brought economic unity by improving the conditions of the peasants and introducing reforms in land revenue system. He encouraged the rise of the idea of uniformity by giving religious freedom. His ‘Din-i-Lahi’ was a combination of virtues of all religions prevalent in the country.
Thus Akbar earned the litle of a ‘National king’ who helped the country to march on the road to progress.

IV. Match the contents of Column A with Column B : 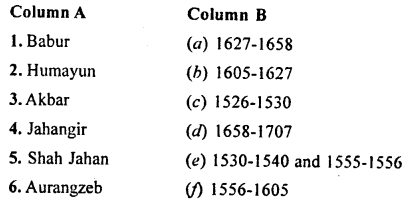 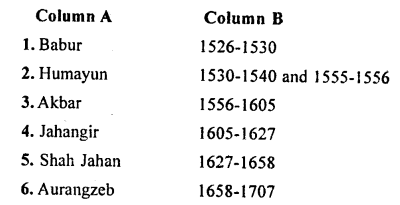 Question 1.
Name a few buildings built by Shah Jahan. How did he spend his last days ?
Answer:
Shah Jahan spent lavishly on his magnificent buildings like Taj Mahal, Red Fort, Jama Masjid the Peack throne etc. Shah Jahan had a peaceful reign but in his last days he suffered a lot due to the war of succession among his sons in 1657-58. He was imprisoned in the Agra Fort in his last days.

Question 2.
What was ‘Din-i-Ilahi’ ?
Answer:
Akbar founded a common religion, ‘Din-i-llahi’ in which he combined most of the virtues of all the religions prevalent in the country, so that his subjects lived in a peaceful and friendly atmosphere.

B. Answer the following questions.

Question 2.
Give a brief account of Babur’s early life.
Answer:
Babur lost his father, when he was eleven years old and at that tender age he became the ruler of a small principality in Central Asia called Farghana which he inherited from his father. He was also able to fulfill his dream of conquering Samarkand, when he was just 14 years old. But within a short time he lost both Farghana and Samarkand and became homeless but due to his courage and determination, after some time he became the ruler of Kabul.

Question 5.
What information do we get from Babur’s memoirs about:
(1) Babur
(2) Babur’s countrymen
(3) Hindustan
Answer:

Question 6.
With reference to the following points discuss the achievements of Babur :

Answer:
Founder of the Mughal empire — Babur was a brilliant general and leader of men. With limited resources and a small army, he defeated large armies with his superior techniques and skill. He destroyed the power of the Lodis and the Rajput rulers and laid the foundation of the Mughal empire.
Poet and scholar — Babur was a great poet and writer. He was a great scholar and lover of literature. His artistic sensibilities and abilities as a learned are clearly seen in his autobiography.
Lover of nature — Babur was a great lover of nature, hills and valleys. He loved gardens and laid out many beautiful gardens iii the provinces that he conquered. He was buried in a garden in Kabul as according to his will.

Question 9.
When and how did Humayun lose his empire ? When did he return and recapture his lost kingdom ?
Answer:
Humayun lost his empire after a defeat in the Battle of Kanauj in AD 1540. He was so badly defeated in this war that he went into Exile. With the military help from the Shah of Persia in AD 1554. Humayun was able to capture his kingdom.

Question 10.
Humayun lost his empire because of inherent flaws in his character. Explain.
Answer:
Humayun was a pleasure loving ruler and he lacked political wisdom, military foresight and was not able to take quick and wise decisions. He could not understand the jealousy of his brothers and was not able to take a firm decision on them. He was a capable soldier but a poor general. These all characteristics led to the downfall of Mughal empire.


Hope given A New Combined History & Civics for Class 7 ICSE Solutions Chapter 6 are helpful to complete your  homework.