B. Match the following :

D. State whether the following are true or false :

2. Jahangir is said to have installed a chain of justice.
Ans. True.

3. The Peacock Throne was taken to Persia by Nadir Shah.
Ans. True.

E. Answer the following questions in one or two words/ sentences :

Question 2.
Name Jahangir’s son who rebelled against him.
Answer:
The rebellion of his eldest son, Khusrau.

Question 3.
Why is Shah Jahan known as the Engineer King?
Answer:
Shah Jahan is known as Engineer King due to his work in the field of architecture. During his time magnificent buildings were constructed which are remembered still now. Some of the finest examples of monuments during his reign are — the magnificent Taj Mahal at Agra, the Moti Masjid at Agra Fort and the dignified Jama Masjid at Delhi.

Question 4.
Which fort did Shah Jahan build in the new city of Shahjahanabad?
Answer:
Red Fort.

Question 6.
State any one major cause of the decline of the Mughal empire.
Answer:
He spent too much money on militaiy expeditions and building magnificent monuments which drained the royal treasury.

Question 8.
What were the objectives of Aurangzeb’s Deccan policy?
Answer:
Aurangzeb wanted to crush the growing powers of the Maratha’s. As these people were very strong and courageous and they also did not accept the overlordship of the ruler. This empire was also very vast and prosperous, so Aurangzeb wanted to have it under his control.

Question 9.
Why did the annexation of Bijapur and Golconda prove harmful for the Mughal empire?
Answer:
It became too vast and unwieldy and brought the Mughals into direct contact with the Marathas.

Question 1.
Jahangir fulfilled Akbar’s unrealized imperial dreams by conquering Mewar. Explain.
Answer:
Jahangir sent an expedition against RanaAmar Singh of Mewar who, like his father, Rana Pratap Singh, had refused to acknowledge the overlordship of the Mughal emperor. The Rana of Mewar was defeated. He pledged his loyalty to Jahangir, who treated him with courtesy. He allowed the Rana to retain his territory and appointed his son, Kama, as a military commander in the imperial army. The submission of Mewar established the paramountcy of Mughal authority in Rajputana and marked the fall of the last bastion of Rajput resistance.

Question 2.
To what extent were Jahangir’s Deccan campaigns successful?
Answer:
Jahangir sent an expedition under Prince Khurram who managed to recapture the fort of Ahmadnagar. Prince Khurram was honoured with the title of Shah Jalian (Lord of the World). The war continued and by the end of Jahangir’s reign, Ahmadnagar reasserted its independence and remained outside Mughal control.

Question 3.
What qualities did Nur Jahan possess to make her worthy of her name?
Answer:
Nur Jahan means-light of the world and according to her name she possessed all the qualities like she was intelligent, beautiful, educated and cultured. She was a good poet and designer too. She designed new varieties of fabrics and jewellery. She was also strong and courageous and helped Jahangir to take decisions in matters related to the government.

Question 4.
Nur Jahan was very ambitious and eventually became the power behind the throne. Explain.
Answer:
Nur Jahan was ambitious and soon became the power behind the throne. Jahangir consulted her on all matters concerning the affairs of the government. Nur Jahan soon became the virtual ruler of the Mughal empire. Graudally, Jahangir left the administration in her hands and spent his time indulging in his addiction to wine and opium. Coins began to be issued jointly in the name of Jahangir and Nur Jahan.
Nur Jahan used her positioin and influence to appoint her father, brother and other relatives to important posts in the administration. Her niece, Mumtaz Mahal, was married to Jahangir’s third son, Khurram (Shah Jahan).

Question 5.
Shah Jahan’s reign was an age of splendour and cultural brilliance. In this context, discuss:

(a) Taj Mahal : It took more than 20 years to complete the Taj Mahal, at a cost of one crore rupees at that time. It is made of pure white marble and is lavishly decorated with semi-precious stones and lace-like screens. It is an octagonal monument with a splendid dome and four slender minerals, set in a beautiful garden,
(b) Red Fort : This building is made of red sandstone. There are many splendid buildings inside the Red Fort. The Diwan-i-Khas is the most impressive. Its ceiling is made of silver. Its walls are made of marble and decorated with gold and semi-precious stones.

Question 6.
Why did Aurangzeb’s Deccan campaign against the Marathas prove to be a ruinous misadventure? What were the long-term consequences of this campaign?
Answer:
The Deccan campaign proved to be a ruinous misadventure that showed lack of political wisdom.
Suspicious by nature, he did not trust his sons and nobles. His officials were like puppets on strings. Aurangzeb’s supervision of every department often bordered on interference.
His policy of discrimination between his subjects on grounds of faith also made him unpopular. He was a man of unshakeable convictions and tried very hard to reach his goals by doing what he thought was right. As he lay on his deathbed, he wrote several letters to his son. In one letter he wrote, ‘I know not who I am or why I came into the world … I have not done well for the country or its people … I know what punishment will be in store for me to suffer.’ During the first half of the 19th century CE, the great Mughal empire decayed and disintegrated. The Mughal emperors lost their power and glory and their vast empire finally shrank to a few square miles around Delhi.

Question 7.
Why did Aurangzeb fail as a ruler?
Answer:
Aurangzeb possessed qualities of an ideal man but he was failure as a ruler. Like his father he was not able to follow the policy of religious tolerance and friendship. His list of enemies not only included Rajput’s but also Sikhs and the Marathas. He was also very suspicious by nature, which was not liked by his officials. His policy of discrimination with his subjects also made him an unpopular ruler.

Question 8.
Briefly explain the negative aspects of Shah Jahan’s reign that eventually led to the decline of the Mughal empire.
Answer:
Hie policy of religious tolerance and friendship with the Rajputs was continued by Shah Jahan.
Behind the glamour and the glitter of Shah Jahan’s reign, however, lurked some disturbing shadows.

G Picture study :
This is a picture of a 17th century-CE. monument, built in red sandstone by a Mughal emperor. 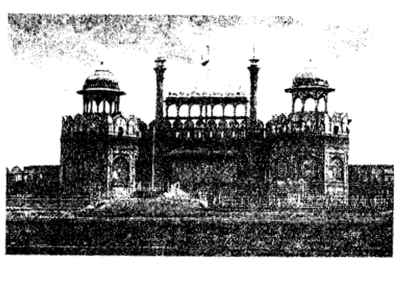 Question 2.
Where is it located?
Answer:
Old Delhi.

Question 5.
Mention its important features.
Answer:
Important features are as :
The Diwan-i-Khas is the most impressive. Its ceiling is made of silver and its walls are made of marble decorated with gold and semi-precious stones.
Diwan-i-Aam was Shah Jahan’s Peacock Throne. It had a canopy supported by twelve emerald pillars, each bearing two peacocks studded with gems. This golden throne, which took 7 years to complete, was taken to Persia by Nadir Shah in 1739 CE.

Question 2.
How did Aurangzeb come to power?
Answer:
Aurangzeb with the help of his brother Murad defeated Dara and executed him. Then he imprisoned his father in the Agra Fort and occupied the throne.

Question 4.
Give reason to show Jahangir was a great lover of justice?
Answer:
Jahangir was a great ruler who was always concerned about the welfare of his people and did his best to provide them justice. For this he had installed a ‘chain of justice’ made of pure gold with sixty bells attached to it, between his palace and the bank of the Yamuna. Anybody could ring that bell and ask for justice and Jahangir would personally listen to the complaints and gave solution for it.