Question 1.
State the sources of water

Answer:
(a) Sources of water on the earth’s surface are —

(b) Sources of Water below the earth’s surface are —

Question 2.
Give the importance of water in

Answer:
The importance of the Water is as follows :

(a) Life processes — Water is used by all plants, animals & humans for carrying out various metabolic processes including photosynthesis by plants & excretion by animals & humans.
(b) Household purposes — Water finds numerous applications, such as watering plants, washing clothes, cooking, bathing, cleaning etc.
(c) Fire fighting — Water is used for extinguishing fires either directly or as a constituent in a fire extinguisher.
(d) Transportation — Water serves as a habitat for marine life i.e. preferred place for an organism to live.

Question 3.
Explain how water plays an important role in

(a) industry
(b) agriculture.

Answer:
(a) Uses of Water in Industry :

(b) Uses of Water in Agriculture :

Question 5.
Draw a labelled diagram to show the change of state of water from solid state to liquid state to gaseous state starting from ice.
Answer: 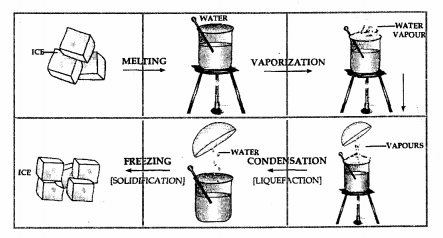 Back To The Earth’S Surface – As Rain Water

(a) solute
(b) solvent
(c) solution with reference to addition of sodium chloride to water.

Question 9.
Draw a neat labelled diagram of addition of copper sulphate to water. Label the solute, solvent and solution in the same.
Answer:

Question 10.
From the following substances given below state which will form a solution in the same.

A saturated solution cannot dissolve more of the solute at a given temperature.

Question 13.
State whether the following statements are true or false. If false write the correct statement.

(b) Thermal pollution — Certain industries such as the iron & steel industry & numerous chemical plants use large amounts of water for varied functions.

(a) Harmful wastes such as oils & chemicals should not enter into the water.
(b) Proper toilets & sewage systems should be used to prevent human excreta, containing disease causing organisms to enter into the water.
(c) Washing of clothes & bathing should be avoided near water sources.
(d) Planting of trees near water sources including river banks also minimizes pollution.
(e) To minimize thermal pollution the water should be cooled before being discharged as a waste.
(f) Man should be made aware through various awareness programmes & media about the harmful effects of water pollution & ways to control it.

Question 16.
State what is meant by the term ‘conservation of water’. State a few water saving methods, which may be used in the home to conserve water.
Answer:
Conservation of water is the means of preventing wastage of water so that clean water can be obtained by preventing pollution of water and by protecting the sources of water.
Need for conservation — Inspite of large quantities of water on the earth’s surface only a small percentage is potable water fit for human consumption and household purposes.
The need for water is ever increasing and hence all sources of water need to be conserved.
The various methods to conserve the water are :


(a) such as closing running taps and using smaller cisterns in toilets.
(b) checking all leakages in household pipes.
(c) turning off the water tap while brushing teeth and while washing hands.
(d) using less electricity, since power plants also consume substantial amount of water.

(a) Because only a small percentage is potable water fit for human consumption and household purposes.
(b) Polluted water acts as a carrier for germs which causes various diseases.
(c) Drip irrigation in agriculture utilizes supply of water in small quantities.

Q.1. Complete the statements by filling in the blanks with the correct word/s.

Q.2. State whether the following statements are true or false. If false, write the correct statement. 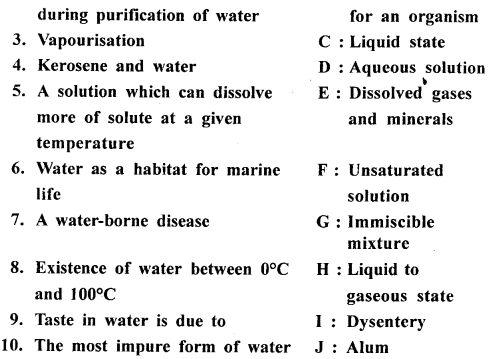 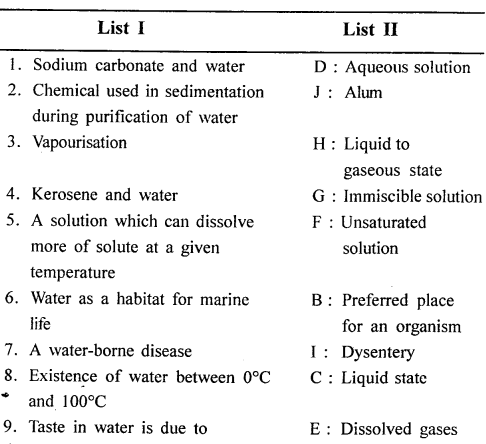 Question 1.
A chemical used during chlorination of water.
Answer:
Chlorine.

Question 4.
The natural process by which circulation of water takes place from earth’s surface to atmosphere and back to earth’s surface.
Answer:
Water cycle.

Question 5.
The liquid or medium of dissolution which allows the solute to dissolve in it.
Answer:
Water (solvent).