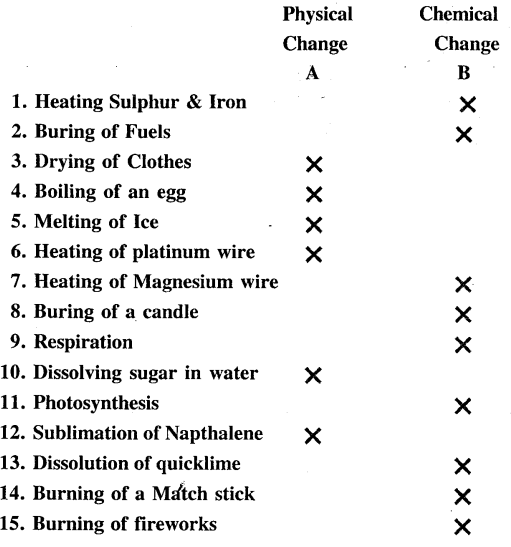 Question 1.
Change is the law of nature and occur in our everyday life, at all times and in all places.
Differentiate between the following changes with a suitable example.
(a) Desirable and undesirable change.
(b) Periodic and non-periodic change
(c) Slow and fast change.
(d) Natural and man-made change
(e) Reversible and irreversible change.
Answer:
(a) Desirable and undesirable change 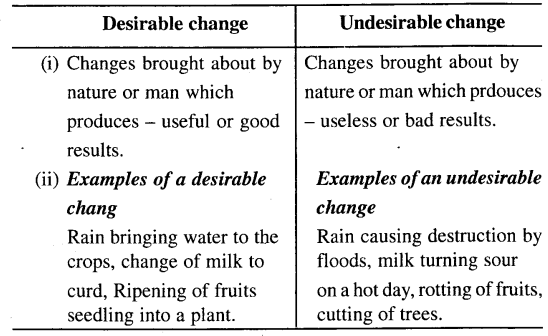 (b) Periodic and non-periodic change 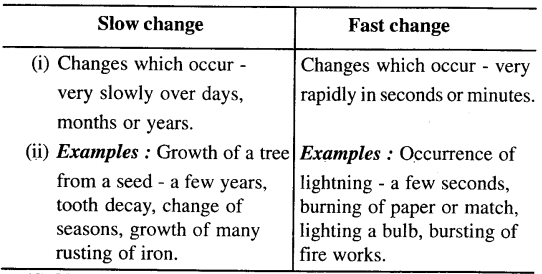 Question 2.
Differentiate between a physical change and a chemical change with reference to –
(a) Nature of change e. temporary and reversible or permanent and irreversible.
(b) Formation of products.
(c) Energy change taking place during the respective change.
Answer:

Question 3.
Give three reasons why melting of wax, is considered a physical change while burning of a candle, a chemical change.
Answer:
Melting of wax is a temporary and reversible change on cooling, wax solidifies and no new product is formed while burning of candle is a permanent change i.e. products are not convertible, new substance is formed having different composition & different properties.

Question 4.
State the observations seen, when milk in a dish is kept aside for a few hours or more. Is the change which occurs – a physical change or a chemical change. Give reasons.
Answer:
On keeping aside – the milk in a dish for a few hours or more. The change observed – will be that the milk has changed into curd. The change is permanent and cannot be reversed. New substance curd is formed. It is a chemical change.

Question 6.
Ice kept in a beaker, slowly melts and turns into water. The water in the beaker on solidification Le. freezing turns back to ice. Give four reasons why the change from ice to water and water back to ice is considered a physical change.
Answer:
Both change are physical changes since

Question 7.
Explain the term – ‘sublimation’. Is sublimation of naphthalene – a physical or a chemical change. Give reasons.
Answer:
It is the conversion of a solid – directly into gaseous [vapour] state and on cooling directly back to solid state – without changing into liquid state.
It involves a change of state-and hence it is a physical change.

Question 10.
Photosynthesis is a natural process by which green plants manufacture food in the presence of sunlight.
(a) Are any new products formed during the above process.
(b) Can the change be reversed or is irreversible.
(c) State the conclusions which can be drawn, to represent photosynthesis as a physical or a chemical change.
Answer:
(a) The change is permanent and new products are formed – i.e. glucose and oxygen.
(b) The change cannot be reversed. It is irreversible.
(c) Carbon dioxide and water cannot be obtained back from glucose and oxygen hence it is chemical change.

1. Fill in the blanks with the appropriate words for each of the statements given below:

2. State whether the following statements are true or false. If false write – the correct statement.

3. Match the examples of changes in List I with the correct.

4. Fill in the blanks with the correct words for each of the statements given below: