Question 3.
State what is observed when hydrochloric acid is added to silver nitrate solution.
Answer:
A white ppt. of silver chloride is formed.

Question 2.
Of the two gases, NH3 and HCl, which is more dense.
Name the method of collection of this gas.
Answer:
Hydrogen chloride gas ; by upward displacement of air.

Question 3.
Give one example of a reaction between the above two gases which produces a solid.
Answer:
NH3 (g) + HCl (g) → NH4 Cl (s-solid)

Question 4.
Write equations for the reaction of dil. HCl with each of the following :

Question 2.
Write the equations for the following reactions :

Question 1.
Name the gas evolved (formula is not acceptable). The gas produced by the action of concentrated sulphuric acid on sodium chloride.
Answer:
Hydrogen chloride (HCl)

Question 2.
Match each substance A to E listed below with the appropriate description given below :
(A) Sulphur
(B) Silver chloride
(C) Hydrogen chloride
(D) Copper (II) sulphate
(E) Graphite.
(i) A Covalent compound which behaves like an ionic compound in aqueous solution.
(ii) A compound which is insoluble in cold water but soluble in excess of ammonia solution.
Answer:

Question 3.
Write a fully balanced equation for each of the following :

Question 2.
State your observation when :
A glass rod dipped in NH4OH soln. is brought near an open bottle containing cone. HCl
Answer:
Dense white fumes of – ammonium chloride are formed.

Question 4.
How would you distinguish between dilute HCl and dilute HNO3, by addition of only one solution.
Answer:
HCl (dilute)

Question 3.
In the laboratory preparation of hydrochloric acid, Hydrogen chloride gas is dissolved in water.
(i) Draw a diagram to show the arrangement used for the absorption of HCl in water.
(ii) State why such an arrangement is necessary? Give two reasons for the same.
(iii) Write balanced chemical equations for the laboratory preparation of HCl gas when the reactants are :

Answer:
(i) Refer to page 335 of this book.
(ii) Two reasons for the use of funnel arrangement are :

(A) Prevents back suction of water into the flask.
(B) Provides a large surface area for the absorption of the gas (HCl).

Question 1.
Identify the gas evolved when :

Question 2.
State one appropriate observation for

Question 4.
Study the figure given below and answer the questions that follow : 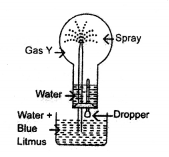 Question 2.
Identify the acid which on mixing with silver nitrate solution produces a white precipitate which is soluble in excess ammonium hydroxide.
Answer:
Dilute hydrochloric acid

Question 3.
The following questions are pertaining to the laboratory preparation of hydrogen chloride gas:

Question 4.
State your observations when dilute hydrochloric acid is added to :

When dilute hydrochloric acid is added to lead nitrate white precipitates of lead chloride is formed.

When dilute hydrochloric acid is added to copper carbonate brisk effervescence due to the liberation of carbon dioxide is observed.

When dilute hydrochloric acid is added to sodium thiosulphate pale yellow residue (due to formation of sulphur) is formed and a gas with choking odour is formed.

Question 5.
Identify the gas evolved and give the chemical test in when dilute hydrochloric acid reacts with :

Question 2.
Identify the substance underlined – A solid formed by the reaction of two gases, one of which is acidic and the other basic in nature.
Answer:
Ammonium chloride.

Question 3.
State one relevant observation – Action of dilute hydrochloric acid on iron [II] sulphide.
Answer:
A foul smelling gas like rotten eggs is given off.

Question 4.
Certain blanks spaces are left in the following tables as A & 8. Identify each of them.

Answer:
A : The products are sodium hydrogen sulphate (NaHSO4) and HCl gas.
B : HCl gas as collected by the upward displacement of air.

Q. Complete the statements given below pertaining to hydrogen chloride gas or hydrochloric acid.

Question 2.
Give the equation for preparation of HCI gas by Synthesis. State two conditions involved in the synthesis.
Answer:

Question 3.
Give a balanced equation for preparation of HCl gas in the laboratory from sodium chloride.
Answer:

Question 4.
In the laboratory preparation of HCl frem sodium chloride, state why the following are preferred –

Question 5.
State with reasons the method of collection of HCl gas in the laboratory.
Answer:
HCl gas is collected by upward displacement of air because it is 1.28 times heavier than air. It is not collected in water because it is highly soluble in water. 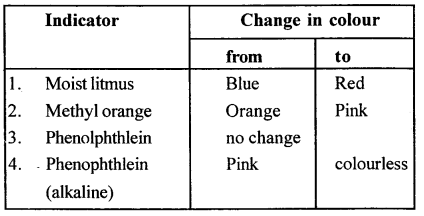 Question 10.
Give a balanced equation for the thermal dissociation of

Question 11.
Give the equation and state the observation seen when HCl gas reacts with ammonia.
Answer:
When a gas jar containing hydrogen chloride gas is inverted over ajar full of ammonia gas, dense white fumes are formed.

1. Direct absorption of HCl gas in water using a delivery tube i.e., arrangement (i) causes back suction.
Hydrogen chloride gas is extremely soluble in water. If a delivery tube through which HCl gas is passed is directly immersed in water, the rate of absorption of HCl gas is high and hence a partial vacuum is created in the tube. The pressure outside being higher causes the water to be pushed up into the delivery tube and damages the apparatus. This is called back-suction.
2. Special funnel arrangement, i.e., arrangement (ii) is used for avoiding back suction.
The funnel arrangement :

(a) Prevents or minimizes back-suction of water.
(b) Provides a large surface area for absorption of HCl gas.

The rim of the funnel is placed so that it just touches the trough containing water. If back-suction occurs, the water rises up the funnel and the level outside the funnel falls, thus creating an air gap between the rim of the funnel and the surface of water. The pressure outside and inside equalize and the water which had risen in the funnel falls down again. This process continues till the water in the trough is saturated with hydrogen chloride gas resulting information of hydrochloric acid.
Hence hydrochloric acid is not prepared in the laboratory by passing hydrogen chloride gas directly through water, but prepared using a special funnel arrangement.

Question 20.
Give balanced equations to obtain

Question 22.
State how you would prove that HCl contains

Question 23.
State the composition of aqua regia. State which component is the oxidising agent in aqua regia.
Answer:

Question 25.
State why aqua regia dissolves gold, which is insoluble in all other acids.
Answer:
In aqua regia (a mixture of 1 part cone. HNO3 and 3 parts cone. HCl by volume), nitric acid oxidises hydrochloric acid to give nascent chlorine. This nascent chlorine is very reactive. It reacts with gold to give gold (III) chloride, which is soluble in water.

Q.1. Give balanced equations for the conversions A, B, C, D and E given below :

Q.2. Give reasons for the following :

Question 3.
In the fountain experiment to demonstrated the high solubility of HCl gas in water, dry HCl gas is filled in the round bottom flask.
Answer:
HCl gas present in the flask dissolves in water due to high solubility, creating a partial vacuum in the flask. The outside pressure being higher pushes the water up the jet tube which emerges as fountain.

Q.3. Complete the statements given below using the correct word/s

Q.5. Select the correct word or formula from the same given in bracket :