What are the Non Conventional Energy Resources?

Why do we need to use more renewable energy?

The Importance of Renewable Energy:

How do solar panels convert the sun’s energy into electricity?

Solar Energy:
The Sun has been radiating an enormous amount of energy. Small part of solar energy reaches the outer layer of the earth’s atmosphere is absorbed while passing through the atmosphere and the rest reaches the earth’s surface.
(i) Solar cooker:
A black surface absorbs more heat as compared to a white or a reflecting surface under identical conditions. Solar cookers and solar water heaters use this property in their working. Some solar cookers achieve a higher temperature by using mirrors to focus the rays of the Sun. Solar cookers are covered with a glass plate. 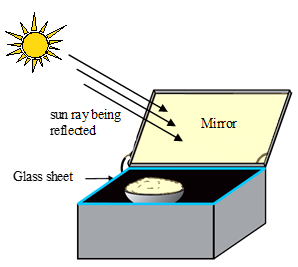 (ii) Solar cell:
Solar cells convert solar energy into electricity. A typical cell develops a voltage of 0.5–1 V and can produce about 0.7 W of electricity when exposed to the Sun. A large number of solar cells are, combined in an arrangement called solar cell panel that can deliver enough electricity for practical use.
The principal advantages associated with solar cells are that they have no moving parts, require little maintenance and work quite satisfactorily without the use of any focussing device.
Another advantage is that they can be set up in remote and inaccessible hamlets or very sparsely inhabited areas in which laying of a power transmission line may be expensive and not commercially viable.
Silicon, which is used for making solar cells, is abundant in nature but availability of the special grade silicon for making solar cells is limited. The entire process of manufacture is still very expensive, silver used for interconnection of the cells in the panel further adds to the cost.
In spite of the high cost and low efficiency, solar cells are used for many scientific and technological applications. Artificial satellites and space probes like Mars orbiters use solar cells as the main source of energy.

(B) Energy From Sea

(i) What is the tidal energy?
Due to the gravitational pull of mainly the moon on the spinning earth, the level of water in the sea rises and falls.This phenomenon is called high and low tides and the difference in sea-levels gives us tidal energy. Tidal energy is harnessed by constructing a dam across a narrow opening to the sea.
A turbine fixed at the opening of the dam converts tidal energy to electricity.
(ii) What is the wave energy?
the kinetic energy possessed by huge waves near the seashore can be trapped in a similar manner to generate electricity.
The waves are generated by strong winds blowing across the sea. Wave energy would be a viable
proposition only where waves are very strong. A wide variety of devices have been developed to trap wave energy for rotation of turbine and production of electricity.
(iii) What is ocean thermal energy?
The water at the surface of the sea or ocean is heated by the Sun while the water in deeper sections is relatively cold. This difference in temperature is exploited to obtain energy in ocean-thermal-energy conversion plants. These plants can operate if the temperature difference between the water at the surface and water at depths up to 2 km is 293 K (20°C) or more. The warm surface-water is used to boil a volatile liquid like ammonia. The vapours of the liquid are then used to run the turbine of generator. The cold water from the depth of the ocean is pumped up and condense vapour again to liquid.
The energy potential from the sea (tidal energy, wave energy and ocean thermal energy) is quite large, but efficient commercial exploitation is difficult.

(C) What is the geothermal energy?

Due to geological changes, molten rocks formed in the deeper hot regions of earth’s crust are pushed upward and trapped in certain regions called ‘hot spots’. When underground water comes in contact with the hot spot, steam is generated. Sometimes hot water from that region finds outlets at the surface. Such outlets are known as hot springs.
The steam trapped in rocks is routed through a pipe to a turbine and used to generate electricity. The cost of production would not be much, but there are very few commercially viable sites where such energy can be exploited. There are number of power plants based on geothermal energy operational in New Zealand and United States of America.

(D)  How the electricity is generated from water? 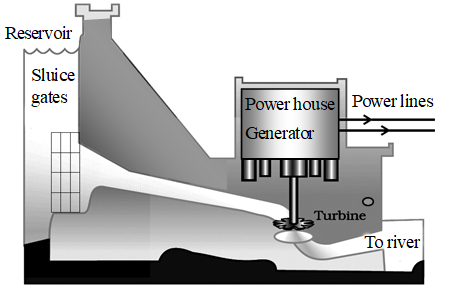 In order to produce hydel electricity, high-rise dams are constructed on the river to obstruct the flow of water and thereby collect water in larger reservoirs. The water level rises and in this process the kinetic energy of flowing water gets transformed into potential energy. The water from the high level in the dam is carried through pipes, to the turbine, at the bottom of the dam .
Since the water in the reservoir would be refilled each time it rains (hydro power is a renewable source of energy) we would not have to worry about hydro electricity sources getting used up the way fossil fuels would get finished one day.
Limitation: constructions of big dams have certain problems associated with it. The dams can be constructed only in a limited number of places, preferably in hilly terrains. Large areas of agricultural land and human habitation are to be sacrificed as they get submerged.
Large eco-systems are destroyed when submerged under the water in dams.
The vegetation which is submerged rots under anaerobic conditions and gives rise to large amounts of methane which is also a green-house gas. It creates the problem of satisfactory rehabilitation of displaced people. Opposition to the construction of Tehri Dam on the river Ganga and Sardar Sarovar project on the river Narmada are due to such problems.

Biomass power plant:
Plant and animal products are said to be bio-mass. These fuels, however, do not produce much heat on burning and a lot of smoke is given out when they are burnt. Therefore, technological inputs to improve the efficiency of these fuels are necessary.
When wood is burnt in a limited supply of oxygen, water and volatile materials present in it get removed and charcoal is left behind as the residue. Charcoal burns without flames, is comparatively smokeless and has a higher heat generation efficiency.
Similarly, cow-dung, various plant materials like the residue after harvesting the crops, vegetable waste and sewage are decomposed in the absence of oxygen to give bio-gas. Since the starting material is mainly cow-dung, it is popularly known as ‘gobar-gas’ 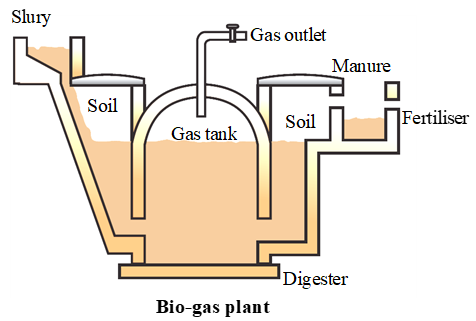 Structure:
The plant has a dome-like structure built with bricks. A slurry of cow-dung and water is made in the mixing tank from where it is fed into the digester.
The digester is a sealed chamber in which there is no oxygen. Anaerobic micro-organisms that do not require oxygen decompose or break down complex compounds of the cow-dung slurry.
It takes a few days for the decomposition process to be complete and generate gases like methane, carbon dioxide, hydrogen and hydrogen sulphide.
The bio-gas is stored in the gas tank above the digester from which they are drawn through pipes for use. Bio-gas is an excellent fuel as it contains up to 75% methane. It burns without smoke, leaves no residue like ash in wood, charcoal and coal burning. Its heating capacity is high. Bio-gas is also used for lighting. The slurry left behind is removed periodically and used as excellent manure, rich in nitrogen and phosphorous.

(F) How do we generate energy from wind?

Wind energy:
Heating of the landmass and water bodies by solar radiation generates air movement and causes winds to blow. This kinetic energy of the wind can be used to do work. This energy was harnessed by windmills in the past to do mechanical work.
For example, in a water-lifting pump, the rotatory motion of windmill is utilised to lift water from a well. Today, wind energy is also used to generate electricity.
To generate electricity, the rotatory motion of the windmill is used to turn the turbine of the electric generator. The output of a single windmill is quite small and cannot be used for commercial purposes. Therefore, a number of windmills are erected over a large area, which is known as wind energy farm. 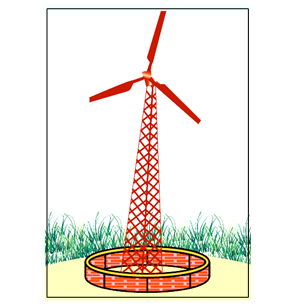 Advantage:
Wind energy is an environment-friendly and efficient source of renewable energy. It requires no recurring expenses for the production of electricity.
limitations: Wind energy farms can be established only at those places where wind blows for the greater part of a year. The wind speed should also be higher than 15 km/h to maintain the required speed of the turbine. Furthermore, there should be some back-up facilities (like storage cells) to take care of the energy needs during a period when there is no wind.
Establishment of wind energy farms requires large area of land. For a 1 MW generator, the farm needs about 2 hectares of land. The initial cost of establishment of the farm is quite high. Moreover, since the tower and blades are exposed to the vagaries of nature like rain, Sun, storm and cyclone, they need a high level of maintenance.