Question 1.
Differentiate between the terms elements, compounds and mixtures with suitable examples.
Answer:
Element — is a pure substance
e.g. Potassium

Question 3.
Elements are mainly classified into metals and non-metals. State six properties of metals which differ from non-metals.
Answer: 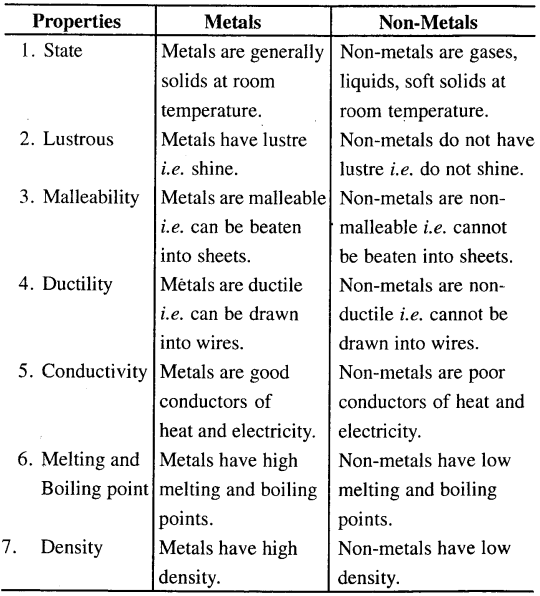 Question 4.
Give the symbols of the following elements – and state in each case whether they are metals, non-metals, metalloids or noble gases. 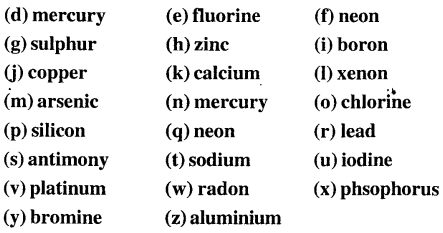 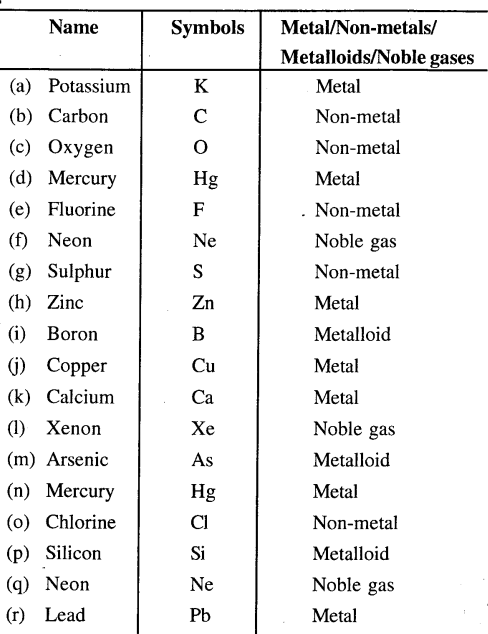 Question 6.
Give three reasons why – carbon dioxide is considered a compound, while carbon – an element.
Answer:
Carbon dioxide (C02) has a formula and properties of C02 to extinguish fire etc. are quite different from the properties it constituents carbon and oxygen. Oxygen (O) and carbon (C) are elements as these are made up of one kind of atoms. Also carbon is combustible and oxygen is supporter of combustion

Question 7.
State what information is provided by the formula of calcium hydroxide – Ca(OH)2
Answer: 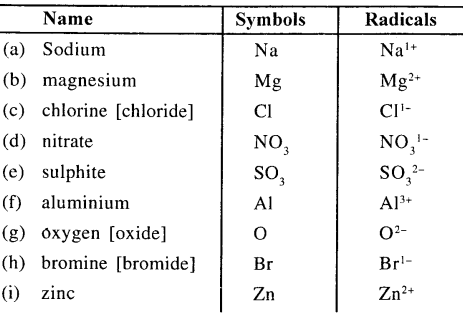 Question 11.
Give the formulas of the following acids:
(a) hydrochloric
(b) nitric
(c) sulphuric
(d) carbonic — acid.
Answer:

Question 13.
Explain the term mixture. Differentiate between a homogenous and a heterogeneous mixture with one example of each in the (a) solid-solid (b) solid-liquid If (c) liquid-liquid state of the mixture.
Answer:
Mixtures:
“Are made up of two or more elements or compounds or both mechanically mixed together in any proportion.”
Examples:

Question 15.
State the correct technique for separation of the following mixtures.
(a)  a sublimable solid and a non-sublimable solid.
(b) a liquid component from soluble impurities in the liquid component.
(c) a lighter liquid from a heavier liquid.
(d) a low boiling point liquid from a high boiling point liquid.
(e) solid constituents in a liquid constituent by adsorption.
Answer:
(a) By sublimation
Common salt + ammonium chloride on heating ammonium chloride sublimes common salt does not sublime and remains in the evaporating dish.
(b) By evaporation: Liquid is made to evaporate leaving behind the solid.
(c) By separating funnel: The heavier lower layer passes into the beaker on opening the stop-cock. Close the stop-cock as lighter layer reaches the tip. Lighter layer will remain in the funnel.
(d) By fractional distillation: Miscible low boiling point liquid will evaporate and is collected in the receiver, leaving behind the miscible high boiling point liquid in the flask.
(e) The method used is chromatography

Question 16.
Give –
(a) The principle involved in separation of the mixture
(b) The technique of separation for each of the following mixtures.
(1) Naphthalene and sodium chloride
(2) Common salt from a solution of common salt in water
(3) Pure water from impure water
(4) Kerosene and water
(5) Methyl alcohol and water
(6)Dyes of an ink
Answer:
(1) By Sublimation 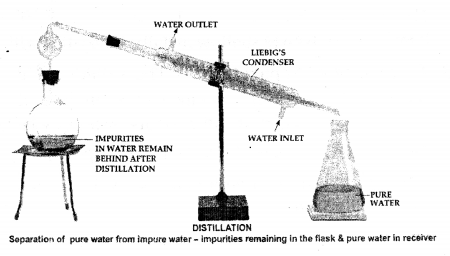 Principle — Based on the separation of mixture of two miscible liquids, with different boiling points. 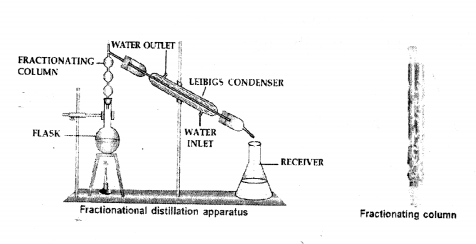 Principle — Chromatography is-a method by which the various components of a mixture e.g. dyes in an ink, are separated due to their difference in rate of flow over an absorbent medium i.e. stationary phase e.g. filter paper under the influence of a solvent i.e. the mobile phase.
Chromatography — There are two phases and they are:
Stationary phase in chromatography, the adsorbent medium is known as the stationary phase e.g. filter paper made of cellulose.
Mobile phase the solvent or the solution that moves due to capillary action is known as the mobile phase.
Technique of Separation — Separation of dyes in ink by paper chromatography Ink prepared by dissolving different dyes e.g. A, B, C, D in a suitable solvent, is taken.A line is drawn with a pencil over a long strip of a filter paper.
Place the ink spot containing the different dyes on the filter paper as shown below.
The filter paper is then hung with its lower end dipped in a suitable solvent.
The solvent maybe a mixture of ethyl alcohol and water poured into a tall jar, such that only a small lower part of the jar is filled.
The paper strip with the spot of ink at its, is dipped into the solvent in a way that the spot itself remains above the liquid surface.
The solvent flows over the ink spot and the various components of the mixture, of dyes in the ink are separated as shown below. 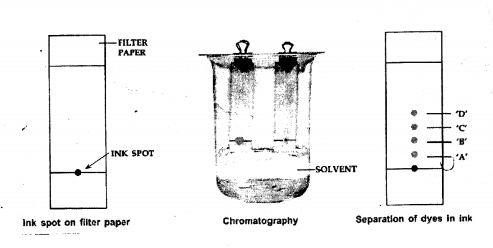 An element present in the earth’s crust, atmosphere and human body.
Ans. B: Oxygen

A compound containing carbon, oxygen and calcium.
Ans. A: Chalk

A non-metal which exists in the liquid state.
Ans. D: Bromine

2. Select the correct answer from the choice in bracket.

A homogenous mixture, [brass/dust in air/chalk and water]
Ans. brass

3. Match the ideal method of separation of components in a mixture in List I with the – appropriate process in List II. 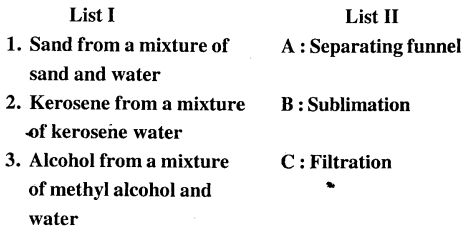 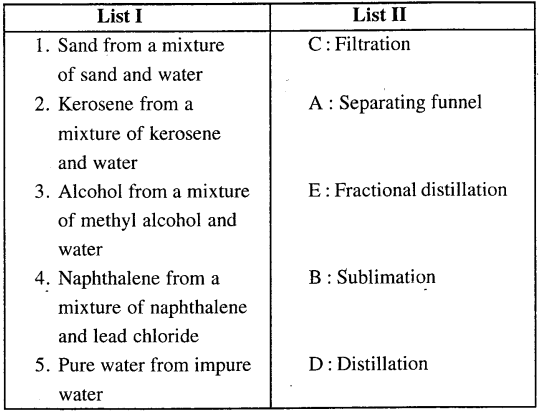 4. Give reasons for the following statements :

Question 3.
Components in a mixture are present in varying proportions and not in a fixed proportion.
Answer:
A mixture is an impure substance containing more than one element or compound, mechanically mixed together in any proportion and the mixture retains the properties of its constituents i.e. elements or compounds.

Question 4.
Gunpowder is an example of a heterogenous mixture.
Answer:
Because Gun powder is produced by mixing two or more substances in any proportion by weight.

The heavier liquid component from – mercury and water.
Ans. Mercury.

The compound containing one atom of sulphur and two atoms of oxygen.
Ans. Sulphur dioxide.

An acid whose formula is ‘H2CO3’.
Ans. Carbonic acid