Question 1.
State the meaning of the term – (a) atom (b) molecule (c) radical – with a suitable example.
Answer:
(a)
Atom: It is the smallest particle of an element, which is made up of only one kind of atoms. Atoms are built up of sub-atomic particles protons, neutrons and electrons.
(b)
Molecule: “The smallest particle of a substance which can exist on its own and retains the physical and chemical properties of the substance is called molecule.”

Question 3.
In the Modern Periodic Table – atoms of all elements are arranged according to the their increasing order of – atomic numbers. An atom of nitrogen has seven protons and seven electrons. State what would be its atomic number.
Answer:

Question 4.
State the main points of contradition of Dalton’s atomic theory by the Modern Atomic Theory.
Answer:
Dalton’s Atomic Theory:
The main postulates of theory are:

Question 8.
A.radical takes part – unsplit in a chemical reaction and retains its identity in reactions. With reference to the radical – (a) ammonium (b) bisulphate (c) carbonate – state the group of atoms present in each radical.
Answer: 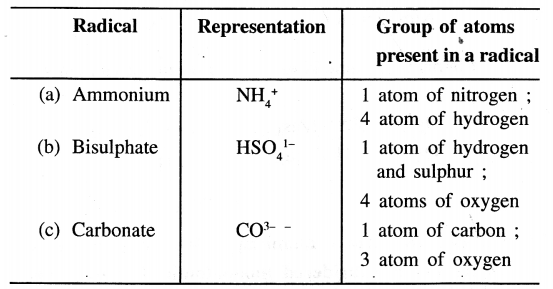 
Question 10.
Name the cation and the anion in the salt – calcium sulphate.
Answer:
In a salt the positive and negative parts exist as ions.

Question 11.
Explain the term – ‘valency’. State giving reasons the valency of –
(a) Chlorine in hydrogen chloride
(b) Sulphate in sulphuric acid
(c) Nitrogen in ammonia
(d) Magnesium in magnesium oxide
Answer:
Valency of an element or radical is the number of hydrogen atoms which can combine with or displace one atom of the element or radical forming a compound.

Valency of some elements which do not combine with hydrogen then becomes the combining power of the dement with an element whose valency is known.
e.g. Magnesium combines with oxygen forming magnesium oxide MgO
Valency of oxygen is two hence valency of magnesium is Two.

Question 12.
Give the symbol and valency of the following elements and radicals. 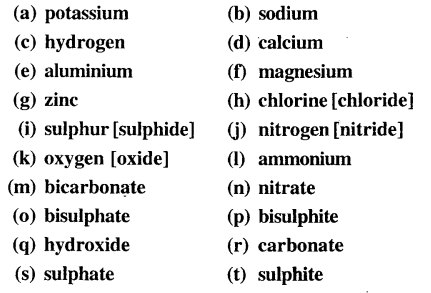 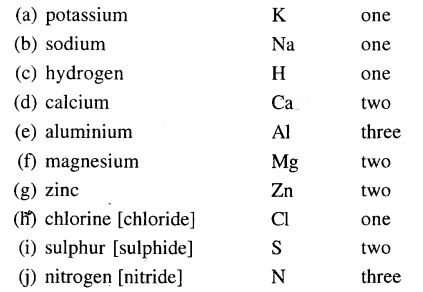 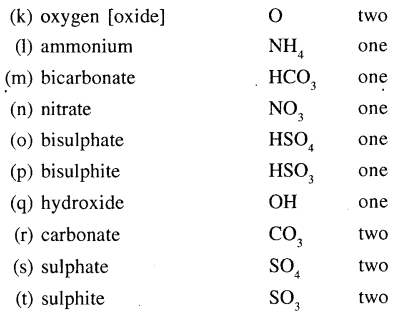 Question 14.
State what is meant by the term – ‘chemical formula. Give the chemical formula of –
(a) sodium hydroxide (b) sodium nitrate (c) sodium bicarbonate
(d) sodium sulphite(e) magnesium nitrate (f) ammonium sulphate
(g) carbonic acid (h) calcium phosphate
Answer:
Chemical formula is the representation of a substance by means of symbols.
It denotes in a compound, the number of atoms of each element present.
(a)

Question 15.
‘Dilute hydrochloric acid is added to sodium hydroxide’. Give a word equation and a molecular equation of the same. Is the equation written, a balanced equation. Give reasons.
Answer:
Word equation:
Sodium hydroxide + hydrochloric acid → sodium chloride + water
Molecular equation: NaOH + HCl → NaCl + H2O
No. of atoms of each element of reactant/s = No. of atoms of each element of product/s.
Therefore, the above equation is said to be balanced equation.

Question 16.
State what the group number in the Modern Periodic Table signifies. Give a reason why elements in the same group, have similar valency and similar chemical properties.
Answer:
Group number signifies the number of electrons in the outer shell of an atom of the element.

1. Fill in the blanks with the correct words from the brackets.

2. Select the correct answer from A, B, C, D and E for each statement given below:

4. State the correct formula of the following from the list given: