Vocabulary for Working with Trigonometric Graphs

A sine wave, or sinusoid, is the graph of the sine function in trigonometry. In addition to mathematics, this function also occurs in other fields of study such as science and engineering. This wave pattern also occurs in nature as seen in ocean waves, sound waves and light waves. Even average daily temperatures for each day of the year resemble this wave. The term sinusoid was first use by Scotsman Stuart Kenny in 1789 while observing the growth and harvest of soybeans.

Let’s see what vocabulary is needed to discuss sinusoids and other trigonometric graphs.

amplitude:
The amplitude of a sinusoidal function is one-half of the positive difference between the maximum and minimum values of a function. 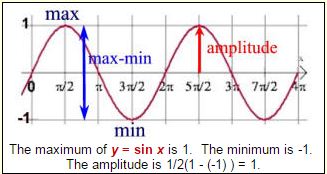 Amplitude is the magnitude (height) of the oscillation (wave) of a sinusoidal function. Sometimes it is referred to as the “peak from center” of the graph. 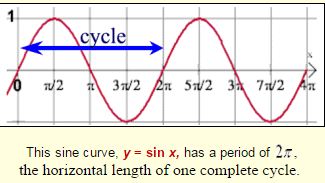 A periodic function is an oscillating (wave-like)function which repeats a pattern of y-values at regular intervals. One complete repetition of the pattern is called a cycle. The period of a function is the horizontal length of one complete cycle.
In functional notation we could say: The period is the smallest value of k in a function f for which there exists some constant k such that
f (t) = f (t + k) for every number t in the domain of f. 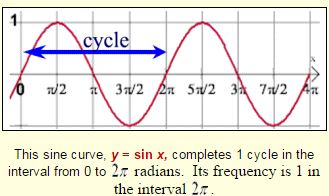 The frequency of a trigonometric function is the number of cycles it completes in a given interval. This interval is generally radians (or 360º) for the sine and cosine curves. 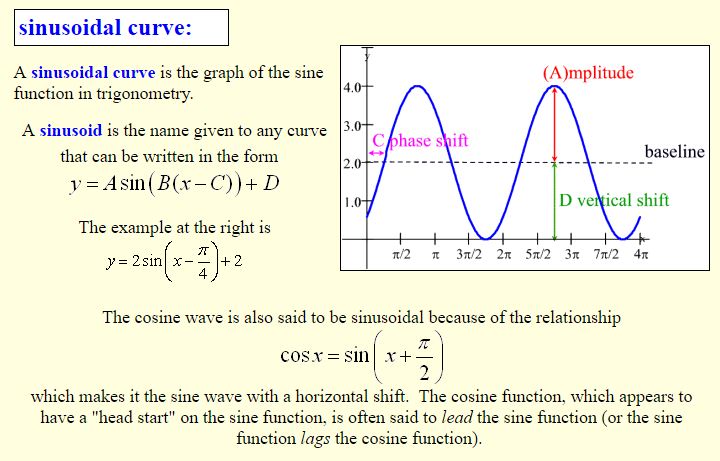 horizontal shift:
From the sinusoidal equation, 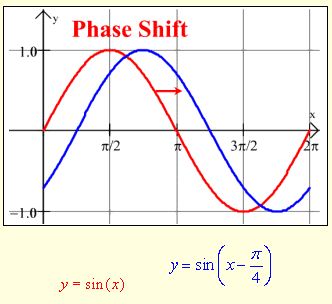