The Trail History and Civics for Class 8 ICSE Answers

Question 2.
What is the significance of the Third Battle of Panipat?
Answer:
The Maratha army was decisively defeated by Ahmad Shah Abdali at the Third Battle of Panipat in 1761. The Maratha ambition of replacing the Mughal empire lay scattered on the plains of Panipat. The Afghans, too, failed to capitalize on their victory. The conditions were ideal for the entry of another powerful contender for superemacy – the English East India Company.

Question 4.
How did political and economic stability in Awadh impact cultural development in Lucknogf?
Answer:
The Nawabs of Awadh were intelligent, efficient and order, introduced revenue reforms and strengthened their army. The prolonged period of peace and economic prosperity stimulated the growth of a refined and distinct Lucknavi culture. Lucknow, the capital city, blossomed into a centre for creative and performing arts, literature and architecture.

Question 5.
How did political instability in the Carnatic benefit the European trading companies?
Answer:
Carnatic, however, freed himself from the Nizam’s control and established hereditary rule in his state. This led to wars of succession and political instability in the Carnatic, providing the European trading companies opportunities to interfere in its internal affairs and make territorial, commercial and financial gains.

Question 8.
Name the signatories of the Treaty of Amritsar.
Answer:
Ranjit Singh signed a treaty of ‘perpetual friendship’ with Lord Minto.

Question 1.
The second phase of Maratha history was a period of dominance of the peshwas. In this context answer the following questions:
(a) State the circumstances that led of the growth of peshwa dominance in the Maratha kingdom.
(b) Discuss the achievements of

(c)
A major development at this time was the rise of the prominent Maratha families-the Sindhias, the Bhonsles, the Holkars and the Gaekwards. The peshwa divided the erstwhile Mughal provinces into ‘spheres of influence’ and placed them under the chiefs of these Maratha families. These chiefs enjoyed maximum autonomy within their respective regions. The peshwa was the official head of this loose union of Maratha chiefs which is referred to as the Maratha confederacy.

Question 2.
With reference to the rise and growth of Bengal as regional power, discuss the following:
(a) The achievements of Murshid Quli Khan
(b) The rule of Alivardi Khan
(c) The failures of the nawabs of Bengal
Answer:
(a)
Murshid Quli Khan was an excellent administrator and a man of exceptional abilities. He freed Bengal from external and internal dangers and established stability, peace and prosperity in the state.
(b)
Alivardi Khan recognized the importance of promoting trade and encouraged merchants-Indian as well as fdreign-to carry on trde in Bengal. He, however, did not allow the French and British merchants to fortify their factories in Chandemagore (now Chandannagar) and Culcutta (now Kolkata), respectively.
(c)
The nawabs of Bengal, however, failed to understand the true nature and ulterior motives of the British trading company. They believed that a trading company could never challenge (heir authority. No efforts were made to reorganize and strengthen the army. Corruption was rampant and even high-ranking officials were susceptible to bribes. These weaknesses made Bengal a happy hunting ground for the aggressive and imperialistic ambitions of the British.

Question 3.
The collapse of the Vijayanagar kingdom was followed by emergence of the powerful kingdom of Mysore. In this context discuss the following:
(a) The collapse of the Vijayanagar empire
(b) The achievements of Hyder Ali
(c) The contribution of Tipu Sultan
Answer:
(a)
The collapse of the powerful Vijayanagar empire in the 17th century gave rise to a number of independent kingdomes, constantly at war with one another. The most important of these was the kingdom of Mysore which had somehow managed to preserve its independence despite repeated attacks by neighbouring kingdoms. In the middle of the 18th century, Mysore, under the leadership of Hyder Ali, emerged as one of the most powerful kingdoms in the south.
(b)
In 1761 Hyder Ali overthrew the government and established his authority over the Mysore state. Under his rule, Mysore became a prosperous and powerful state and a formidable adversary of the English East India Company in the south.
(c)
Tipu Sultan proved to be a worthy successor. He introduced many reforms to overhaul and reorganize the administrative machinery. He modernized the army and strengthened the economy by encouraging agriculture and modem trade and industry.

Question 4.
With reference to the rise of independent Rajput states and the establishment of the Sikh kingdom, answer the following questions:
(a) Why did the resurgent Rajputs fail to establish an empire in India?
(b) To what extent was Guru Gobind Singh responsible for the transformation of the peace-loving Sikhs into a martial race?
(c) Discuss the achievements of Ranjit Singh.
Answer:
(a)
The Rajputs fail to establish an empire in India because they were busy in looking for their individual goals and interests which were often divergent and conflicting. They made no efforts to establish a Rajput empire, instead they were busy in finishing their energies in petty quarrels. The Rajput courts like the Mughal one’s were busy in conspiracies and corruption, which led to their failure.
(b)
Guru Gobind Singh, the tenth and last Sikh guru, organized a military brotherhood of Sikhs called the Khalsa. He instilled in the peace-loving Sikhs a martial spirit that would help them to carry on their struggle against the persecution of the Mughals.
(C)
Ranjit Singh, chief of one of the misls, was a bom leader. He brought all the Sikh chiefs to the west of the Satluj under his control and made himself master of Punjab by the end of the 18th century.

This is picture of the founder of the kingdom that extended the Khyber Pass in the north to Sindh in the south. 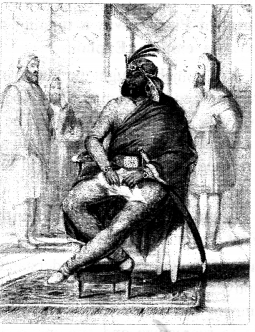 1. Identify the person in the picture.
Ans. Ranjit Singh.

2. Name the kingdom founded by him.
Ans. Punjab.

3. What did he do to expand his kingdom?
Ans. He brought all the Sikh chiefs, west of the Sutlej, under his control and made himself master of Punjab by the end of 18th century.

4. Name the treaty signed between him and the English East India Company.
Ans. Treaty of Amritsar.

5. What effect did this treaty have on his policy of expansion?
Ans. Due to his expansionist policy, he became master of a powerful kingdom which extended from the Khyber Pass in the North to Sind in the South.

Question 2.
The conquest of Punjab was a turning point in the history of the Maratha empire. Explain.
Answer:
The conquest of Punjab brought the Maratha’s into direct conflict with the Afghan general, Ahmad Shah Abdali. A major struggle for mastery over North India began. The Maratha army was decisively defeated by Ahmad Shah Abdali at Panipat land. Their dream to replace the Mughal empire in North India was also scattered.

Question 4.
How did Hyder Ali become the ruler of Mysore?
Answer:
Hyder Ali was a man of exceptional qualities and abilities. He rose from the rank of an ordinary soldier in the Mysore army to the position of commander by his efficiency and determination. In 1761 he overthrew the government and established his authority over the Mysore state.