Question 8.
Why did the religious beliefs of the Bhakti cult gain mass popularity?
Answer:
Bhakti cult which believed in selfless devotion to God gained mass popularity as this cult was inexpensive and simple.

Question 2.
How did Chandragupta Vikramaditya strengthen his power and position through

Answer:
Matrimonial alliances:
Chandragupta Vikramaditya strengthen his position by matrimonial alliance. He married the daughter of a powerful Naga ruler. He gave his daughter in marriage to the Vakataka ruler in the Deccan from whom he got valuable help during his campaigns against the Sakas.
War:
Chandragupta extended the western boundaries of his empire to Arabian Sea by defeating the Saka ruler. This was a very important victory because it gave the Guptas control over the three great seaports on the western coast. These were outlets to vast overseas trade. This led to economic growth and prosperity. He moved his capital to Ujjain.

Question 3.
What according to Fa Hien was the condition of the people during the Gupta period?
Answer:
According to Fa Hien’s account the people were honest, secure, prosperous and happy during Gupta Period. There was no capital punishment, for very serious crimes like treason and rebellion the right hand was cut off. Criminals were usually fined. Taxes were light.

Question 4.
Rapid progress was made during the Gupta period in the fields of
(1)Astronomy and
(2) Mathematics. Explain.
Answer:

Question 5.
How do we know that
(1) The science of metallurgy was highly advanced and
(2) Education was encouraged during the Gupta period?
Answer:

G Picture study.
This is a picture of the ruins of an ancient university. 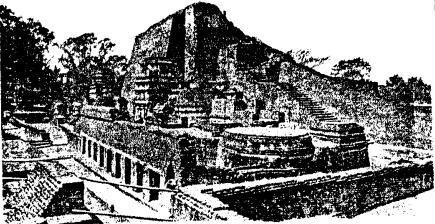 1. Identify the university.
Ans. This is a picture of Nalanda University.

2. Mention the subjects taught in this university.
Ans. Medicine, astronomy grammar philosophy, and Vedic literature were taught in Nalanda University.

4. What contributions did this dynasty make in the fields of
(1) astronomy (2) metallurgy (3) literature ?
Ans.
(1) refer Ans. F. (4) (1)
(2) refer Ans. F. (5) (1)
(3) Literature: During this period Kalidasa wrote famous play Shakuntala and the epic poem Meghaduta. The Panchatantra was compiled, the Puranas were rewritten, and the Mahabharata was revised and rewritten during this period. Shudraka’s  Mrichchhakadka was also written during this time.

Question 4.
Who was Fa-Hien? What does he tells us about the people of India?
Answer:
Fa-Hien was a Chinese scholar. He came to India from China during the reign of Chandragupta II.
He tells us that people of India were honest, secure, prosperous and happy. Criminals were not punished but fined. Taxes were light. There was no spy system.

Question 5.
Who were the Huns? How did they affect Gupta kingdom?
Answer:
They were nomads. They attacked Northern India in the fifth century.
Huns has destroyed the Gupta empire and shattered political unity of India.

Question 6.
Why is the Gupta period called ‘Golden Age’ of Ancient India?
Answer:
The Gupta period is called ‘Golden Age’ of the ancient India because a tremendous progress in all fields like science, astrology, mathematics, art and sculpture and literature was made which made people happy and prosperous. Moreover the moral based society carried religious tolerance and respect for other religions. The government did’n interfere in the daily life and work of the people.

Question 7.
What progress did the Guptas make in the Medicine?
Answer:
Vegabhatta and Dhanvantri were famous physicians and surgeons who served the people during this period.