A sphere is a set of points in three-dimensional space equidistant from a point called the center. The radius of the sphere is the distance from the center to the points on the sphere.

Spheres are not polyhedra. Of all shapes, a sphere has the smallest surface area for its volume.

The surface area of a sphere is four times the area of the largest cross-sectional circle (called the great circle).

A great circle is the largest circle that can be drawn on a sphere. Such a circle will be found when the cross-sectional plane passes through the center of the sphere.

The equator is an examples of a great circle. Meridians (passing through the North and South poles) are also great circles.
The shortest distance between two points on a sphere is along the arc of the great circle joining the points. 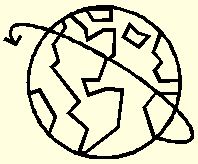 What happens when planes intersect with spheres?
1. The intersection of a plane and a sphere is a circle.

2. If two planes are equidistant from the center of a sphere (and intersecting the sphere), the intersected circles are congruent.

A hemisphere is the half sphere formed by a plane intersecting the center of a sphere.