What is alkenes and examples?

What is the general formula for an alkene?

How do you name alkenes?

Name the alkene molecule with the structure given below.

What is the structure of an alkene?

The first member of the alkene family is ethene, C2H4. A model of the ethene molecule is shown in Photograph.

The second member, propene, C3H6, is obtained by following the following steps.

By using similar steps, the structural formulae of the other members of the alkene family can be obtained.

Table shows the names and molecular formulae of the first nine straight-chain alkenes. 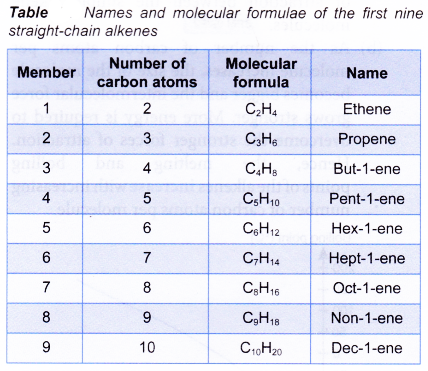 What are the physical properties of alkenes?

What are the chemical properties of alkenes?

Properties of alkanes and alkenes

Experiment to compare the chemical properties of alkanes and alkenes

A. Reaction with oxygen.

B. Reaction with bromine