Definition:
The curves obtained by intersection of a plane and a double cone in different orientation are called conic section.

General equation of a conic section when its focus, directrix and eccentricity are given: 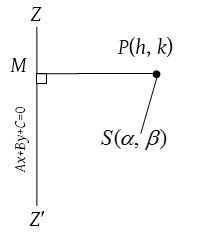 Let P(h, k) be any point on the conic. Let PM be the perpendicular from P, on the directrix. Then by definition,
SP = ePM ⇒ SP2 = e2PM2

Case II: When ∆ ≠ 0.
In this case equation (i) represents the non-degenerate conic whose nature is given in the following table.