What is the Process of Metallurgy

The various steps used in metallurgy are listed below.
1. Enrichment or dressing of the ore
2. Conversion of the enriched ore into the oxide of metal
3. Extraction of metal from the metal oxide
4. Refining or purification of the metal
Enrichment or dressing of an ore :
An ore mined from the earth’s crust contains a number of impurities (gangue), which must be removed. The ore, free from gangue, then becomes suitable for subsequent treatment. Enrichment or dressing of an ore is carried out by the following methods.
(i) Levigation : The powdered ore is washed in a jet of water. The lighter, rocky and earthy impurities are washed away by water, while heavier ore particles are left behind to settle down at the bottom. This process is also called hydraulic washing. (ii) Froth floatation : Sulphide ores of copper, lead and zinc are generally concentrated by this method.

The finely powdered ore is mixed with water and a small amount of oil in a tank. Air is blown into the mixture. A froth or scum is produced at the surface. The ore particles are carried by the froth to the surface. The earthy impurities sink to the bottom. The froth along with the ore is removed. An acid is added to break up the froth. The concentrated ore is filtered and dried.
(iii) Liquation : This process is used to concentrate the ore whose melting point is lower than that of the impurities. Stibnite, an ore of antimony, is concentrated by this method. The impure ore is heated. The ore melts and flows along the surface. The impurities are left behind.
(iv) Magnetic separation : This method is used when the magnetic properties of the ore and the impurities are different. For example, tinstone, an ore of tin, contains wolfram as an impurity that is magnetic. To remove this impurity, the ore is finely powdered to make the magnetic and the nonmagnetic particles distinctly separate. The powdered tinstone is spread on a belt moving over electromagnetic rollers in figure. The wolfram, being magnetic, is attracted and gets collected in the pot near the magnet. Tinstone falls away from the magnet. 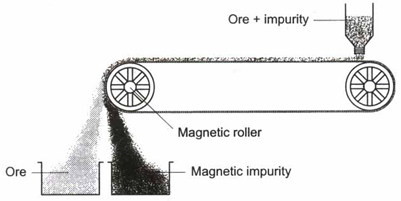 (v) Leaching or chemical separation : In this method, the powdered ore is treated with a suitable solvent. The ore dissolves in it while the impurities remain undissolved. For example, the bauxite ore contains Fe2O3, SiO2, etc., as impurities. The ore is powdered and treated with a solution of sodium hydroxide. A12O3 and SiO2 present in the ore dissolve, forming sodium aluminate and sodium silicate respectively. The impurities are left behind undissolved. The impurities are filtered off. The filtrate containing sodium aluminate and sodium silicate is stirred with some freshly prepared aluminium hydroxide for several hours. Sodium aluminate undergoes hydrolysis producing aluminium hydroxide as precipitate. The addition of aluminium hydroxide accelerates the precipitation of hydroxide. Soluble sodium silicate remains in solution. The precipitate, when filtered, washed, dried and ignited, gives pure alumina (A12O3).

Conversion of the enriched ore into the oxide of metal

It is easier to obtain metals from their oxides than from their carbonates or sulphides. Hence, the concentrated ore is converted into the oxide of metal which is then reduced to metal. This conversion to oxide is done by the process of calcination or roasting. In this process the ore is heated very strongly in the absence of air, keeping the temperature below its melting point so that volatile impurities are driven off.
Examples:
(i) Oxide ores are calcined to remove moisture and other volatile impurities.

CuCO3 . Cu(OH)  →  2CuO + H2O + CO2
Sulphide ores are usually converted to oxides by roasting. The process involves heating the ore at a temperature below its fusion point, but always in the presence of air so that it may be oxidized.
Arsenic and similar other elements present in free state or combined state are also oxidized to volatile oxides.
(i) Zinc blende (ZnS) is roasted in air to convert it into zinc oxide.

(ii) Galena (PbS) is converted into litharge (PbO) by roasting.

(iii) Cinnabar (HgS) is roasted to convert it directly into mercury (Hg).

Thus, both calcination and roasting produce oxide of the metal. However, there are a few points of difference between the two processes.

Extraction of metal from metal oxide :
A metal oxide thus produced is then reduced into metal. For this, the method used depends upon the reactivity of the metal being extracted. The following methods are used.
(i) Reduction by heat alone Metals occupying lower positions in the activity series can be obtained by heating their oxides.

(ii) Chemical reduction Metals in the middle of the activity series (Fe, Zn, Ni, Sn, etc.) cannot be obtained by heating their compounds alone. They require to be heated with a reducing agent, usually carbon (coke). When a metal oxide is heated with carbon, it is reduced to free metal.

The reduction of metal oxides with carbon is known as smelting. The impurities are removed as slag.

(i)   When zinc oxide is heated with carbon, zinc metal is obtained.

(ii)  When stannic oxide is heated with carbon, tin metal is produced.

(iii) Ferric oxide (Fe2O3) is reduced to iron by heating with coke in a blast furnace.

Some metal oxides cannot be reduced satisfactorily by carbon. For them, aluminium, a more reactive metal, is used. The process is called thermic process or alumino-thermic process.

(i)   Manganese dioxide is reduced to manganese by heating with aluminium.

(iii) Chromium sesquioxide is reduced by aluminium to chromium metal.

In the thermit process, aluminium powder is mixed with metal oxide. A piece of magnesium is set alight to start the reaction. The aluminium reduces the oxide to free metal.

In case of iron oxide, iron is obtained in the molten state. (The mixture of iron oxide and aluminium powder is called thermite). The molten iron may be allowed to trickle down to weld two iron objects together. Cracked machine parts, railway tracks, etc., are joined by this method. 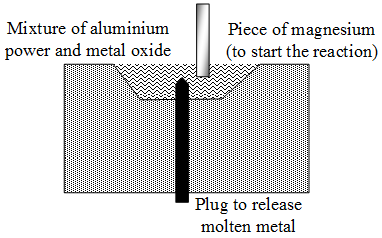 (iii) Electrolytic reduction : The reactive metals (high up in the activity series) cannot be produced by any of the above methods. They are obtained by electrolytic reduction of their molten oxides or chlorides. During electrolysis, the cathode supplies electrons to metal ions for their reduction to the metal.

(i)  Sodium metal is obtained by the electrolysis of molten sodium chloride.

(ii)  Magnesium metal is obtained by the electrolysis of molten magnesium.

The aluminium ions present in aluminium oxide go to the cathode and are reduced there to aluminium atoms.

Note : During electrolytic reduction of the molten salts, the metals are always liberated at the cathode.

The metal obtained from the ore is not pure. It contains various substances as impurities. The process of removing these impurities is called refining of the metal. Some of the methods generally applied for refining metals are discussed below. 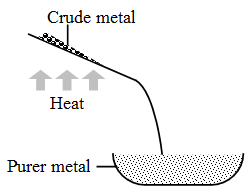 In this process, a sloping hearth is used. The hearth is kept at a temperature a little above the melting point of the metal. The impure metal is placed at the top of the hearth. The metal melts and flows down the hearth. The infusible impurities are left behind. This method is used in the purification of tin.

3. Poling :Copper is purified by this method. The molten impure copper (called blister copper) is stirred thoroughly with poles of green wood. The gases escaping from the poles reduce the oxide of metal to the metal. The surface of the molten copper is kept covered with powdered charcoal so that copper may not be reoxidized in contact with air.

4. Electrolytic refining : This method is widely used for purification of metals. Several metals such as aluminium, copper, tin, lead, gold, zinc and chromium are purified by this method. The impure metal is made the anode while a strip of pure metal acts as the cathode. A solution of the salt of the metal acts as the electrolyte.

On passing electric current through the solution, pure metal gets deposited on the cathode. The more reactive impurities present in the metal to be purified go into solution and remain there. The less reactive impurities fall to the bottom of the electrolytic cell.

In the present age of technological advancement, metals of high purity are required for special purposes. For example, pure germanium is needed for semiconductor devices. Uranium of high-grade purity is used as fuel in nuclear reactors.

1. Van Arkel method  : This method was developed by van Arkel to obtain ultra-pure metals. It is based on the thermal decomposition of metal compounds. It is used for obtaining pure titanium which is used in space technology. The impure titanium metal is converted into titanium tetra-iodide.

The air in the barrel used in this process is removed to create a high vacuum. An iodine bulb is broken. Titanium metal is heated which reacts with iodine to form gaseous titanium tetra-iodide.

2. Zone refining method : This method is capable of producing metals of high purity. Germanium, which is used in semiconductor devices, is purified by this method. In this method, advantage is taken of the fact that impure molten metal, when allowed to cool, deposits crystals of pure metal.

An impure germanium rod is provided with a circular heater. The heater is slowly moved along the metal rod. A band of the rod melts. As the heater moves away, the metal crystallizes out of the melt. The impurities are swept along the molten zone. Finally, the impurities reach the other end of the rod, and are removed.