Describe how to write a formula for a covalent compound

Method to deduce the formulae of covalent compounds

The molecular formulae of covalent molecules formed from non-metals of Group 14, Group 15, Group 16, Group 17 and hydrogen can be deduced as shown in Table.

The information in above Tables can be used to determine the formulae of covalent compounds as shown in the examples below.

1. Atom T has a proton number of 6. Atom W has 10 neutrons and a nucleon number of 19. Atoms T and W combine to form a compound. Determine the molecular formula of the compound.
Solution: 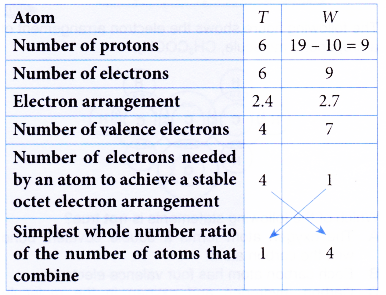 One atom of T combines with 4 atoms of W to form a compound.
∴ Molecular formula = TW4 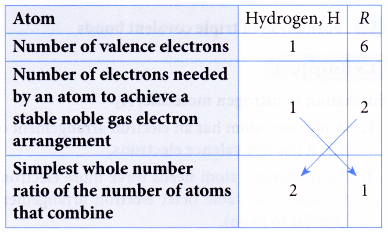 3. Non-metal J reacts with non-metal Q to form a molecule with the molecular formula JQ3. Which groups of the Periodic Table do J and Q belong to?
Solution:
Simplest whole number ratio of the number of atoms of J : Q = 1 : 3.

What is the difference between ionic and covalent bonds?

Comparison between the formation of ionic and covalent bonds: