Let’s start with a review of transformations in the coordinate plane.

Remember that a reflection is simply a flip. Under a reflection, the figure does not change size (it is an isometry). It is simply flipped over the line of reflection. The orientation (lettering of the diagram) is reversed. 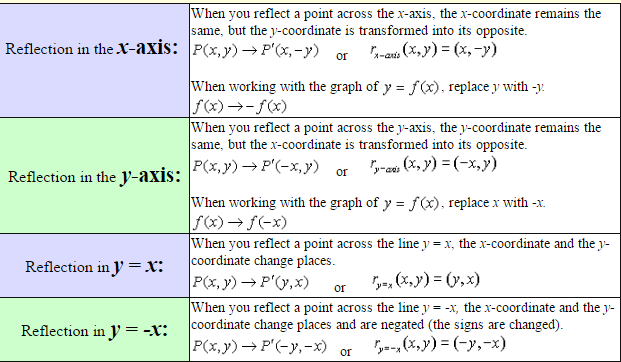 Point Reflections
A point reflection exists when a figure is built around a single point called the center of the figure. For every point in the figure, there is another point found directly opposite it on the other side of the center. The figure does not change size (it is an isometry).

A dilation is a transformation that produces an image that is the same shape as the original, but is a different size (the figures are similar). The description of a dilation includes the scale factor and the center of the dilation. A dilation “shrinks” or “stretches” a figure (it is not an isometry).

A translation “slides” an object a fixed distance in a given direction. The original object and its translation have the same shape and size (isometry), and they face in the same direction.