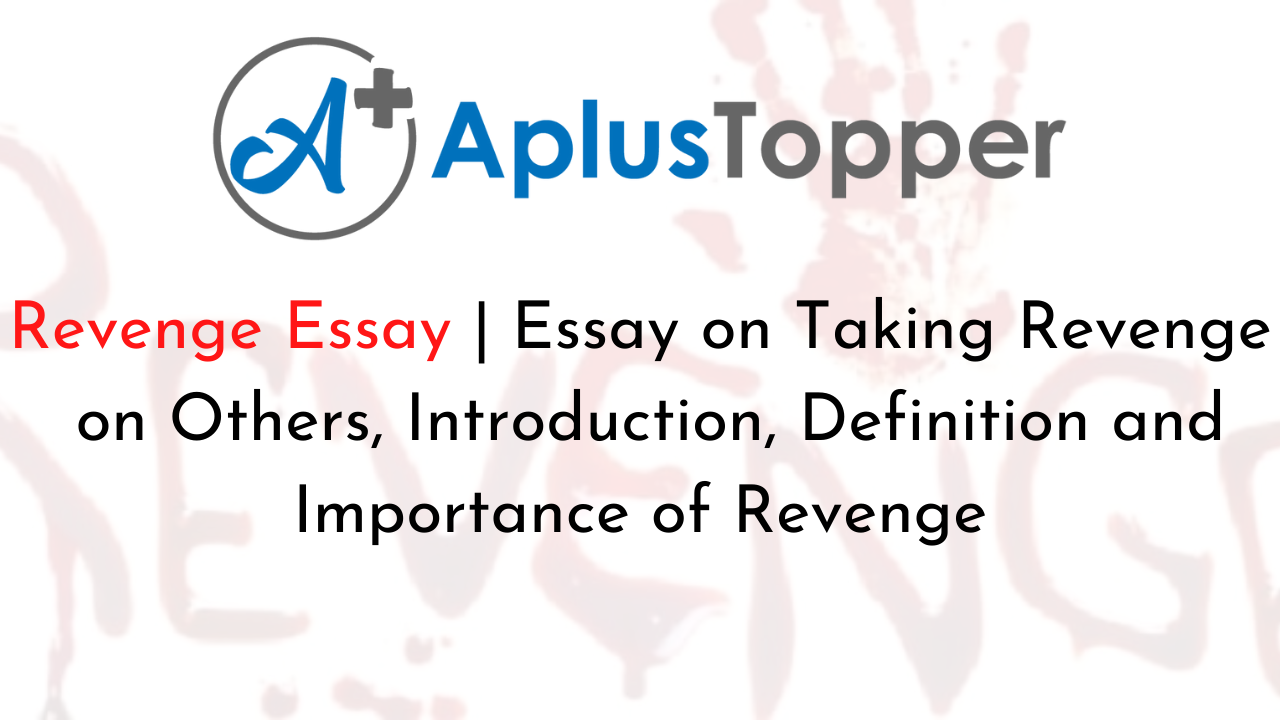 Revenge Essay: The concept of revenge, its origin, manifestation, and negative impact on people and nations. Revenge is the hostile outcome of human emotion that drives someone to hurt or do harm to others in retaliation for a wrong act done to him. The urge for revenge mainly originates from anger, hatred, envy, and grief. People seek revenge when they feel they have been attacked and suffered loss or injury in an unjustified manner by someone individually or collectively. As a result, they feel powerless, humiliated, or ashamed.

Revenge is an extremely unhealthy expression of emotions that takes a psychological and physical toll on the sufferer. It may evoke initial pleasure and satisfaction from the sufferings of the offender, but in the long run, those who take revenge end up feeling even worse and distressed. Psychological studies have found that instead of diminishing hostility, revenge prolongs the bitterness of the original offense. Revenge refers to the action that brings justice for wrongdoing done to someone. But it costs suffering or pain to the person affected by revenge.

Revenge has been a part of our history and mythology from ancient times. In a conflict to gain power and positions, concerned parties indulged in acts of revenge. Revenge can lead people to do horrible things, whether it is a dispute between family and friends or a large scale of terrorism. Terrorism is an act of revenge between two parties involving hilarious acts that usually kill a lot of innocent people. Revenge is something that can be planned and executed in different ways. The feelings of hatred and ego force people to do something wrong to get satisfaction for an injury or insult received. In the past, revenge might have been considered justified to settle scores with enemies. But, the present human society, with its highly developed intelligence and capabilities, does not encourage such crude practices.

The motive behind taking revenge is to make the enemy repent for his actions by putting him in distress and suffering. Someone takes revenge to do the maximum possible damage to his enemy, while he is struggling with his loss. People can be provoked to take revenge on others under various circumstances. Although many aspects of revenge support the concept of justice, revenge has a more damaging focus rather than a restorative one. When someone has been treated wrongly, the thought of getting revenge seems so appealing to him, but in reality, it can cause too much damage. Some people take hostile steps being instigated by religious or political sentiments. They don’t care what the consequences can be as long as they get the satisfaction of harming those who they consider enemies. They get psychological relief or pleasure by seeing the suffering of others.

People consider they have the right to take revenge as a form of private justice for wrongs done to them. Revenge is not a worthy solution because it is a form of punishing someone rather than giving justice or making something equal. To bring equality, you only end up losing lives, property, and relationships. Nothing is accomplished by revenge, rather it allows the chain of pain and suffering that continue to never end.

Taking revenge on someone also causes them to retaliate and take revenge on you. This process keeps going as a cycle until it becomes a devastating outcome involving families, societies, or even nations. Great leaders like Mahatma Gandhi pointed out that nothing can be gained from revenge and he stated that “An eye for an eye makes the whole world blind”. This quote represents the opinion that when everyone is involved in seeking revenge, there will be an end to humanity, and the survival of society will be at stake.

Revenge is a part of human nature that all people can relate to. So writers often use it in literature as a central theme. Revenge can easily be an attractive theme for a novel or movie because it reflects on the dark side of human character. People’s opinions on revenge may vary, some may think it is justified and some don’t. People, who think of taking revenge, are likely to feel guilty and regretful afterward. One might feel hurt or betrayed for time being but eventually, he may be able to put those feelings behind and avoid the possibility of further suffering. By taking revenge, you also instigate the person taking revenge on your wrongdoing and the cycle continues. Getting caught in a loop will only cause you further pain and agony. One can find a much better way of channeling the energy to move forward in a positive direction. Try to ignore the people who bring you down in the past, as they are not worth your time and energy.

Revenge is the act of causing damage to another person or community by some individual or group because they believe they are being hurt unjustly by the other. The mentality is doing the same wrong things that have been done upon you. The feelings that ignite the desire for revenge are grief, humiliation, anger, and hatred. Some people take things too personally that hurt their ego so they want to harm the person or community who contradicts them. This is mostly based on religious and political sentiments while claiming superiority in the game of power and position. But people often forget that things can be turned the other way round and all have to pay the price for doing harm and causing pain to others.

Revenge is not a justice

Revenge is an idea we are acquainted with through history, mythology, and other literary works. It is also a common theme for novels and movies to make them more interesting to readers and audiences. In many cases, the act of revenge is glorified or justified by showing the superiority of an individual or community over others. It portrays revenge as a way of giving justice in someone’s terms, using power and authority. It is not primarily about justice but only affirming someone’s right to retaliate against some wrong done to them, which is not right. The idea of revenge when spread among a large part of a community, it leads to terrorist acts causing harm to a huge number of people with loss of innocent lives.

An act of revenge may give an initial psychological relief by temporarily suppressing the grief and anger but sows the seed of bitter feelings in the society which stays much longer. The best way to get back on someone who hurt you is to improve yourself, develop capabilities and achieve something worthy. Instead of being vindictive or aggressive, you may consider the other person as an unimportant part of his life journey who can be ignored. This is also a form of revenge causing no harm to anyone but developing a sense of forgiveness and positivity.

Question 1.
What is revenge?

Answer:
Revenge is the action of hurting or harming someone in retaliation to a grievance or suffering caused by them.

Question 2.
What is an example of revenge by terrorism?

Answer:
The destruction of the twin towers in the USA was a terrorist act of revenge done by a group.

Answer:
Revenge doesn’t lead to any positive solution but rather traps people in the loop of bitter feelings that result in more retaliation and suffering.