Complete and balance the equations
Hydrogen 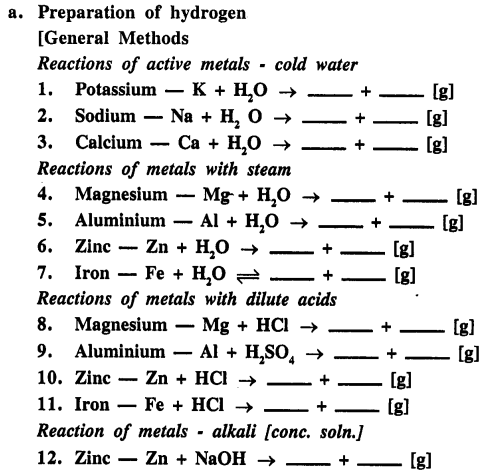 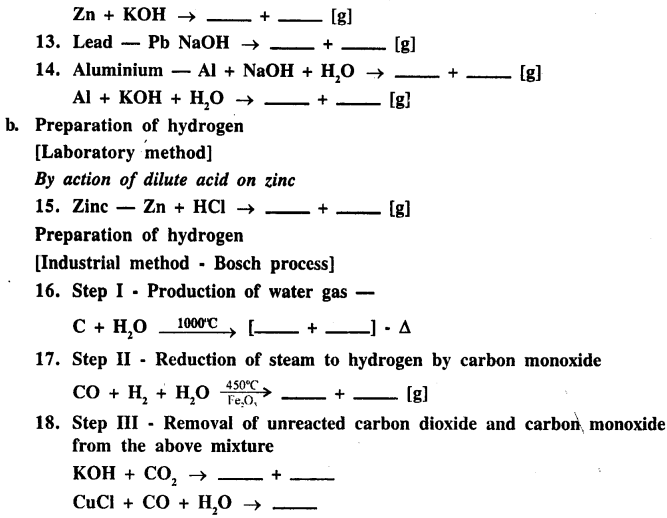 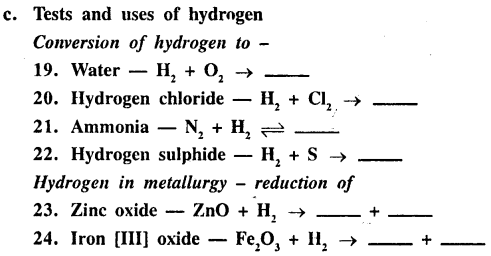 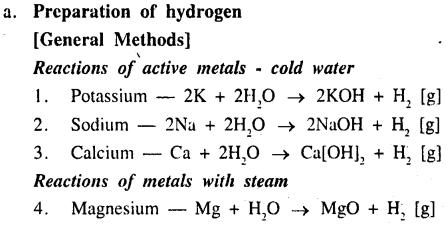 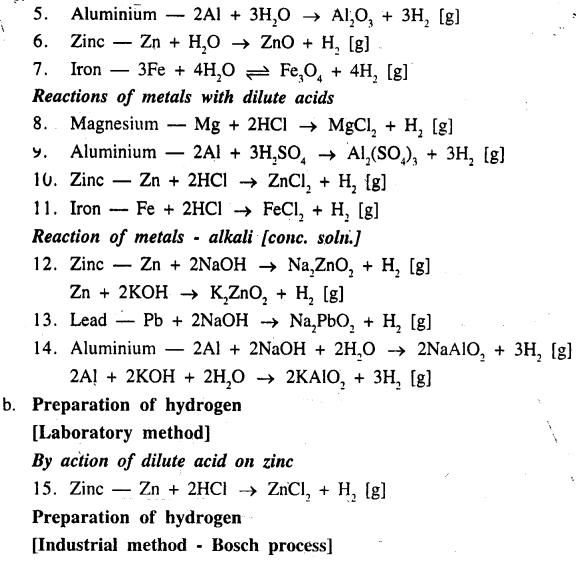 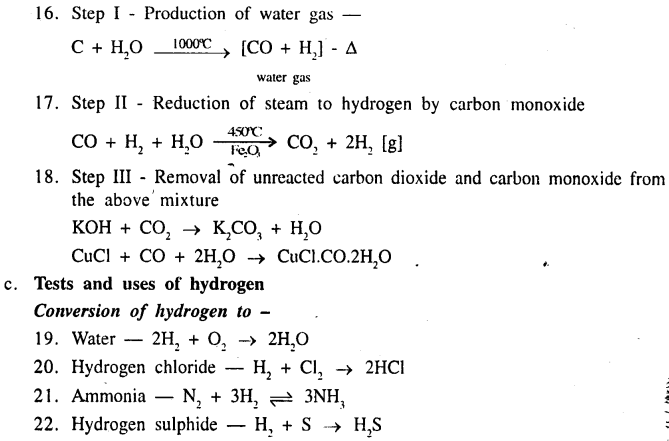 Question 1.(1986)
Name a gas which burns in air or oxygen forming water.
Answer:
The gas that burns in oxygen to form water is hydrogen.

Question 3.(1986)
Explain the following : Two jars of H2 are collected – “one burns quietly and the other does not”.
Answer:
‘One bums quietly’ is pure hydrogen and ‘which does not bum quietly’ is mixed hydrogen with air it explodes on burning.

Question 1.(1987)
Write correctly the balanced equation for the following : ‘When zinc filings are added to a concentrated solution of sodium hydroxide’.
Answer:

Question 2.(1987)
Describe one chemical test applied to the following gases, which would enable you to distinguish between them :‘carbon monoxide and hydrogen’.
Answer:

Question 2.(1988)
Explain briefly how hydrogen is manufactured on a large scale, from steam.
Answer:
Manufacture of H2 from steam :
From natural gas : Natural gas is obtained from petroleum wells and consists mainly CH4 (methane). It is mixed with steam at 30 atm. and passed over heated nickel 800°C, when water gas is formed.

Separation of CO : The gaseous mixture of [CO and H2] is passed through ammonical cuprous chloride solution in order to dissolve uncombined CO.

Thus hydrogen gas is left over.

Question 1.(1989)
State the products of the reaction “when steam is passed over red-hot iron”.
Answer:

When steam is passed over red hot iron, teriferric tetroxide and hydrogen are the ; products formed.

Question 1.(1990)
How can you obtain hydrogen from a mixture of hydrogen and carbon monoxide.
Answer:
See Q. 2. 1988. By dissolving the mixture in ammonical cuprous chloride. CO dissolves and H2 is left over.

Question 2.(1990)
What do you observe when a piece of sodium is dropped into cold water ?
Answer:
When a piece of sodium metal dropped in cold water we observe : Sodium floats on water surface melts forming a silvery globule which darts about the surface of water catches fire and burns with golden yellow flame.
Bubbles of hydrogen evolve and solution is soapy, slightly warm (alkaline) hence turns red litmus blue.

Question 1.(1991)
How would you obtain ‘hydrogen from sodium hydroxide’ solution other than by electrolysis ?
Answer:
By adding aluminium powder in cone, sodium hydroxide.

Question 1.(1994)
Place the metals calcium, iron, magnesium and sodium in order of their activity with water, placing the most active first. Write the equation for each of the above metals which react with Water.
Answer:

Question 2.(1994)
Why is copper not used to prepare hydrogen by the action of dilute hydrochloric acid or dilute sulphuric acid on the metal, [copper [Cu] below hydrogen – no reaction]
Answer:
Cu is below hydrogen in reactivity series and cannot displace H2 from acid and no-reaction takes place.

Question 2.
Give the general group characteristics applied to hydrogen with respect to similarity in properties of hydrogen with –

Question 3.
How did the name ‘hydrogen’ originate. How does hydrogen occur in the combined state.
Answer:
Hydrogen means in Greek – water former. Hydrogen initially called inflammable gass that it bums in air. It produces water. Lavoisier in 1783 established its name ‘hydrogen’ meaning water producer hydrogen in combined state : in a animal and plant tissues. As a constituent of : proteins, carbohydrates, fats, acids, alkalis, petrolium products and organic substances.

Question 5.
Give balanced equations for obtaining hydrogen from ?

Question 6.
State why hydrogen is not prepared in the laboratory by the action of –

(a) As sodium is very reactive and reacts with water violently, darts on the surface of water and collection of hydrogen becomes difficult.
(b) The reaction between calcium and dil. H2SO is highly explosive and practically not feasible.
(c) With lead dil. HCl forms PbCl2 which is in soluble and forms coating and stops the further reaction.

Question 7.
Give balanced equations for the following conversions.

(a) Sodium zincate from zinc
(b) Sodium plumbite from lead
(c) Sodium aluminate from aluminium.

Question 8.
In the laboratory preparation of hydrogen from zinc and dil. acid. Give reasons for the following :

(a) The complete apparatus is air-tight.
(b) Dilute nitric acid is not preferred as the reactant acid.
(c) The lower end of the thistle funnel should dip below the level of the acid in the flask.
(d) Hydrogen is not collected over air.

(a) The gas is highly inflammable, any leakage can cause explosion.
(b) Hydrogen produced is oxidised to water as nitric acid is powerful oxidizing agent.
(c) Otherwise gas produced will escape through thistle funnel.
(d) Air forms an explosive mixture with H2.

Question 12.
Compare the combustibility of –

(a) pure hydrogen
(b) hydrogen-air mixture.

Question 13.
State the reactant added to hydrogen to obtain the respective product in each case.

Question 14.
State the use of hydrogen –

Answer:
Use of hydrogen :
(a) As a fuel in the form of coal gas, water gas, liquid hydrogen.
(b) In hydrogenation of oil & coal :

(c) In extraction of metals : by reducing oxides of metals.

Question 15.
Explain the terms – oxidation and reduction in terms of addition and removal of oxygen/hydrogen with suitable examples.
Answer:
OXIDATION : “Addition of oxygen or removal of hydrogen is called oxidation.

Here H2S is oxidised to sulphur as removal of H2 takes place.
Reduction : Addition of hydrogen or removal of oxygen is called reduction.

chlorine is reduced, as addition of hydrogen.

Question 16.
Explain the term – redox reaction with an example involving – the reaction of hydrogen sulphide with chlorine.
Answer:
Redox Reaction : “The reaction in which oxidation and reduction takes place simultaneously is called Redox Reaction.”

Removal of hydrogen is oxidation. Here H2S is oxidised to sulphur whereas addition of hydrogen is reduction.
Here chlorine is being reduced to hydrogen chloride

Test For An Oxidising Agent :

Test For A Reducing Agent :

Q.1. Select from A to G the reactant added, to give the products 1 to 5, in the preparation of hydrogen gas.
A : dilute acid
B : dilute alkali
C : cold water
D : cone, alkali
E : boiling water
F : cone, acid
G : steam 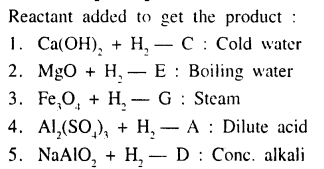 Q.2. Give balanced equations for the following conversions, 1 to 5. 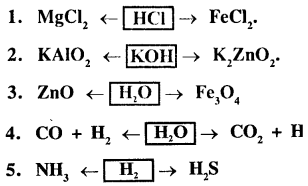 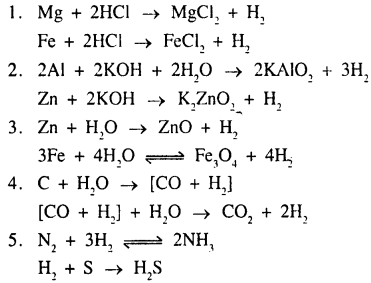 Q.3. Give reasons for the following.

Q.5. Select the correct answer from the symbols in bracket.

Q.6. The diagram represents the preparation & collection of hydrogen by a standard laboratory method.