Question 2.
Starting from zinc how would you obtain hydrogen using

[ Give balanced equations for each & name the product formed in each case other than hydrogen]. Name a metal which will not react with the reactants above to give hydrogen.
Answer:
To obtain hydrogen using :

(a) Steam : Metals above [H] in activity series of metals, i.e. Zn, Fe and Pb react with steam and form corresponding oxides.

Metals below [H] do not react even with steam. Metal are Cu, Hg, Ag, Pt and Au.
(b) With dil. acids : Metals like Zn, Fe, Pb form corresponding salt.

Cu and metals below Cu do not react with dil. acids.
(c) An alkali : Zn, Pb react with concentrated alkali on boiling to give the corresponding metallic salt and liberate hydrogen.

Question 3.
‘Hydrogen is obtained by electrolysis of acidified water’. Answer the following pertaining to the preparation of hydrogen by electrolysis, (a) The meaning of the term ‘electrolysis’ and ‘electrolyte’, (b) Name the electrode –

(a) Electrolysis : “Dissociation of water into hydrogen gas and oxygen gas by the passage of electric current is called electrolysis.”

Question 4.
In the laboratory preparation of hydrogen from zinc & dilute hydrocholoric acid – state a reason for

(a) Addition of traces of copper [II] sulphate to the reaction medium
(b) Collecting the hydrogen by downward displacement of water and not air & collecting it after all the air in the apparatus is allowed to escape
(c) Having the end of the thistle funnel dip below the level of the acid in the flask.

(a) Addition of traces of copper [II] sulphate acts as catalyst and speeds up the reaction.
(b) Hydrogen is collected by downward displacement of water as it is slightly soluble in water and in air it form explosive mixture with air and also hydrogen is lighter than air.
(c) Otherwise the gas formed will escape through thistle funnel.

Question 5.
In the industrial method of preparation of hydrogen by the Bosch process – give

(a) Balanced equations for the first two main steps in the production of hydrogen
(b) The reason for use of addition of a promoter to the catalyst in the final step
(c) The name of the solution which absorbs the unreacted carbon monoxide.

Answer:
(a) Bosch process for industrial production of hydrogen :

Question 6.
State the following pertaining to the physical properties of hydrogen :

(a) Colour and odour of hydrogen gas colourless. Odourless.
(b) Slightly soluble in water.
(c) No-effect i.e. colour does not change.

Question 8.
Starting from hydrogen gas how would you obtain

(a) A neutral liquid
(b) A basic gas
(c) A metal by reduction of its heated oxide.

[The metal formed is above iron in the activity series]
Answer:

Question 9.
Using a burning candle and a jar of hydrogen – how would you prove experimentally that (a) Hydrogen is a combustible gas (b) Hydrogen does not support combustion.
Answer:

(a) Hydrogen gas is combustible and bums at the mouth of the gas jar. When a burning candle is brought near the mouth of hydrogen in gas jar.

(b) Hydrogen extinguishes the burning candle when pushed inside the jar. This shows that hydrogen does not support combustion. 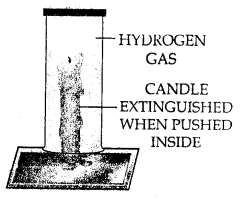 Question 10.
State a reason why, when hydrogen is passed over heated copper oxide, the resultant product formed, differs in colour from the original reactant.
Answer:

H2 removes oxygen from CuO and reduces it to Cu metal (reddish brown in colour).

Question 11.
With reference to the uses of hydrogen, give reasons for the following :

(a) Hydrogen is not used in air balloons
(b) A mixture of hydrogen & oxygen on burning, find application in welding & cutting metals
(c) Reaction of hydrogen with nitrogen under specific conditions finds industrial utility.

(a) Hydrogen gas in ‘highly inflamable’ i.e. catches fire. Hence generally it is not used in air balloons.
(b) Hydrogen and oxygen mixture on burning produces a high temperature upto 2800°C which is used for welding and cutting of metals.
(c) One vol. of N2 and 3 vol. of H2 in presence of a catalyst (finely divided iron) at 450-500°C and at 200-900 mm pressure forms basic compound ammonia [NH3] which finds applications in fertilizers and nitric acid [HNO3] and explosives.

Question 12.
Give a test to differentiate between two gas jars – one containing pure hydrogen and the other hydrogen-air mixture.
Answer:
When a burning splinter is brought near the gas jar containing, pure H2 bums with pale blue flame quietly.
H2 + Oxygen mixture bums with explosion.

Question 14.
With reference to the equation : Cl2 + H2S → 2HCl + S pertaining to a redox reaction – select the correct answer in each case –

Q.1. Give balanced equations for the following conversions :

CO2 is removed by dissolving the mixture obtained in water under pressure
By passing the mixture through water or KOH [Caustic Potash Solution]
2KOH + CO2 → K2CO3 + H20
Residual gas left is HYDROGEN.

Q.2. Give reasons for the following :

Question 3.
In the laboratory preparation of hydrogen from zinc and dilute hydrochloric acid – the zinc used granulated zinc.
Answer:
Granulated zinc contains traces of impurities which act as catalyst and increase the rate of production of hydrogen.

Q.3. Select the correct answer from A, B, C, D or E for each statement given below :
A: Nickel
B: Sodium
C: Iron
D: Iron [III] oxide
E: Magnesium oxide

Question 1.
A metal which reacts with water to give a metallic hydroxide & liberate hydrogen.
Answer:
B : Sodium

Question 3.
The metal used as a catalyst in hydrogenation of oils.
Answer:
A : Nickel

Question 4.
The metal which reacts with steam liberating hydrogen & the reaction is reversible.
Answer:
C : Iron

Question 5.
The metallic compound formed when a metal above aluminium in the activity series reacts with steam.
Answer:
E : Magnesium oxide

Q.4. Select the correct answer from the choice in bracket to complete each sentence.