Question 1.
Give the common name and chemical name of an ore of –
(a) zinc (b) aluminium (c) iron.
Answer: 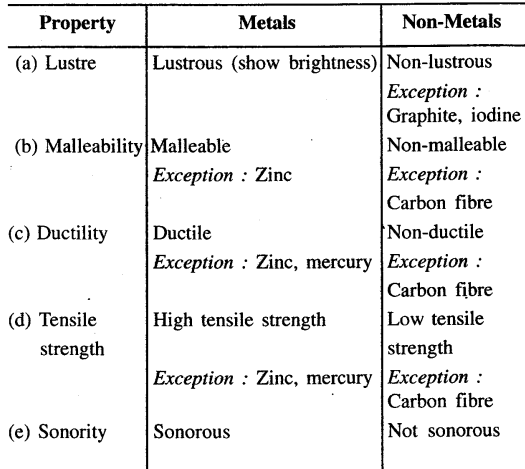 Question 4.
With reference to the following metals state their – use in daily life.Metals:
(a) copper (b) iron (c) aluminium (d) magnesium (e) zinc (f) lead (g) silver
Answer:
(a) Copper:

Experiment to prove that coal does not conducts electricity

Question 6.
Differentiate between metals and non-metals with reference to –
(a) number of electrons in outer or valence shell (b) formation of cation and anion (c) reaction with dilute acids.
Answer: 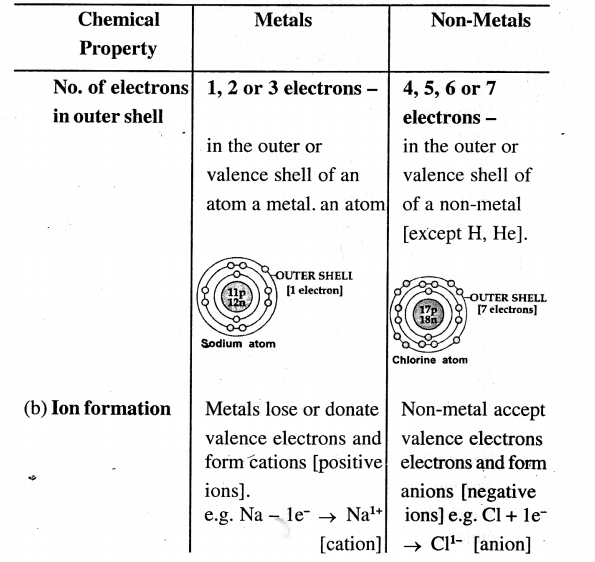 Question 8.
Give the basic demarkation of the Modern Periodic Table into metals, metalloids and non-metals with special reference to halogens and noble gases.
Answer:
Modern Periodic Table is the arrangement of elements in increasing order of atomic numbers.
There are total 118 elements, the first element i.e. the atomic number 1 is Hydrogen and the last element i.e. the atomic number 118 is Ununoctium.
The elements are categorized mainly into 4 types, and these are:

Question 10.
State what are metalloids. Name the elements recognised as metalloids. Compare the properties of metalloids with those of metals. State the uses of three different metalloids.
Answer:

They are too brittle, to have any structural uses in the pure form.

Question 11.
Explain the term – rusting and give a word equation for the formation of rust. If polished iron nails are kept in three separate test tubes, state the contents in each test tube required, to prove the conditions for rusting.
Answer:
The term Rusting involves slow oxidation of iron in presence of air and moisture which results in the formation of rust i.e. hydrated iron [III] oxide.
THE OXIDATION REACTION
Rusting of Iron

Iron when exposed to the atmosphere slowly reacts with the oxygen of the air, in the presence of moisture forming a brown coating called ‘rust’ on its surface. Rusting corrodes iron and reduces its structural strength.

Question 14.
State why galvanization, tinning and chromeplating are used as three different processes for coating specific articles for prevention of rusting.
Answer: 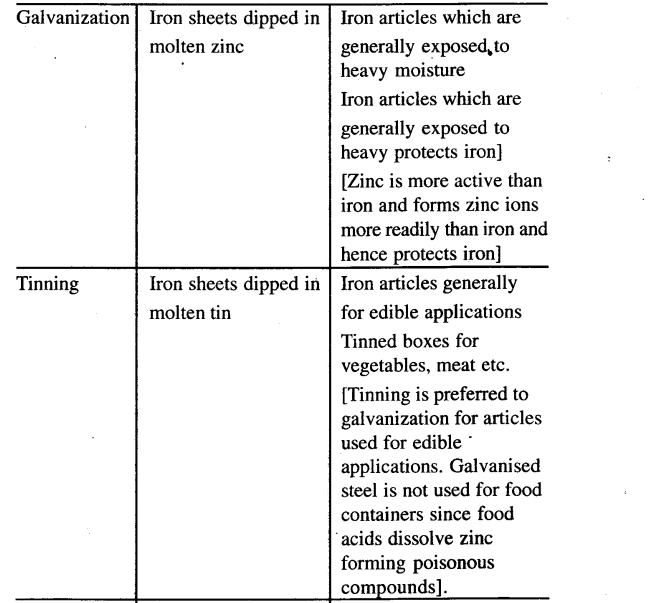 1. Complete the statements given below, by filling in the blank with the correct word/s:


2. Give reasons for the following:

1. Metals form cations while non-metals form anions.
2. Potassium reacts vigorously with cold water while copper does not react with water or steam.
3. Rusting reduces the structural strength of iron.
4. A suspension of rust is basic in nature.
5. Galvanized steel is not used for articles used for edible applications.
Answer:

4. Match the correct answer from A, B, C, D and E – for each statement given below:
A : Boron B : Chlorine C : Potassium D: Platinum E: Radon

5. State whether the statements given below are true or false. If false write the correct statement.