1. State the meaning of the terms —
Question 1(a).
Air
Answer:
Air is matter which occupies space, has mass, exerts pressure and is highly compressible.

Question 1(b).
Atmosphere
Answer:
The atmosphere is a layer which extends about 300 kms above earth’s surface.

Question 2.
Name the important scientists and their studies which led to the discovery of the components of air.
Answer:
Discovery of air: 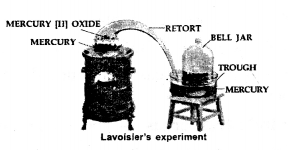 Question 4.
Tabulate the various components of air, including the components with variable composition.
Answer: 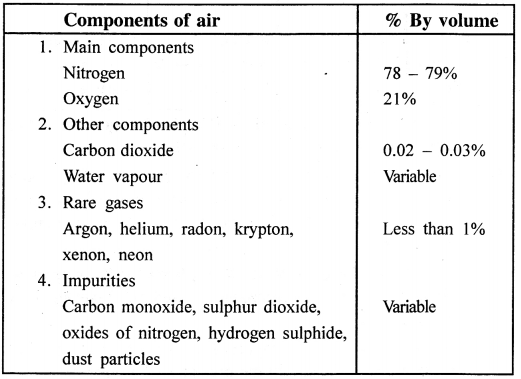 Variation in composition of air:

Question 5.
Compare the three main components of air e. nitrogen, oxygen and carbon dioxide with reference to their density and solubility, nature and reactivity.
Answer:

Question 6.
Of the total volume of air – 4/5th is nitrogen. State the utility or consequence of this ratio.
Answer:
The consequence of having 4/5 oxygen and 1/5 nitrogen in air would have been that earth would not have supported this kind of live and there would have been no balance of air and no photosynthesis.

Question 7.
State how nitrogen is utilised by plants for their growth. Give a reason why nitrogen is used in flushing food packages.
Answer:
Nitrogen of air is converted to soluble nitrogenous compounds in the soil in the presence of air and moisture. These-are absorbed by plants and converted to plant proteins.Nitrogen being inert or un reactive is filled into food packets to drive out the oxygen.
Hence bacterial growth inside the food package is reduced and thereby the food is well preserved and fresh.

Burning of a candle involves oxidation of the carbon & hydrogen present in the candle resulting in the formation of carbon dioxide, water vapour and energy in form of heat and light.

Respiration involves oxidation of the carbon & hydrogen present in food materials resulting in formation of carbon dioxide, water vapour and energy in the form of heat.

Question 9.
State the utility of carbon dioxide for manufacture of food by plants. State its role in warming the earth’s environment and in excess resulting in global warming.
Answer:
Photosynthesis— It is a natural process by which green plants manufacture food in presence of sunlight.
Carbon dioxide in the atmosphere is absorbed by the plants in the presence of chlorophyll [the green pigment in plants] & sunlight, hence resulting in the formation of carbohydrates.

Green house effect— It consist of infrared, visible rays & ultra violet rays, which heat up the earth.
Carbon dioxide in the atmosphere allows the reflected ultraviolet rays to pass through, but prevents the infrared radiations from being radiated out of the earth’s surface. Hence, it results in warming of the earth’s environment.

Question 10.
State the utility of –
(a) Water vapour
(b) Rare or inert gases present in the air.
Answer:Utility of water vapour:

(b)
Carbon dioxide in air:

Question 14.
Explain the term ‘air pollution’, with reference to air quality. State the sources of a few main pollutants.
Answer:
Air pollution:
Mixing of products (elements) from natural sources and man made sources to air, to make it unclean is called air pollution.

The various sources of air pollution are: 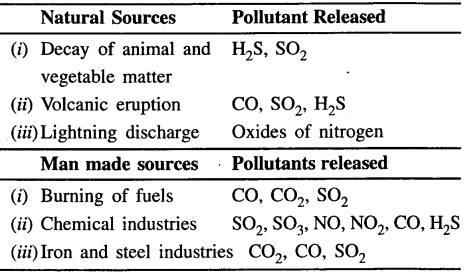 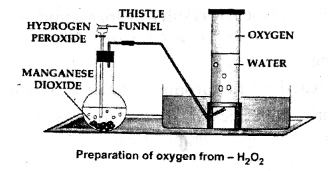 (b)
Catalyst used in preparation of oxygen is manganese dioxide. It increased the speed of decomposition of H2O2.

(d)
The method of collecting oxygen gas is by downward displacement of water.
The reasons are:
(1) Oxygen is very slightly soluble in water
(2) Oxygen is almost as heavy as air.

(b) Combustion and Rusting

The equation formed in Combustion is

Now heat the crucible along with magnesium and lid just opened for a while. Taking care that no ash comes out. Let it cool covering the lid and products formed weight it again. The weight now will be more. Let it be 50.82 gms, oxygen combined is 50.82 – 50 = 0.82 gms this shows that something is added to magnesium, which has increased its weight. This 0.82 gm is the weight of oxygen added to magnesium.
2Mg + O2 → 2MgO
Hence magnesium gains weight on burning.

(b) Candle gains weight on burning 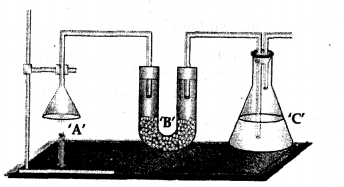 Conclusion: Candle gains weight due to mass of oxygen of the air which has combined with ‘carbon’ and ‘hydrogen’ of the candle [CxHy] producing . 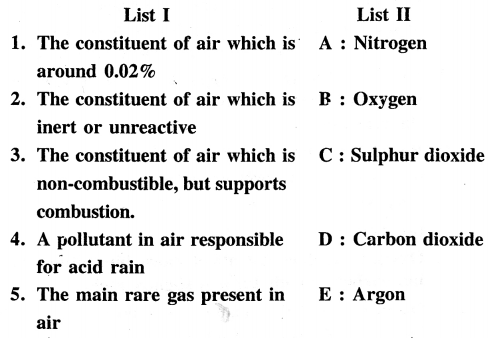 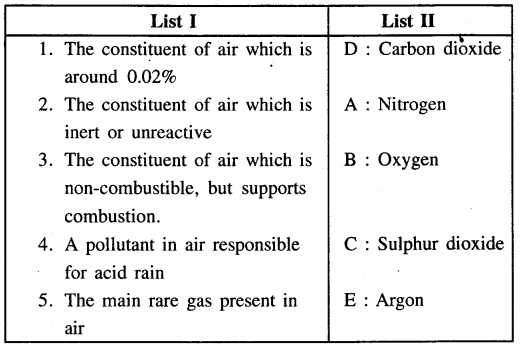 2. Give reasons for the following:

Question 2.
In the laboratory preparation of oxygen from potassium chlorate – manganese dioxide is added to the reactant.
Answer:
Because it alters the rate of the reaction – KC103 decomposes at a lower temperature.Catalyst itself undergoes no change –
(a) chemically (b) in mass.

4. Select the correct answer from the choice in bracket to complete each sentence.

5. Draw a neat labelled diagram for each of the following experiments.

Question 1.
To determine the component of air used up in burning, by using phosphorus and a bell jar.
Answer:

Question 2.
To study the presence of carbon dioxide in air.
Answer:

Question 3.
To prove that oxygen is non-combustible, but supports combustion.
Answer:

Question 4.
To prepare oxygen in the laboratory from hydrogen peroxide and a catalyst.
Answer: 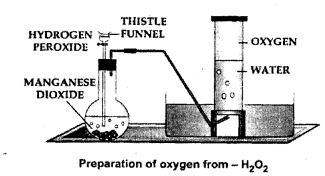 Question 5.
To demonstrate the burning of sulphur in a jar of oxygen.
Answer: 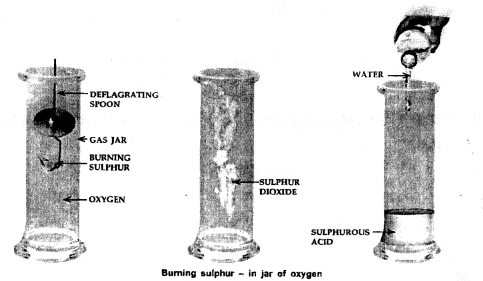