Question 1.
State what do you understand by the term ‘air’. Explain its importance to mankind.
Answer:
Air is a mixture whose composition varies at different intervals of time and different places of the world.
Man cannot survive without air and water and hence air is very essential for survival.

Question 2.
Give a brief account of the discovery of air and the scientists involved.
Answer:

Question 4.
Explain in brief the different layers of the atmosphere and the basic functions of the main layers.
Answer: 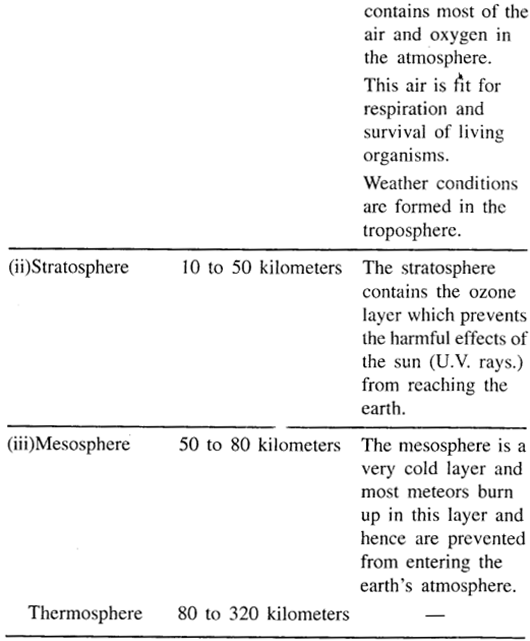 Question 5.
Describe a simple experiment with the help of a diagram to show that :

Observation : On tilting the tumbler, bubbles of air are seen coming out.
Water slowly enters the tumbler to take place of the trapped air in the tumbler.
Conclusion : Air occupies space (the space in the tumbler was occupied by air).

Observation : It is seen that the scale moves towards one side.
It moves on the side on which the inflated balloon was placed.
Conclusion : Air has mass.

Observation : On condensation of the steam the pressure inside the can reduces.
The air outside, exerts pressure on the can which crumples slowly.
Conclusion : Air exerts pressure.

Composition of air by volume : 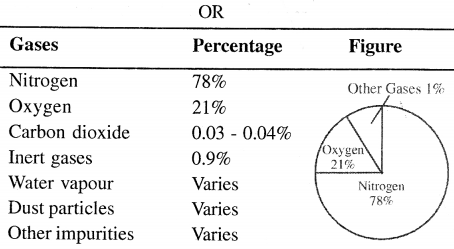 Air is a mixture whose composition varies at different intervals of time and different places of the world.

Observation : Dense white fumes of phosphorus pentoxide (P2O5) are formed when the phosphorus (P) burns in the active component of air (oxygen).

Question 8.
You are given a test tube with two outlets and a bottle of lime water. Using the same, how would you demonstrate experimentally the presence of carbon dioxide in air.
Answer:
Procedure :

Observation : The line water in the test tube turns milky.
Conclusion : Air which is sucked in from and ‘A’ contains carbon dioxide which turns the lime water milky. Hence, air contains – carbon dioxide.

Question 10.
Explain the importance of nitrogen of the air for plant growth.
Answer:
Nitrogen of air is converted to soluble nitrogenous compounds in the soil in the presence of air and moisture. These are absorbed by plants and converted to plant proteins.

Question 11.
Give a reason why nitrogen is filled in food packets and not oxygen.
Answer:
Nitrogen being inert or unreactive is filled into food packets to drive out the oxygen and reduce bacterial growth. The food package then stays well preserved.

Question 12.
State what would happen, if the air above the earth contained mainly oxygen and no nitrogen.
Answer:
Nitrogen is utilised by plants for their growth and development.
Free nitrogen of the air is converted to nitrogen compounds which are absorbed by the plants and converted to plant proteins. In the absence of nitrogen no plants will be survived on the earth.

Question 13.
State the utility of oxygen for respiration in

(a) living organisms
(b) plants.

Answer:
(a) Respiration in living organisms :
Respiration— It is a process whereby living things

(b) Respiration in plants : 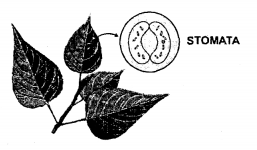 Combustion or burning, involves oxidation i.e. combination of substances like fuels with oxygen or air generally resulting in production of heat and light.

Carbon dioxide is released into the air as a result of all burning.

Hence oxygen in the air is renewed by photosynthesis and therefore the amount of oxygen in air does not get depleted or removed from air.
(b) Infrared (I.R.), visible rays and ultra violet (U.V.) rays are present in the earth’s surface.
The reflected U.V. rays from the earth’s surface pass through the carbon dioxide in the atmosphere, but the
I. R. rays are prevented by the carbon dioxide from being radiated out of the earth’s surface. This results in the earth’s environment staying warm.
The thick CO2 layer prevents the heat radiations from being radiated out which reason :
Reason : It results into rise in global temperature.

The rain serves as a natural source of water for plants and animals.

Question 18.
A mixture has a variable composition. Give three other reasons why air is considered a mixture and not a compound.
Answer:
Air is a mixture because :

Question 19.
State a reason why there is a balance in the amount of carbon dioxide in the air, even though carbon dioxide is released into the atmopshere by various processes.
Answer:
By the way of photosynthesis in plants which which occurs during daytime, carbon dioxide and water in the presence of sunlight and chlorophyll is changed into carbohydrates and oxygen is released out.

Hence, oxygen in the air is renewed by photosynthesis and therefore the amount of oxygen in air does hot get depleted or removed from air. 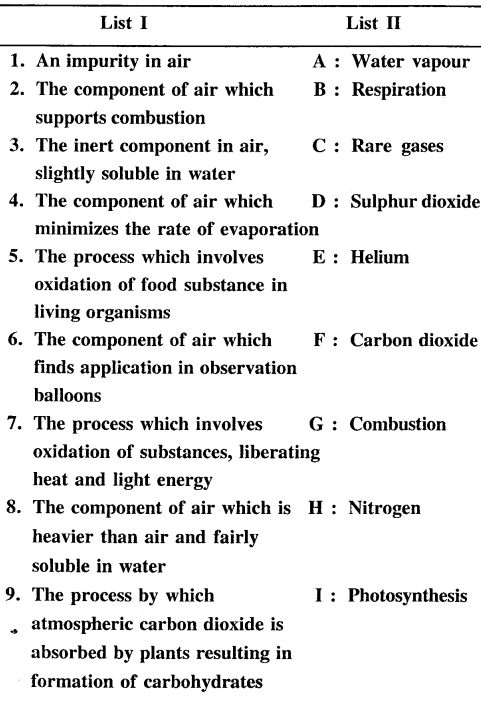 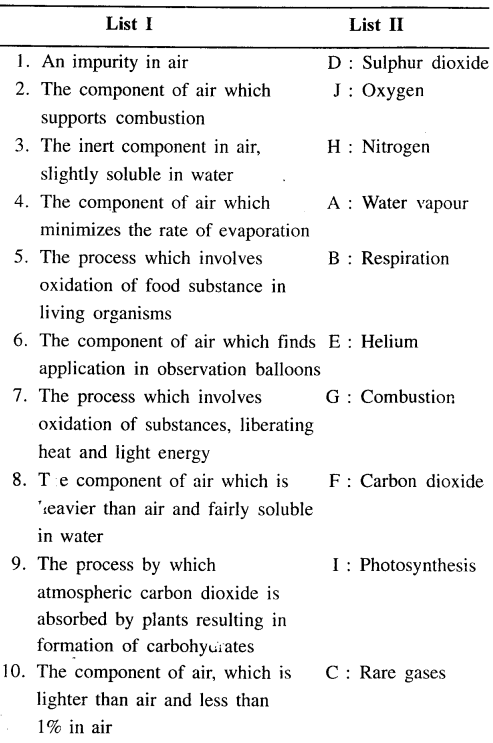 Q.2. The diagrams below represents an experiment to show the presence of a – component of air.

Question 1.
State why air is sucked from – outlet ‘B’ and not from outlet ‘A’.
Answer:
Because if we suck from ‘A’, lime water will be sucked out.

Question 2.
State why the air is sucked ‘slowly’ from the outlet ‘B’
Answer:
Because if air is sucked fast, lime water will also be sucked out.

Question 4.
State the reason for the above observation seen.
Answer:
The reason is the formation of CO2.

Question 5.
Name another component which if present in air as a pollutant – would have given a similar observation.
Answer:
Sulphur dioxide.

Q.3. Complete the statements given below by filling in the blanks with the correct word/s from the word/s in bracket.

Question 2.
The layer of atmosphere which contains the ozone layer.
Answer:
Stratosphere.

Question 3.
The active component of air which supports combustion and is used up in burning.
Answer:
Oxygen.

Question 6.
The type of bacteria which directly absorb nitrogen from the air and converted soluble nitrates in the soil.
Answer:
Symbiotic bacteria.

Question 7.
The product of respiration released in exhaled ajr, other than carbon dioxide.
Answer:
Water vapour and energy.

Question 8.
An inert gas which has a low boiling point and is used for producing very low temperatures.
Answer:
Helium.

Question 9.
A process which removes carbon dioxide from the air.
Answer:
Photosynthesis.

Question 10.
The component of air which does not support combustion.
Answer:
Nitrogen.

Q.5. State whether the following statements are ‘true’ or ‘false’. If false write the correct statement.

3. Carbon dioxide, water vapour and energy in the form of heat are evolved during respiration.
Ans. True.

4. Photosynthesis is a process by which green plants prepare their own food in the presence of sunlight and chlorophyll.
Ans. True.

Q.6. Give word equations for the following conversions.

Question 1.
Nitrogen of the air to nitric oxide.
Answer:

The nitric oxide reacts with oxygen to give nitrogen dioxide.

Question 5.
Carbon dioxide in air to carbohydrates in plants.
Answer:

Carbon dioxide and water in the presence of sunlight and chlorophyll is changed into carbohydrated and oxygen is released out.