II.Match the contents of Column A and Column B: 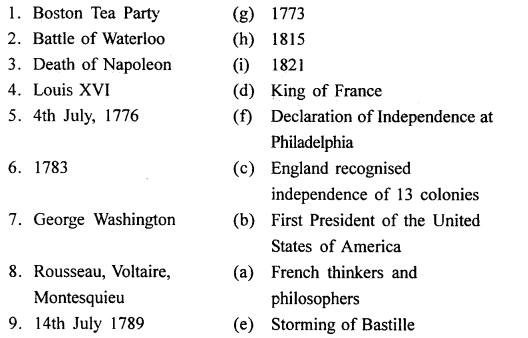 III. State whether the following statements are true or false:


Question 1.
What do you know about the Congress of Vienna?
Answer:
With the final defeat of Napoleon in the battle of Waterloo (1815) the European rulers met at Vienna to draw up a settlement for Europe. The Congress was hosted by the Austrian Chancellor, Duke Mettemich. The Congress of Vienna (1815) drew up the Treaty of Vienna in 1815 with the aim of undoing the changes ushered during the Napoleonic wars. All the kings that were ousted by Napoleon were given back their kingdoms. Austria, Russia, Prussia received many territories, so did Great Britain, Sweden and Holland. The Congress of Vienna redrew the map of Europe

Question 2.
What is nationalism? Discuss.
Answer:
Nationalism can be described as a strong feeling of love and loyalty which people have towards their own country. Nationalism arises when people share feelings and experiences. It may include common language, culture, religion, social order, historical tradition and physical descent. Patriotism is also a part of Nationalism.

Question 4.
Explain the significance of the American Revolution.
Answer:
The American Revolution is an important landmark in the History
of the World. It inspired the people of other colonies, including India, to overthrow their colonial masters and showed the path of democracy.

Question 5.
Why did the French Revolution take place?
Answer:
The French Society at that time was divided into three distinct classes or estates.The First Estate was made of the Clergy. The Second Estate was made up of the Nobility. The nobles were absolute landlords.The Third Estate consisted of the common people. They were the middle class members (merchants, lawyers, teachers, doctors, etc.) and the peasants and artisans. The first two Estates enjoyed all the luxury and privileges, owned all the land between them and paid no taxes. The Third Estate was heavily taxed and lived a life of hardship and misery. King Louis XVI was indifferent to the plight of the common people and lived a life of luxury himself.The common people of France were inspired by the revolutionary writings of famous french philosophers like Rousseau, Montesquieu and Voltaire. They attacked the church and the nobility in their writings. Rousseau wrote that subjects have the right to overthrow a king who does not rule according to the general will. The Philosophers propagated the ideas of liberty, fraternity and equality. The French people were also inspired by the American War of Independence. It made them ready to fight for their rights and justice.

Question 7.
Write a short note on Napoleon.
Answer:
In 1799 Napoleon overthrew the Directorate and framed a Consulate in France, which consisted of three Consuls (1799­1801). He himself was the First Consul and later he became Consul for life in 1802.
Napoleon defeated Austrians in Italy, defeated Britain in 1802. He established numerous small republics in Italy, Germany and Belgium. After these victories he became the Emperor of France and the Pope attended his Coronation Ceremony in 1804. He was at the height of his political and military glory between 1808-1810. He was finally defeated in 1815 in the Battle of Waterloo. He was exiled to St. Helena Island where he died in 1821.

Question 1.
The role of philosophers and thinkers of the 18th century.
Answer:
The common people of France were greatly inspired by the revolutionary writings of the famous French Philosophers like Rousseau, Montesquieu and Voltaire. They attacked the church and the nobility in their writings. Rousseau wrote that subjects have the right to overthrow a king who does not rule according to the general will. They propagated the ideas of liberty, fraternity and equality.

Question 2.
Storming of the Bastille
Answer:
On July 14, 1789, the people of Paris stormed the prison of Bastille. They freed all the prisoners.
Monarchy was overthrown. King Louis XVI and his queen Marie Antoinette were first imprisoned and later guillotined (Put to death) in 1793. There was chaos for some time and a reign of terror began which lasted from 1793-1794.Thousand of nobles, clergy and even innocent men were executed.In 1795 the National Assembly of France adopted a Declaration of the Rights of Man which declared that men are bom free and equal. A new Constitution was framed.

Question 3.
Boston Tea Party
Answer:
Anti British protests could be seen all over. The most prominent protest was the incident known as the ‘Boston Tea Party’. In 1773, a group of people raided British ships in the Boston harbour and threw 340 crates of tea into the sea. This was to protest against the new taxes which the British Government had imposed upon the colonies, especially the tax imposed on tea.

EXERCISES
Fill in the blanks:

D.State whether the following are true or false:


E. Answer the following questions in one or two words/ sentences:

Question 1.
Which particular incident sparked off the American War of independence? What is the importance of this event?
Answer:
The American War of Independence, was sparked off by an incident known as the Boston Tea Party.
In 1773, a group of colonists, disguised as Red Indians, raided British ships in Boston harbour and threw 340 crates of tea into the sea. This incident was a protest against the new taxes including a tax on tea, imposed on the colonies .The importance of this act was that it was an act of open defiance of the colonists against British authority.

Question 3.
What is the significance of the 4th of July in American history?
Answer:
The 4th July is celebrated as the American Independence Day.

Question 4.
Mention two characteristic features of the French monarchy.
Answer:
The French king was an autocrat. He enjoyed absolute powers and his will was law. There was no check on his powers by any parliament. He ruled by Divine Right and was answerable to God and not to the people.

Question 5.
In what way did the American Revolution influence the Indian Constitution?
Answer:
The Constitution of the United States of America has served as a model and an inspiration to several countries including India. The framers of the Indian Constitution adopted various features like the federal form of government, the incorporation of Fundamental Rights like the American Bill of Rights and the system of checks and balances.

Question 6.
Why is the French Revolution of 1789 considered a turning point in human history?
Answer:
The French Revolution of 1789 was a milestone and a major turning point in human history. It revolutionized the social, economic and political fabric, not only of France but of all Europe and subsequently of almost the entire world.

Question 7.
Mention the role of the political philosophers in the overthrow of the French monarchy.
Answer:
The revolutionary writings and ideals of great political philosophers like Voltaire, Rousseau and Montesquieu created an intellectual ferment in France. The middle class was greatly inspired by the revolutionary ideas. Through their writings, the philosophers exposed the evils of French society and government and inspired the people to revolt and fight for their rights.

(c) The American colonists refused to pay taxes as they argued that the British Parliament had no right to tax the colonists since they had no representatives in the Parliament.In 1773, a group of colonists, disguised as Red Indians, raided British ships in Boston harbour and threw 340 crates of tea into the sea. This incident was a protest against the new taxes including a tax on tea, imposed on the colonies.The importance of this act was that it was an act of open defiance of the colonists against British authority.

Question 2.
The British monarch, King George III, refused to withdraw the unjust and oppressive Acts imposed on the colonists and declared war on them. In this context discuss:
(a) The revolutionary principles and ideas in the Declaration of Independence of 1776
(b) The terms and long-term impact of the Treaty of Paris
(C) The important features of the newly established United States of America
Answer:
(a) The Declaration of Independence, 1776 clearly stated that the American colonists had the right to free themselves from the oppressive and explorative British government and form their own government. This declaration proclaimed that all men are bom equal and are endowed with certain rights such as the right to life and liberty and the pursuit of happiness.

(b) According to the Treaty of Paris signed in 1783 between the British government and the colonists, British government recognized the independence of the thirteen colonies which came to be known as the United States of America.

(c) Features of the newly established United States of America are as:

Question 3.
The French Revolution of 1789 was a milestone and a major turning point in human history. In this context discuss the.
following causes
(a) An unjust, unequal social order of the Ancien Regime
(b) The growing power of the middle class
(c) An inefficient, corrupt administration
Answer:
(a) An unequal, unjust social order: French society was essentially feudal in nature.
It was divided into three main classes, called Estates:

The First and Second Estates enjoyed numerous privileges. They owned practically all the land in France but did not have to pay any taxes. They were very wealthy and led comfortable and luxurious lives.The Third Estate, on the other hand, shouldered the entire burden of taxation but was not entitled to any of the privileges enjoyed by the clergy and the nobles. Taxes were imposed on everything, including basic necessities like salt. Life was very hard, especially for the poor peasants who had to pay additional taxes to their feudal lords.

(b) Middle class had acquired great wealth and become economically powerful in the 18th century. However, they were denied of social equality and political rights. This caused great resentment among them. They used their economic power to overthrow the Ancien Regime.

(c) The administration was corrupt and inefficient. The officials were selfish and unconcerned about the welfare of the people.King Louis XVI was pleasure-loving and extravagant. He was completely ignorant of and indifferent to the sufferings of the common people and was greatly influenced by his beautiful and ambitious wife, Marie Antoinette. Together they squandered money on festivities and pleasures and emptied the royal treasury.

(b)
The revolutionary ideas of the French Revolution spread to all European countries. The slogans of Liberty, Equality and Fraternity become the guiding principles all over the world. Oppressed people in Europe rose in revolt against their tyrannical, hereditary rulers and established new social and political system. It inspired the spirit of nationalism among people.
(c)
The Revolutionary principles of Liberty, Equality and Fraternity had an impact on India as well. Indian nationalists imbibed these principles and developed a democratic and nationalist outlook. A National movement for freedom was launched, culminating in India’s independence from British rule in 1947.

This picture depicts a very important event in world history where in a great mob is shown attacking a state prison. 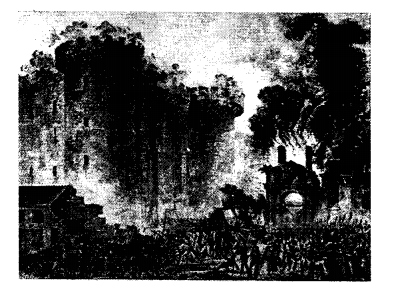 Question 1.
Name the event.
Answer:
On 14 July 1789, a great mob attacked Bastille the state prison for political prisoners and a much hated symbol of the Ancien Regime. The prisoners were released and they joined the revolutionaries.

Question 3.
What is the significance of this event?
Answer:
The Prisoners were released and joined the revolutionaries. It also symbolized the Victory of people of France and the fall of monarchy.

Question 4.
Give a brief account of the developments that followed this event.
Answer:
This incident marked the beginning of the revolutions. The newly formed National Assembly consisting of the representatives of the Third Estate, took over the Control of the affairs of France. It adopted the famous Declaration of Rights of Man and Citizens- a landmark in the history of human progress. By 1791, a new constitution was drawn up for France.