II. Match the contents of Column A and Column B: 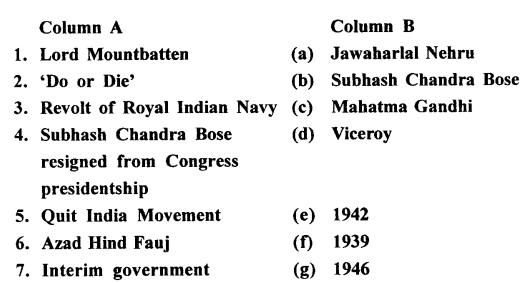 III. State whether the following statements are True or False:

Question 1.
Discuss the main aspects of the Non-Cooperation Movement.
Answer:
The growing antagonism of the Indians towards the British led to Khilafat and Non-Cooperation Movement. Gandhiji looked upon the Khilafat agitation as an opportunity of uniting Hindus and Muslims as would not arise in a hundred years. The Non­cooperation Movement was named so because it decided not to cooperate with the Government by renunication of titles, boycott of legislature, resigning from government jobs, lawyers leaving courts, students leaving British schools and colleges, boycott of British Goods and other activities. People refused to pay taxes, no longer recognising government as legitimate.

Question 2.
How and when did the Civil Disobedience Movement start? How did the government suppress it?
Answer:
Civil Disobedience Movement was started on 12 March, 1930 when Gandhiji marched from his Sabarmati Ashram in Gujarat to Dandi (375 km from Ahmedabad). He carried on this march with 78 followers to break the Salt Law. He defied this law by picking up a handful of Salt formed by the evaporation of Sea water.

This gave a start to the Civil Disobedience movement all over the country. Women also participated in this movement. It spread as far as N.W. Frontier province where it was led by Khan Abdul Ghaffar Khan who is popularly known as the Frontier Gandhi. The Government tried to suppress it with a stem hand. The British declared the congress illegal. There was uprising all over the country followed by refusal to pay Chaukidari Tax and defiance of forest law. Lakhs of Indians offered Satyagraha. Foreign goods were boycotted and peasants refused to pay

Question 3.
Why did the Congress pass the Quit India Resolution? How did the government react to it?
Answer:
The All India Congress Committe met at Bombay on August 8, 1942 and passed the Quit India Resolution. After the Cripps Mission failed, this great Mass struggle for Independence was launched by the Congress. It was the greatest mass challenge to the British authority. It shook the foundations of the British Rule.

Gandhiji declared, “I therefore want freedom immediately, this very night before dawn if it can be had.” He also gave a mantra ‘Do or Die”. He said ‘We shall either free India or die in the attempt.’

The movement was the greatest mass challenge to the British authority. It shook the foundations of the British rule in India and showed the British that the masses had immense capacity to suffer and die for the cause of freedom. The government soon arrested all leaders and declared Congress illegal. The government resorted to stem measures to suppress the movement.

Question 4.
Discuss the main features of the Government of India Act, 1935.
Answer:
The Act provided for the establishment of an All India Federation. There was to be a bicameral federal Legislature.

Question 5.
Why did India accept the partition proposal even though it did not accept the two-nation theory?
Answer:
Lord Mountbatten came to India in March 1947 as the new viceroy. He presented a plan for the division of India into two independent states India and Pakistan. In 1946 there had been communal riots in Bihar, Bengal and many other places. When partition was announced, more riots took place especially in Punjab. Thousands of people were killed and many more were rendered homeless.
The Congress agreed to the plan of partition not because of any faith in the two nation theory but because it felt that there was no other way to achieve freedom and prevent and destruction.

Question 6.
Discuss the contribution of INA in the freedom struggle.
Answer:
The Indian National Army was formed with a aim to get freedom from British rule. It comprised Indian prisoners of war. Subhash Chandra Bose became the Supreme Commander of the INA. He gave slogan’ Dilli Chalo’ and ‘Jai Hind’. In 1943 Netaji proclaimed the formation of Azad Hind Fauj in Singapore. He proceeded to the Andaman and Nicobar Islands which the Japanese had taken ‘ from the British and hoisted India’s flag there. He then conquered Imphal and Kohima.But the victory was short lived. Britain reestablished control over Burma. The INA was defeated. Japan surrendered after the atom bomb attacks.

V. Picture study : Look at the picture given below. 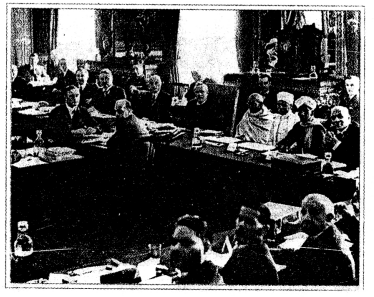 EXERCISES
A. Fill in the blanks:

Question 1.
What technique of resistance did Gandhji evolve in South Africa? What was its basic principle ?
Answer:
Gandhiji became the leader of a struggle against racial injustice in South Africa. During the struggle, he evolved a technique known as satyagraha which was later applied to the Indian National Movement.

Question 2.
Why did Gandhiji lead campaigns in
(a) Champaran (b) Kheda ?
Answer:
(a)
Champaran — Gandhiji championed the cause of the tenant farmers of Champaran district against the oppression of the British indigo planters. The movement was a success and the peasants received compensation.
(b)
Kheda — Gandhiji advised and convinced the cultivators of Kheda district to stop paying land revenue to the government because the crops had failed. The peasant’s demand for remission of land tax was accepted by the government.

Question 4.
Under whose leadership was the Lahore session of the Congress held in 1929? What resolution was passed in this session?
Answer:
In December 1929, the Indian National Congress met in Lahore under the youthful and dynamic leadership of Jawaharlal Nehru.
The Congress passed a resolution declaring ‘Pooma Swaraj’ or ‘Complete Independence’ as its goal. 26 January 1930 was fixed as ‘Independence Day’.

Question 1.
With reference to Gandhiji, discuss his views on the following:
(a) Truth and non-violence
(b) Hindu-Muslim unity
(c) Social justice
Answer:
(a) Satyagraha is a combination of two Sanskrit words-satya (truth) and agraha (eagerness). Satyagraha is based on the twin principles of truth and non-violence. A satyagrahi was one who firmly believed in truth and non­violence and who would resist evil at all costs. A satyagrahi was peaceful, fearless and strong. He/She would have evil but not the ‘evil doer’. In the fight for justice and truth, the satyagrahi would willingly accept suffering and be ready to make sacrifices.

The suffering and patience of the satyagrahi was expected to bring about a change of heart in the enemy. The idea behind satyagraha was not to destroy the enemy but the transform and enlighten him.

Gandhiji insisted on non-violent methods of struggle. He believed that non-violence was the weapon of the strong and could be effectively used to resist armed attacks by the enemy. A satyagrahi was expected to follow peaceful methods even under extreme provocation.

(c) Gandhiji was a great believer in social justice. He championed the cause of the poor and the downtrodden, the emancipation of women and improvement of the conditions of the lower caste ‘untouchables’ whom he called ‘Harijans’, e., children of God. He worked tirelessly to remove prejudices and change the mindest of the people. He believed that political freedom was meaningless without social reforms.

Question 2.
In the context of the Jalliamvala Bagh tragedy, answer the following:
(a) Why was a public meeting held in Jallianwala Bagh on 13 April 1919?
(b) Why did the troops open fire on the gathering? What happened as a result of the shooting?
(c) How’ did the entire nation and Gandhiji react to the events in Amritsar?
Answer:
(a) The British government adopted the policy of repression to crush the anti-British movement against the repressive Rowlatt Act passed by the government in 1919. In some places, particularly in Punjab, the hartals led to violence. Two popular nationalist leaders were arrested in Amritsar. To protest against the arrest of their leaders, a public meeting was held on 13 April 1919 in an enclosed space known as Jallianwala Bagh. General Dyer surrounded the Bagh with his troops, blocked the only exit and ordered the troops to open fire on the peaceful gathering in the Bagh.

(b) The people were unarmed and peaceful. Unfortunately, they were not aware of the fact that the military commander of Amritsar, General Dyer, had issued an order banning all public meetings. General Dyer surrounded the Bagh with his troops, blocked the only exit and ordered the troops to open fire on the peaceful gathering in the Bagh. The shooting continued till there was no ammunition left. Nearly 400 people were killed and over 1,000 were injured.

(c) Martial law was proclaimed in Punjab. During this period, people were humiliated and tortured. The brutality of the Jallianwala Bagh massacre and the humiliation and inhuman treatment of the Indians that followed shocked the entire nation. Gandhiji was horrified. He lost all faith in the goodness of the British government and declared that it would be a ‘sin’ to cooperate with the ‘Satanic’ government.

(b) Early in 1922, a procession of peasants were fired upon by the police at Chauri-Chaura a village in U.P. The people reacted violently and burnt down the Chauri-Chaura police station. Twenty-two policemen were killed. Gandhiji immediately called off the movement.

(c) The Non-cooperation Movement was a significant phase of the Indian struggle for freedom from British Rule. This movement which lasted from 1920 to 1922 was led by Mohandas Gandhi and supported by the Indian National Congress. It aimed to resist British occupation of India through non-violent means. Protestors would refuse to buy British goods, adopt the use of local handicrafts and try to uphold the values of Indian honour and integrity. The Gandhian ideals of ahimsa or non-violence, and his ability to rally hundreds of thousands of common citizens toward the cause of Indian Independence, were first seen on a large scale in this movement.

Question 4.
In the context of the Civil Disobedience Movement, answer the following:
(a) Give an account of the Salt Satyagraha.
(b) How did the government react to the movement?
(c) What impact did the Civil Disobedience Movement (1930-34) have on the nation?
Answer:
(a) The Salt Satyagraha began with the historic Dandi March.Gandhiji set out from Sabarmati Ashram with 78 followers, on a 385-km journey to the coastal village of Dandi. Thousands of people joined him on the way. On his arrival in Dandi, he picked up a handful of salt from the beach. This act symbolized defiance of the salt law. It was a signal for every Indian to violate the salt law. Throughout India, people began to manufacture salt and sell it openly,

(b) The goverment suppressed the movement with force and brutality, Gandhiji, Nehru and all other important leaders were arrested. Hundreds of people were injured or killed in lathi charges and police firing. Over 90,000 people were imprisoned. 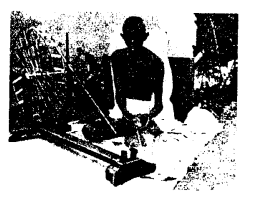 3.What are the principles on which his method is based?
Ans. Gandhiji Method of Struggle ‘Satyagraha’ is a combination of two Sanskrit words: satya (truth) and agraha (eagerness). It is based on the twin principles of truth and non-violence. The suffering and patience of the satyagrahi was expected to bring about a change of heart in the enemy. The idea behind satyagraha was not to destroy the enemy but to transform and enlighten him.

4.Why is he called the leader of the masses?
Ans. Gandhiji had immense faith in the capacity of the common people to struggle against oppression. Under his leadership, the Indian national movement was transformed into a mass movement.

5.Mention the features of his non-violent struggle against the British.
Ans.