II. Match Column A with Column B:

Question 2.
What policy did Bimbisara follow to extend his territories?
Answer:
Bimbisara extended his territories through conquests and marriages. He married the daughter of the king of Kosala and received the province of Kashi as dowry. The ruler of Kosala
thus became his friend. He also married the Lichchavi princess of Vaishali and thereby extended his friendship ties in this region. His third wife was the daughter of a chieftain of Punjab. Infact, Bimbisara was the first Indian king who brought a large part of Northern India under a unified political control.

V. Give reasons why

A. Fill in blanks.

Question 3.
How did the conquest of Anga benefit Magadha?
Answer:
The conquest of Anga brought the river port of Champa under his control of Magadha. The rich deposits of iron or found in this region contributed to the development of a strong and stable economy for Magadha.

Question 4.
Why was Alexander unable to conquer Magadha?
Answer:
Alexander was unable to Conquer Magadha because his army refused to advance any further. The army was war-weary and homesick and was not willing to face the powerful army of Magadha.

D. State whether the following are true of false.

F. Picture study.
This is a painting of two important kings who became friends after war. 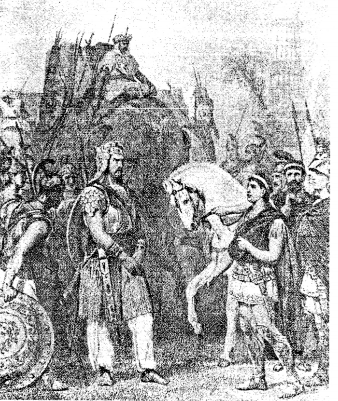 Question 2.
Give an account of the earlier developments that led to this event.
Answer:
Porus was the ruler of the area lying between the rivers Jhelum and Chenab. Ambhi offered to help Alexander to defeat Porus. Porus fought heroically but was defeated. Fie was captured and brought before Alexandar who asked him how he would like to be treated. Porus replied ‘As one king should treat another king’ Alexandar was so impressed with reply that he set Pours free and they became friends.