Foods that Start with U: We all consume various new food items every day from all across the world. Do you happen to remember the name of all the foods that you have tried? In this writing, we added a list of food items that start with the letter u and are consumed daily. We have also included interesting facts about these food items, which will make learning more fun.

Name of Foods Whose Names Start With U

List of Food Names With Letter U At The Start

Fascinating Facts On Foods That Start With U

This is a hybrid fruit, crossbred between oranges, grapefruit and tangerine. Ugli has a fragrant rine, and its flesh is very juicy, containing 2% iron, 8% dietary fibre and 70% vitamin C. It tastes less bitter than grapefruit but sourer than orange.

Udon is a staple Japanese cuisine. It is the comfort food for many Japanese people. It is a type of noodle, chewy, thick, made with wheat flour. It can be served as stir-fry or in broth. It can be enjoyed both hot or cold. Udon is sometimes also used in place of ramen as it contains less MSG and less sodium.

Ugni fruit grows on medium-sized trees which are native to Chile, Argentina and Mexico. The fruits have purple and red colours. Ugli fruit is usually not eaten fresh but first processed and made into jellies, jams, desserts and piquant drinks.

Also known as Okoy, this dish was originated in the Philippines. It is the Filipino version of the shrimp fritters. It is served warm as either the main course or a side dish. These are crispy deep-fried fitters made with unshelled shrimp, glutinous rice batter and different vegetables.

These fruit colours are reddish or yellow with a sweet taste. They are edible and pretty tasty, generally eaten raw, cooked or preserved. They are similar to custard-apples of South and Central America and Australia. These heart-shaped fruits are covered with bumps that almost look like scales.

Also known as Vushka, these are small dumplings that are filled with flavoursome minced meat, sauteed onions, and wild forest mushrooms. They are also known as ‘little ears’ due to their shape and are one of the three main Polish dumplings.

Also known as the Brazil plum, these citrus fruits can be either eaten fresh or made into jams and juices. They are native to northeast Brazil. These fruits have a smooth peel that ranges in colour from yellow to green when the fruit is ripe. The fruit is flavourful and juicy.

Unagi is the Japanese phrase for freshwater eel. It is a common ingredient in Japanese dishes. Unagi is extraordinarily nutritious and packed with vitamin A, protein and calcium. When cooked properly, eel must be fluffy, soft and flaky pleasant on one’s palate without any fishy or earthy aftertaste.

These fruits are found mainly in mangroves from the Indian Subcontinent to East Africa. The fruits are eaten raw, and they taste somewhat like quince. In India, these fruits are also cooked and used as vegetables.

Upma is a dish that was originated in the Indian subcontinent. It is the breakfast food for many parts of the country and is cooked a thick porridge from coarse rice flour or dry-roasted semolina. Different vegetables and seasonings are often added during cooking. 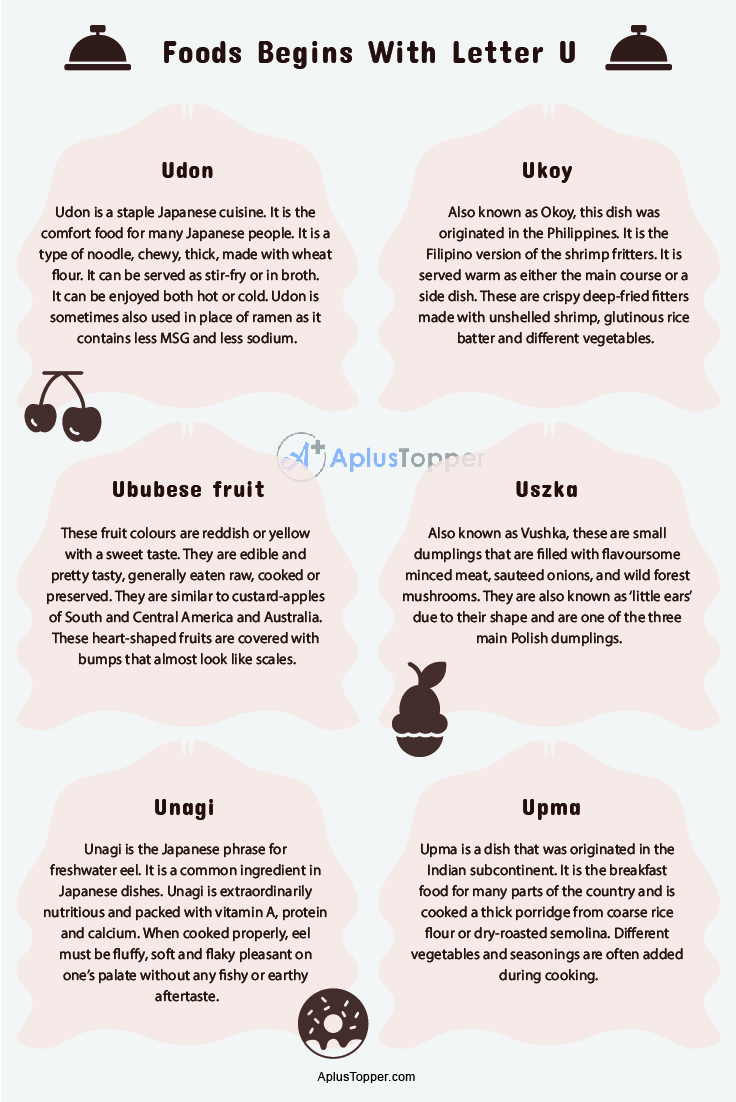 These fruits are small red-orange fruits which are finely haired and has a pleasant taste resembling peanut butter. This fruit is also known as the peanut butter fruit, and the fruit comes from a large evergreen shrub that is native to Ecuador and Peru.

These root crops are uniquely coloured root crops and a variety of purple yams. It originated in the Philippines and had a mildly sweet flavour accompanied by the hint of vanilla, making it the perfect dessert. It is used for creating tasty treats such as ice cream, cookies, pancakes, cupcakes, doughnuts and many more.

These are sour fruits that turn green to yellow when they mature. Umbrella fruits taste like mango and pineapple. They have a hard, crunchy flesh that is our and therefore, it is often eaten with salt, sugar, chilli powder or shrimp paste.

This is a type of dosa from the southern part of India. Unlike a usual dosa, which is crisp and crepe, uthappam is thicker and has toppings. The main ingredients used for making uthappam are urad dal and rice flour. The toppings used are onions, tomatoes, capsicum, chillies and coriander.

It is an African herb which is used for its bitter taste it imparts in stews and soups. The leaves are either dark green or pale and shiny when fresh. The leaves become dark green when frozen. It is also used as spices and vegetables for garnishing some local delicacies.

It is a product of alkaline fermentation of oil bean seeds. It is prevalent among ethnic groups of Nigeria and lbos. The product serves both as a food flavouring agent and a delicacy. Ugba is very rich in protein.

Cow udders used to be traditionally consumed even though they were very recently being explored as a viable edible option in today’s world. Depending on their preparation, the texture will range from fatty like a well-marbled steak and chewy like calamari. It can also be thinly sliced and cured to be fried.

Also known as okazi or afang leaves, these leaves are glossy green leaves. They are the main ingredient in a well-known Nigerian soup known as afang soup. They have an extremely tough texture and bitter flavour.

These are Russian heirloom varieties of tomatoes, known for their pink colour and distinctive heart shape. It is an oxheart, a variety tending to be meaty, large tomatoes with a few seeds, making them ideal for slicing. They have a nice balance of sweetness related to acidity.

This is a very common root vegetable that is grown in South America. They are second in popularity to potatoes. These tubers are lumpy and roughly round with a waxy skin which can be a range of purples, pinks or even yellow. They are frequently used in soups and stews.

These are the organs of animals, generally deer. These involve the bits that are eaten regularly as delicacies – like kidneys and livers – as well as the rest of the organs that are edible but not generally consumed – like lungs and heart.

It is also known as the Japanese plum, which it looks similar to (even though more closely related to apricots). They are the size of a plum, having smooth green skin, which is green when young and matures into yellow, sometimes having a pink blush. They are pretty sour and aren’t commonly eaten raw from the tree.

It is also known as sea grapes as it is a unique type of sea algae resembling tiny, translucent pale green grapes. They grow on edible stems, and the entire underwater plant is edible. They are a good source of vitamin A and C, zinc, calcium, iron and minerals.

Uni or sea urchins are spiny, round sea creatures which live along the seafloor along with rocks and corals. The edible portion of uni is the gonads, sometimes known as a row. They are prepared in many variations depending on they are served.

These are very small black beans having a small yellow stripe along one side. They have pale-yellow flesh, and they can be prepared like other dried beans. They are popular in Indian cuisines used for making dal. They are also fermented for making into dumplings or convert into flour for making pancakes.

Urchin of the Woods Mushroom

Also known as hedgehog mushrooms, the urchin of the woods has a pale yellow or off-white uneven cap with spines that grow underneath instead of gills. They are considered as a gourmet mushroom that has a very pleasing crunchy texture and nutty sweetness. They might be slightly bitter when eaten raw.

These are a botanical term for a juicy or pulpy fruit which has a thin skin containing multiple seeds. It is most widely used for referring to grapes. 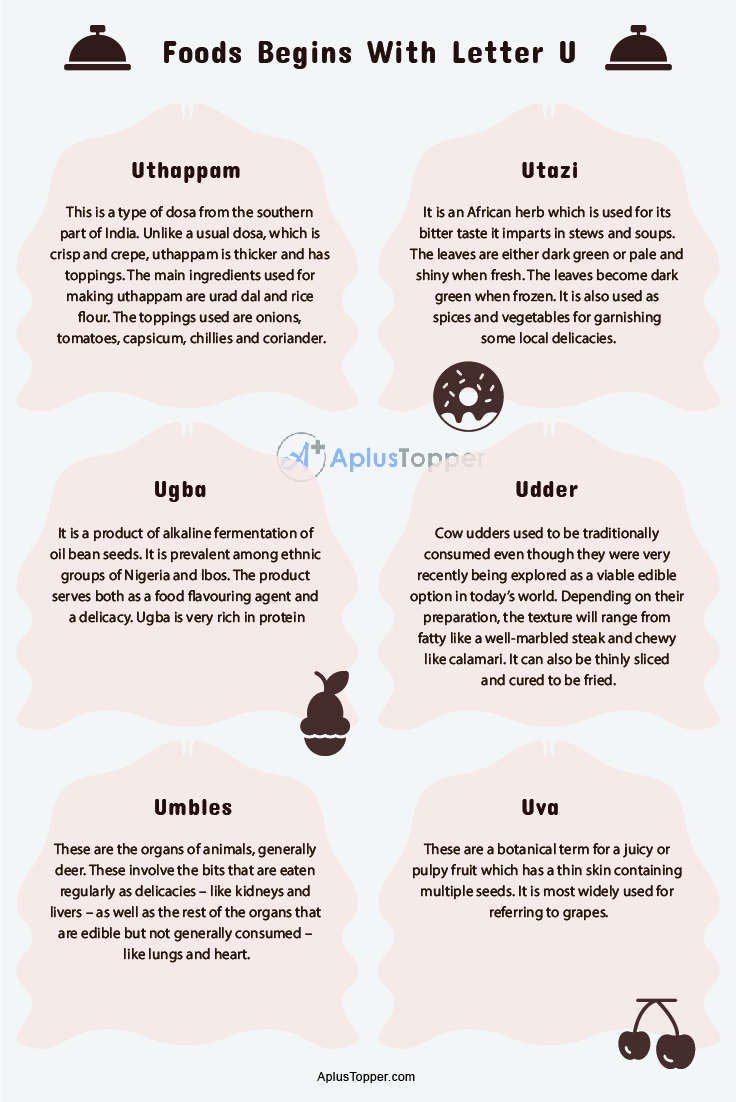