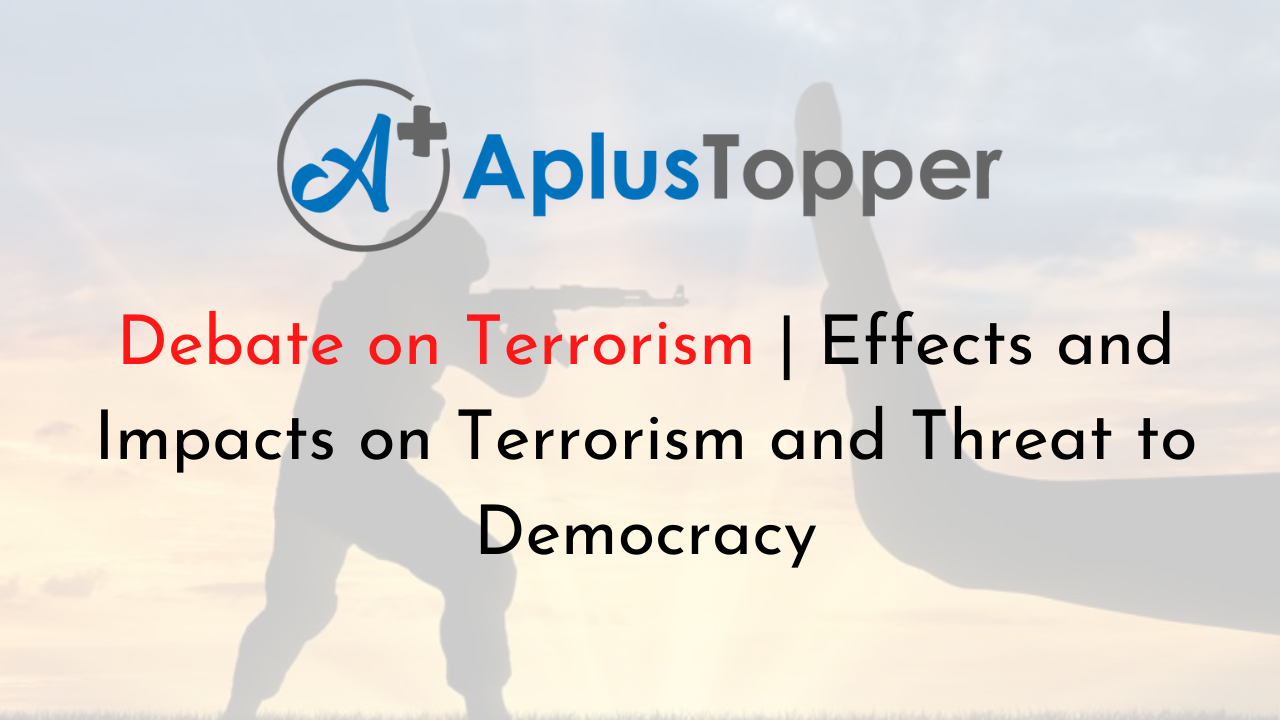 Today, I _________is here to convey my thoughts on one of the most widely discussed topics which is ‘Terrorism’. We all are aware of this term and I am going to speak about the ill effects of terrorism on different communities across the world. I am grateful for allowing me to express my views in front of such a large, knowledgeable audience.

My dear friends, today we are quite aware of the term ‘Terrorism’ but what do we mean by this word? It has a close connection with ‘Terror’ which is not a very pleasant thing to hear or feel about. It is very difficult to define terrorism but all we can say is that it is related to such motives, targets or methods which aim at creating terror among people.

In the debate on terrorism, we first need to analyze the fact why terrorism prevails in the world or who are those who encourage it. Truly speaking, the reasons vary in different situations and different parts of the world. But it has been observed that when a group or community of people feel deprived of some rights or privileges which they think they deserve, they try to show their protests by organizing certain violent activities of killing and destruction which creates terror. It can be said that the motive behind such acts of terrorism is to create fear among people and negatively gain some sort of importance. Sometimes they target a particular community or religion to burst out their frustrations and enjoy harassing people.

The objective of terrorism is nothing but to draw the attention of concerned authority towards their demands. But my dear friends, who are present in this debate on terrorism, tell me honestly; is it the proper way of dealing a problem? Is it justified to show dissatisfaction through violent acts which destroy life and property? I know that no sensible person will support such a violent and unethical method of war against the concerned authority or administration, to get a problem addressed.

Most of the countries in the world are facing the ill effects of terrorism in some way or another. Some of the government has successfully handled terrorism in their country but a many of those are still struggling to control terrorism in a fruitful way. In this debate on terrorism, we can’t ignore the fact that there is a vast network widely spread across the borders which promotes terrorism involving people who try to gain some sort of benefits out of it. It is really surprising that some countries even favor terrorism as a means of addressing sensitive issues, which can be sorted out through peaceful discussion and agreement.

The people engaged in direct terrorism are criminal offenders with very cruel mindsets. They find pleasure in inflicting pain on others and console themselves that they have been successful in teaching their enemies a good lesson. This is really absurd. People can find a solution to their problems by means of peaceful protest, meaningful discussions, or compromise and benefit themselves. Instead, they are following the path of violence. The debate on terrorism must highlight the reality that terrorism is not the answer, but arises lot many questions.

Terrorism is ruining innocent lives, families, societies, and nations. So why is terrorism? It’s a debate on terrorism so my worthy opponent may forward his opinion that some solutions do come through violent means when peaceful means are found ineffective. But I strongly oppose this idea. I agree that there are issues that remain unaddressed for a long time and make people impatient. But it doesn’t allow anybody to form a group and spread terrorism across societies causing harm to people. Please keep in mind that people in general never accept terrorism. So terrorism doesn’t get support from the common masses except for those few selfish leaders who provoke people towards the path of violence and destruction.

Those who are present in this debate on terrorism must appreciate the fact that terrorism doesn’t start all of a sudden. There may be certain instances of terrorism started by instigating religious or communal sentiments, but the effect was not so devastating or long-term. Most of the terrorism acts are well planned by sharing lots of information and coordination among like-minded people across countries. To organize large-scale terrorism activities, lots of funds and resources are required which are provided by terrorist groups of different parts of the world.

If we go deep into this issue in the debate on terrorism, we will realize that there is a business angle to it, involving lots of money and power. Certain groups in a few countries are making money by supplying arms and ammunition to terrorist groups. So they are in favor of terrorism and promote it to flourish. These terrorist groups mostly target young generations and mold their sensitive minds towards terrorist acts with the promise of giving them a better future.

This century has witnessed lots of blood-bath and destruction by these acts of terrorism, ruining nations and the economy. The debate on terrorism must raise the question, why terrorism is required? Why is it necessary to become violent and harm people? Terrorism is not a pleasant state of affairs. It costs many lives, destroys property, ruins families and generations just for the satisfaction of ego.

The feeling of hatred and lack of empathy is pushing us towards the end of this world very fast. There are a lot many things to take care about, the health, natural resources and spreading of humanity. But by planning and fighting a pseudo war against the government and administration, terrorists are wasting lots of valuable energy and ideas. If such people use their minds in some constructive way instead of thinking ill of others and finding ways to harm others, they surely bring benefit to them as well to the society at large. Let’s hope for a better world free of terror and fear for future generations to come. 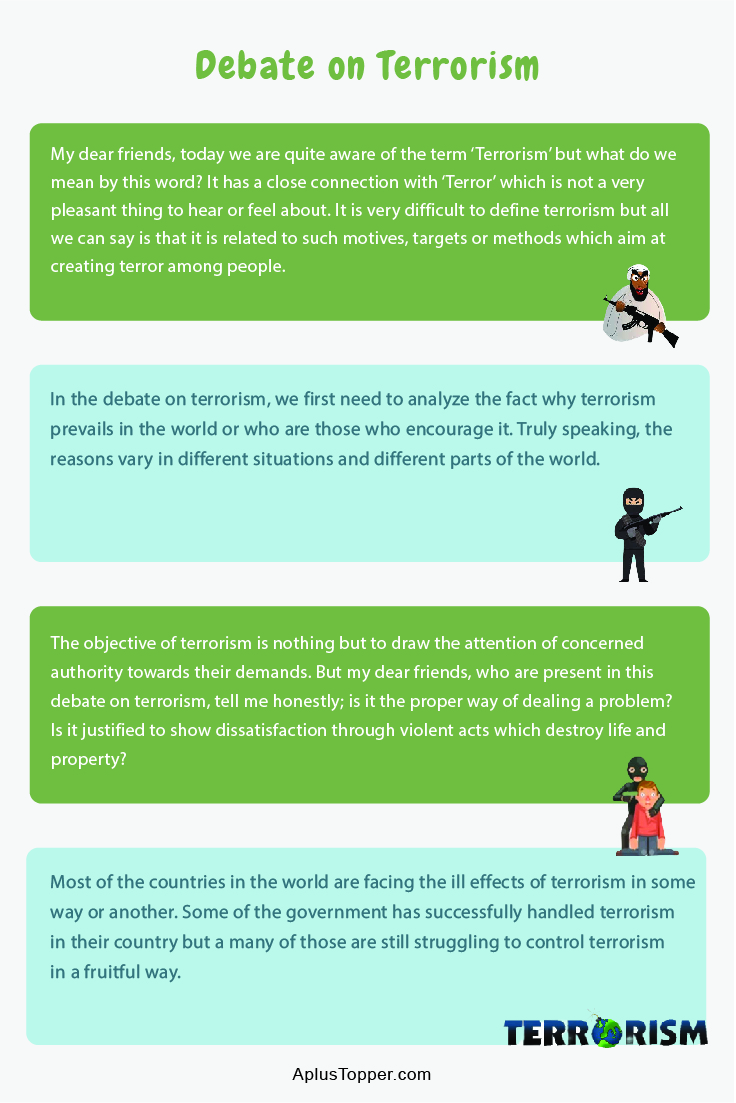 FAQ’s on Debate on Terrorism

Question 1.
What are the effects of terrorism on the economy of a country?

Question 2.
What are the negative impacts of terrorism on the tourism industry of our country?

Answer:
In some areas like Kashmir valley which is a famous tourist location, terrorist activities reduced the number of tourist arrivals drastically and affected the tourism industry.

Question 3.
Does social media have any role to play in terrorism?

Answer:
Some terrorist groups are reported to use social media and internet platforms to spread their messages and gather information.

Question 4.
Which is the counter-terrorism wing of the Indian government?

Answer:
National Investigation Agency (NIA) is the central body of the Government of India which enforces counter-terrorism law.

Question 5.
What is the famous 9/11 incident of terrorism?

Answer:
Terrorists hijacked commercial planes on September 11, 2001, and crashed two of them into the twin towers of the World Trade Center in New York City.