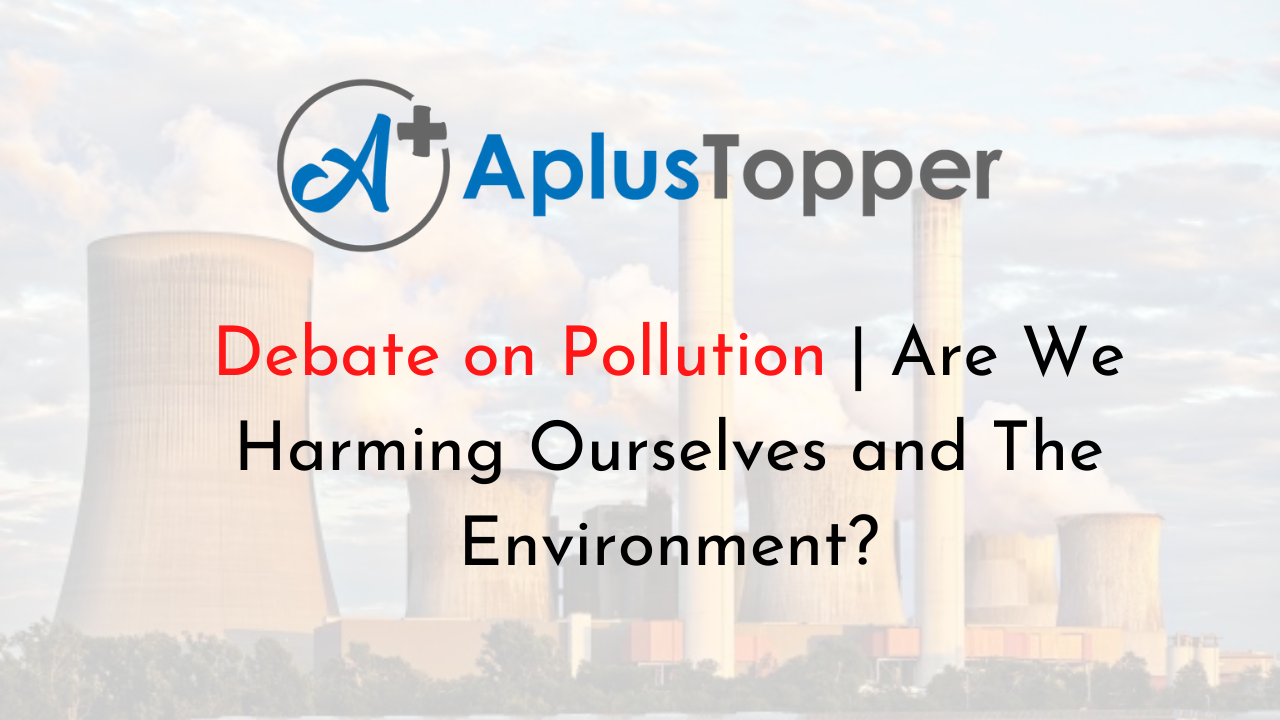 Debate on Pollution: Pollution is the introduction of contaminants into the natural environment that cause adverse changes to the environment. Pollution can take the form of chemical substances or energy, such as noise, heat, or light. Pollutants or the components of pollution can be either foreign substances/energies or naturally occurring contaminants. According to research conducted it was discovered that more than 9 million are killed to date due to the ever-increasing pollution.

The Covid pandemic has taught us numerous things yet quite possibly the main thing that it has caused us to acknowledge is that how unreliably we have overexploited nature that nature itself needs to begin healing so the Earth begins to heal. A number of environmentalists have shared that the Covid pandemic, the insect swarms’ assault, the Australian forest fires, and a lot more deadly occasions that we have seen in 2020 are only the start of the impacts of climate change and global warming.

I’m in complete agreement with the statement that pollution is a significant reason for worry for the environment and humans. Below is a debate on Pollution, I will share a couple of reasons to help my opinion on the harmful effects of pollution. Pollution can also cause headaches, dizziness, and nausea. Bad smells or waste created by factories, garbage, or sewer systems are considered as pollution, too. These odors are less serious but still unpleasant.

While we debate on pollution, we should understand that pollution has long-term consequences for people. The long-term effects of pollution can keep going for quite a long time or for a whole lifetime. They can even be the reason for an individual losing their life. Long-term health effects from pollution include heart disease, lung cancer, and respiratory diseases. Pollution can also cause long-term damage to people’s nerves, brain, kidneys, liver, and other organs. People react differently to different types of pollution. Young children and older adults, whose immune systems tend to be weaker, are often more sensitive to pollution. Conditions such as asthma, heart disease, and lung disease can be made worse by exposure to pollution. The length of exposure and the amount and type of pollutants are also factors.

Students can also get a Paragraph on Pollution and Pollution Essay for Students from here.

In a debate on pollution, I might want to also highlight the concern that very much like individuals or human beings, even creatures, and plants, rather our whole biological systems can experience harmful effects caused because of air pollution. Pollution particles in the end fall back to Earth. Pollution can directly contaminate the outer or the upper layer of water bodies or even soil. This can kill crops or reduce their yield. It can kill trees and plants that provide us with clean and fresh air to breathe.

Harmful chemicals like Sulphur dioxide and nitrogen oxide particles in the air can create acid rain when they mix with water and oxygen in the atmosphere. These air pollutants come mostly from coal-fired power plants and motor vehicles. When acid rain falls to Earth, it damages plants by changing soil composition; degrades water quality in rivers, lakes, and streams; damages crops; and can cause buildings and monuments to decay.

Like people, even animals experience the ill effects of exposure to pollution. Birth deformities, illnesses, and lower survival rates have all been caused due to pollution.

Finally, to conclude a debate on Pollution I might want to express that all of us can do small things and can find ways to reduce pollution. A huge number of individuals are now looking at ways they can adapt to a lifestyle change and try reducing the harmful effects of pollution. A few ways in which we all can reduce pollution are by taking public transportation as opposed to driving a vehicle or riding a bicycle as opposed to going in carbon dioxide-producing vehicles in several different ways to decrease pollution. Avoiding aerosol cans, recycling yard trimmings instead of burning them, and not smoking cigarettes are others. Let us understand that, “The future is in our hands, let us be a part of the solution and not a part of the pollution”. 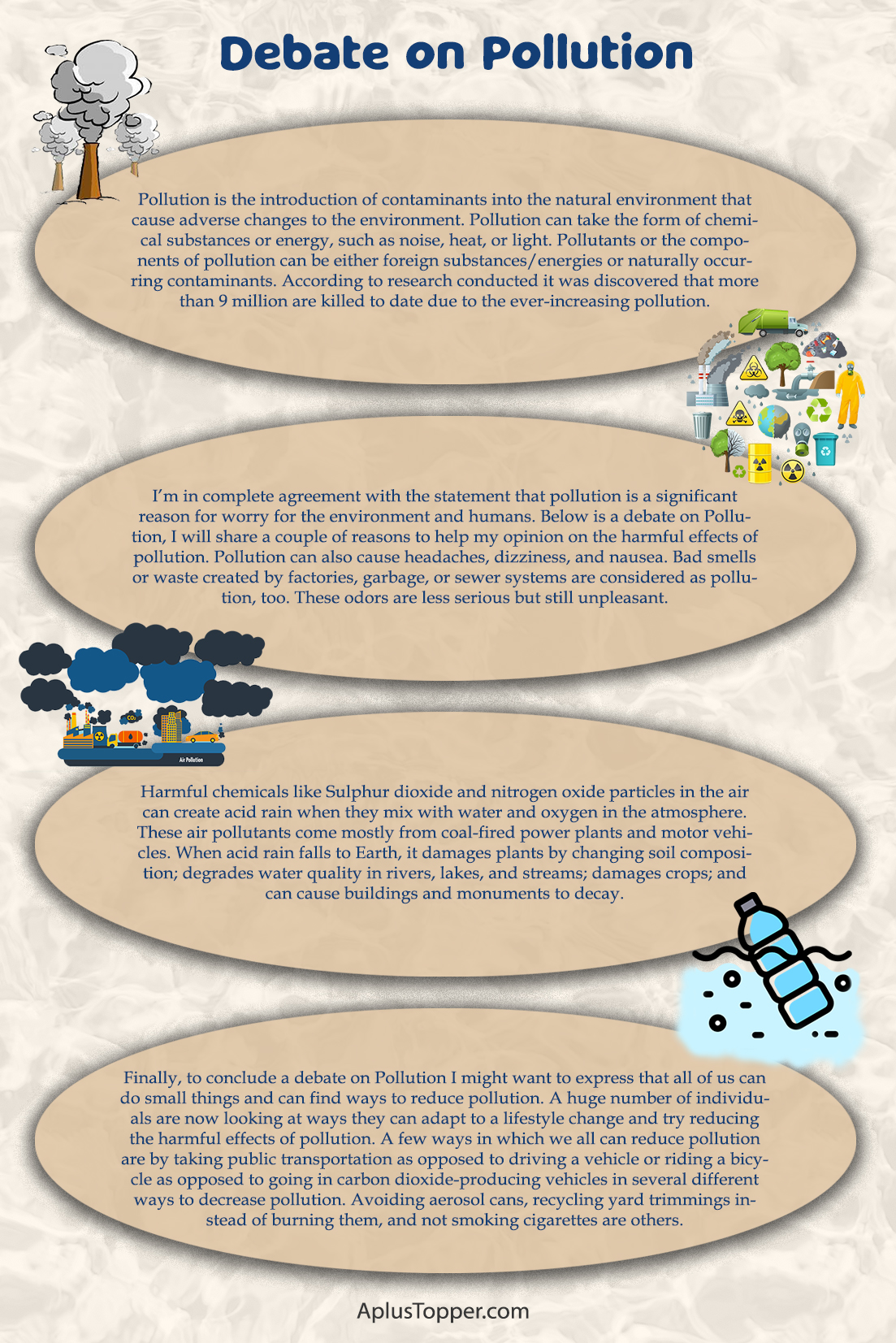 FAQ’s on Debate on Pollution

Question 1.
What is Pollution?

Answer:
Pollution is the introduction of contaminants into the natural environment that cause adverse changes to the environment. Pollution can take the form of chemical substances or energy, such as noise, heat, or light. Pollutants or the components of pollution can be either foreign substances/energies or naturally occurring contaminants. According to research conducted it was discovered that more than 9 million are killed to date due to the ever-increasing pollution. Major forms of pollution include air pollution, light pollution, litter, noise pollution, plastic pollution, soil contamination, radioactive contamination, thermal pollution, visual pollution, and water pollution.

Question 2.
What are the ill effects of pollution?

Question 3.
What steps can we take to reduce pollution?

Answer:
Reducing air pollution is the need of the hour and here are a few ways that we can ensure that we help in reducing pollution. First and foremost, planting more trees will increase the amount of fresh air, using electric vehicles instead of petrol and diesel vehicles, carpooling to places or using environmentally friendly vehicles like a bicycle. The best thing we can do for the environment is to walk short distances.

Question 4.
What is pollution control?

Answer:
Pollution control is a term used in environmental management. It means the control of emissions and effluents into air, water or soil. Without pollution control, the waste products from overconsumption, heating, agriculture, mining, manufacturing, transportation and other human activities, whether they accumulate or disperse, will degrade the environment. In the hierarchy of controls, pollution prevention and waste minimization are more desirable than pollution control. In the field of land development, low-impact development is a similar technique for the prevention of urban runoff.