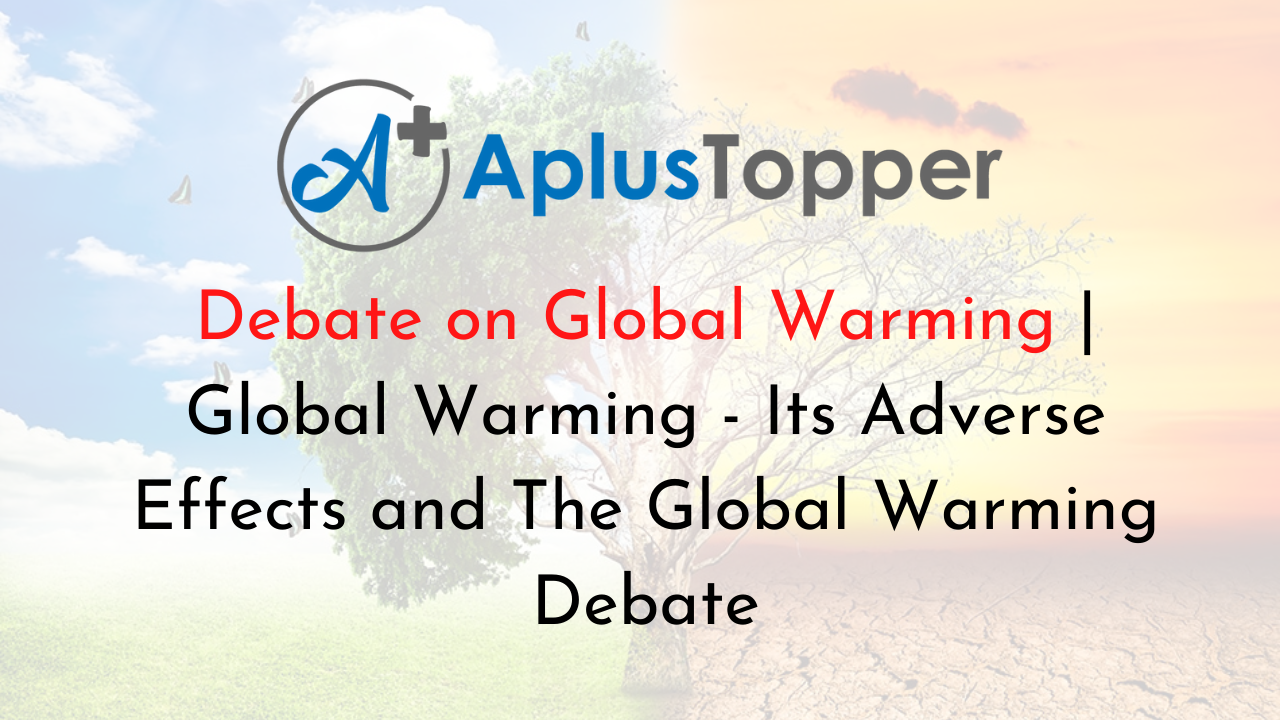 Global warming is expected to have far-reaching, long-lasting and devastating consequences for planet Earth.

What exactly is global warming? Global warming is the term to describe the overall climate change to the Earth, that is a significant increase in the Earth’s temperature over a relatively short period of time. Because of the industrial revolution, the global annual temperature has increased by more than 10 Celsius or about 2 0 Fahrenheit. So what was the result? Our planet earth has turned to be hotter year by year. It is observed that nine of the 10 warmest years have occurred since 2005—and the 5 warmest years on record have all occurred since 2015. It doesn’t just affect the northern hemisphere, or the southern but the globe in all. The main reason for Global warming is the release of several greenhouse gases (carbon dioxide, methane and nitrous oxide) into the atmosphere by human activities.

Debate on Global Warming is a hot issue ever discussed. Many climate experts have argued that there has been a slowdown in rising global temperatures, but numerous studies have disproved this claim.

Debate on Global Warming highlights the adverse effect it has on all the living creatures on the Earth.

Global Warming results in a warm climate because of which glaciers are melting which is causing the rise in the sea level. When the level of the sea rises, it destroys some of the plants emerging them in water. If plants die, animals lose their main source of food. In turn, we, human beings, will lose both our sources of food, that is plants and animals.  When the level of the sea rises, it causes danger to the people living in coastal areas. People will also lose their homes in sea waves. In other words, the whole food chain will get affected if nothing is done on time to stop global warming 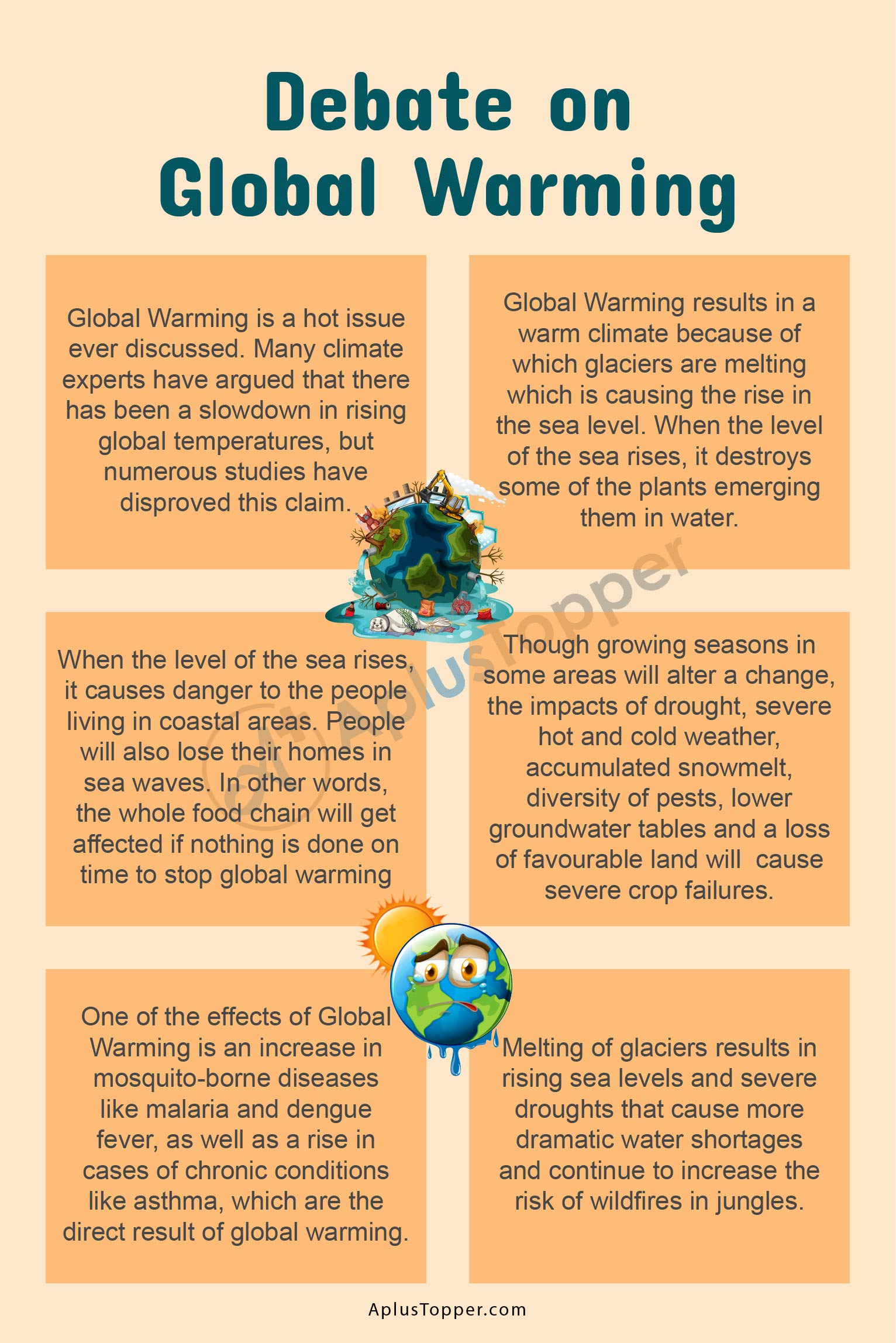 Debate on Global Warming points out how the impacts of global warming are harming people all around the earth.

Climate experts have concluded that we must limit global warming to 1.5 degrees Celsius by 2040, or we have to face the most adverse effects like extreme droughts, wildfires, floods, tropical storms, and other disasters. These effects are felt by all people in one way or another. For example, lengthy drought in California—the state’s worst water shortage in 1,200 years had been intensified by 15 to 20 percent by global warming.

Extreme heatwaves and an increase in temperature more than expected have caused thousands of deaths around the world in recent years.

Though growing seasons in some areas will alter a change, the impacts of drought, severe hot and cold weather, accumulated snowmelt, diversity of pests, lower groundwater tables and a loss of favourable land will  cause severe crop failures and livestock shortages around the world. So farmers will be left with no option for their livelihood.

One of the effects of Global Warming is an increase in mosquito-borne diseases like malaria and dengue fever, as well as a rise in cases of chronic conditions like asthma, which are the direct result of global warming. One such example is the outbreak of the Zika virus in the year 2016, a mosquito-borne illness, which highlighted the dangers of climate change.

If we aren’t able to get control of our emissions, debate on Global Warming highlights the consequences of what we can look forward to:

Here I conclude my Debate on Global Warming with the conclusion that because of the increase in global temperature, global warming is on the climb. So now it’s time to save energy: Turn off electric appliances when not in use, or carpool with your colleagues. Use the resources carefully. Ans Save Energy as much as possible.

FAQ’s on Debate on Global Warming

Question 1.
How can one contribute to controlling Global Warming?

Answer:
Wondering how you can fight against global warming? The very first step is to reduce your own carbon footprint by taking a few easy steps: Make conserving energy a part of your daily routine. Off the electrical appliances like tube light, fan, AC, etc when not in use. When you shop for new appliances like refrigerators, washing machines, and dryers, look for products with the government’s ENERGY STAR® label; they meet a higher standard for energy efficiency. When you buy a car, look for one with the highest gas mileage and lowest carbon dioxide emissions. You can also reduce your carbon emissions by taking public transportation or carpooling when possible. Support eco-friendly campaigns.

Question 2.
What are the main factors causing Global Warming?

Answer:
The main factors that lead to Global Warming are:

Question 3.
Is Global Warming a serious threat to our planet Earth?

Answer:
Yes, Global Warming if not controlled will be a serious threat to our planet Earth. Because frequent and intense drought, storms, heatwaves, rising sea levels, melting glaciers and warming oceans can directly harm animals, destroy the places they live, and also affect people’s livelihoods and communities. Increases in pests and diseases reduce the availability of food. Heat causes poor yields or crop failures.