What is Air Pressure

The pressure exerted by air is called air pressure. The air in the atmosphere exerts pressure on every object and in all directions (up, down, left, right, etc.). The pressure exerted by the atmosphere depends on many factors. For example, it depends on the height of a place and also on the temperature. Generally, places at a lower temperature are at a higher pressure than places at a higher temperature. Air moves from an area of higher pressure to an area of lower pressure. This causes wind. The converse is also true. Moving air causes a variation in pressure.

Aim: To show that air exerts pressure (adult supervision required)
Materials needed: A tin/thin metal can with an air tight cap, a stove/Bunsen burner, kitchen sink/wash basin, tongs to hold the hot can, and a small thick towel.
Method:

Observation: The can slowly crumples up.
Conclusion: This happens because when the can is heated, the steam produced pushes out most of the air in the can. When it cools down, the steam in the can condenses and leaves a near vacuum in the can (except for the remaining water), and the pressure of the air outside the can is large enough to compress and crush it. This shows that air exerts pressure.

Wind Is Caused By The Uneven Heating Of The Earth

Wind is the movement of air (usually in a horizontal direction) in the atmosphere. It is caused by a difference in temperatures between different ‘ regions on the Earth. This temperature difference occurs mainly because of the uneven i heating of different parts of the Earth’s surface by the sun. Thus, the air absorbs different amounts of = heat, making it warm in places and cool in others.

As air gets warmer, its particles spread out. In other words, air expands on heating. This makes the air lighter, or less dense, so it rises. As air cools, it becomes heavier, or more dense, and sinks. As warm air rises, air from cooler areas flows in to take the place of the rising air. This sets up a current of air and we call it wind.

The heating and cooling on Earth happens very regularly with a change in seasons. This sets up seasonal winds such as the monsoon winds. During the summer, the land (in places close to the equator) becomes very hot compared to the ocean. Air over the land gets heated and rises, and cooler rain-bearing winds from over the ocean blow towards the land. These rain-bearing winds are called monsoon winds.

Interdependence Of Plants And Animals

A forest is home to many types of plants, animals, and microorganisms. The various organisms are interconnected and together form a biotic community or biota.

All animals depend on plants for food, directly or indirectly. For example, a rat eats grains and plants, a snake eats a rat, which is, in turn, eaten by an eagle. This chain that forms in nature is called a food chain. Green plants are called the producers as they can produce their own food. Animals are called consumers as they cannot produce their own food and depend on plants and other animals for food.

When animals die, their bodies are broken down (by decomposers like bacteria and fungi) and they become a part of the soil. This makes the soil fertile for the growth of plants. These plants again become food sources for the animals. Thus, the food chain goes on and on. Food chains are simple representations of energy flow in nature. They exist everywhere, be it in the pond or the ocean, the grassland, desert, or the mountain.

Several food chains that exist in nature are interconnected. For example, both a rat and a hen eat grains. Both of them can be eaten by a cat. A cat can be eaten by a bigger animal such as a wolf. However, a wolf can also eat a hen and a rat directly. There also exists a more complex representation of energy flow in nature which is called food web, as it appears like a web that a spider spins. You too are a part of the food web.

What Is A Cyclone And How It Is Formed

Cyclones (or hurricanes) develop over the warm moist waters of the oceans near the equator. The water heats up the atmosphere above it. Warm air rises and cooler air from the surroundings rushes in to take its place. This results in a number of small thunderstorms over the ocean. All these small storms then merge into one complex storm.

If a storm stays over water, it will continue to grow. Due to the rotation of the Earth, these winds start spinning. Wind speeds at this time are less than 60 km/h. If the wind speed climbs above 64 km/h, it is called a tropical storm. Some tropical storms die out in a few days, while others may continue to grow and develop into full-fledged cyclones with wind speeds well over 120 km/h.

As a cyclone forms, the pressure falls in the centre of the storm and this is called the eye of the storm. It could be 16 to 32 km across. Although there are strong winds around the eye, within it everything is calm. Cyclones can be huge. Some can even be 800 km across.

Damage Caused by a Cyclone

Cyclone winds travel at very great speeds. When a cyclone strikes, trees can be uprooted and buildings flattened. It is accompanied by very heavy rains. Cyclones can cover a large area. They are shaped like huge spirals and can be seen and tracked by satellites. Another interesting fact is that they circulate counterclockwise in the Northern Hemisphere and clockwise in the Southern Hemisphere.

A tornado is a violent spinning storm typically shaped like a funnel with the narrow end on the ground.
Tornadoes develop from thunderstorms and are formed mostly on land (tornadoes formed over sea are called water spouts). They are the most violent small-scale storms on Earth. The fast swirling winds may reach speeds of over 500 km/h, destroying virtually everything in their path. Unlike hurricanes, tornadoes are usually narrow, about 0.5 km wide and rarely do they move beyond 20 km.

Safety Measures During a Storm

Prevention of further depletion of forests is called conservation of forests. Few measures that could be followed to conserve our forests are given below.

Afforestation: People should be made aware of the damages caused by felling of trees. Governments and communities should take steps to plant trees on a large scale. Afforestation is the large-scale planting of trees on lands where there were no forests previously.

Planned cultivation: A forest should not be cleared of all its trees and converted into an agricultural land; this can lead to soil erosion.

Protection from forestfires: Forest fires are considered beneficial for plants, but they might have devastating effects on animal life and people living nearby. These forest fires can be prevented by being careful while burning debris. Fire retardants and water bombs are also used to prevent forest fires. 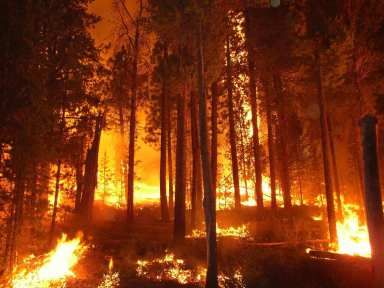