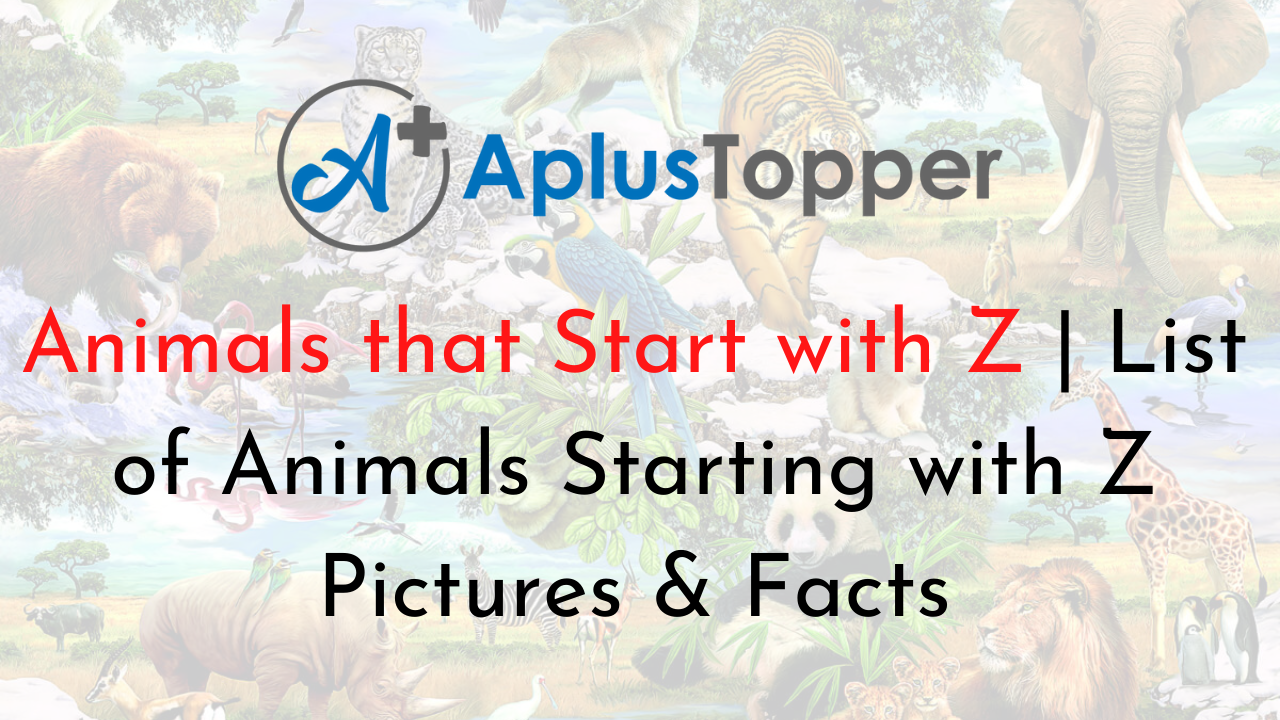 Animals that start with Z: As a kid, the only animals we knew were among the domestic animals we had every day. As we went to a higher grade, we were introduced to a greater variety of animals, primarily seen in books or Television shows.

With such a considerable number of animal species, it is impossible to remember all their names; hence let us categorize the names of animals in alphabetical order so that it becomes easier for us to remember.

Today In this article, let us look through the list of animals whose names begin with the letter Z.

Name of Animals Whose Name Starts With Z

List of Animal Names With Letter Z At The Start

A group of Zebras is known as ‘Dazzle.’ Zebras can travel long distances and are also a part of the “Great Migration.” Zebras are Black with white stripes.

Zebu, also known as Indicine or Humped Cattle, is an Indian subspecies of domestic cattle. Zebu is an evolved species of cattle species called Aurochs, which is now extinct. There are 75 distinct species of Zebu, and they differ from each other by their characteristic features.

Zebu has the familiar large hump on their back and dropping ears. Both male and fake Zebu have horns, and their speed can reach up to 25 miles/hour if faced with danger. On average, Zebu’s can survive around 15 to 20 years. 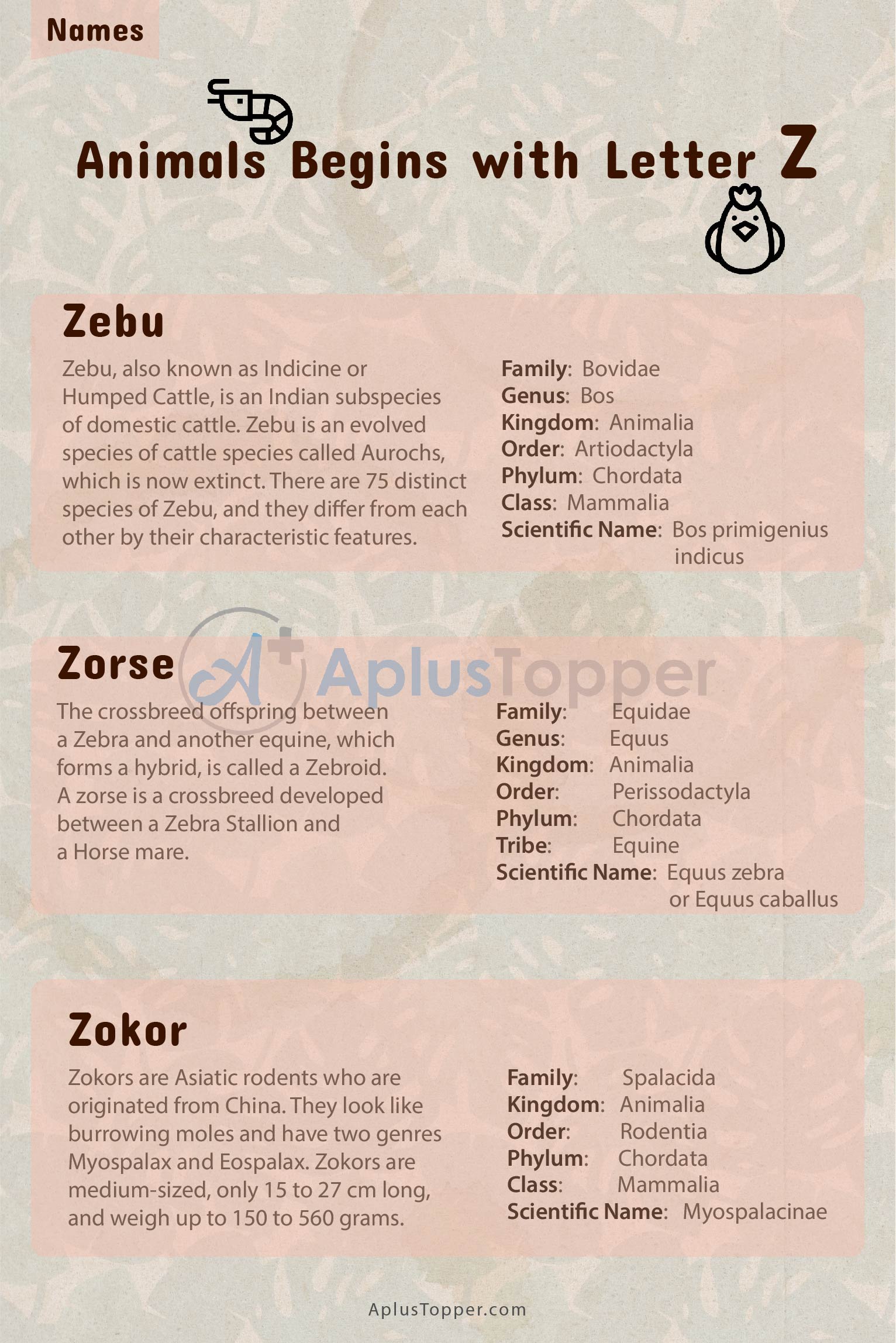 Zebrafish is a popular freshwater aquarium fish. Its origin comes from South Asia, and it is sold under its trade name Zebra Danio. They are extremely popular Nano fish since size only goes up to two, or two and a half inches. Zebra Danio can also reach up to three inches, but that is a rare case.

This popular Nano fish has some similarities with humans when it comes to organs, which is why they are used as test models when it comes to human-related diseases like nonalcoholic fatty liver disease, dyslipidemia type 2 diabetes mellitus, and other hepatic diseases.

Zebrafish also have a unique ability. A zebrafish can repair the muscles of its heart. For example, if we removed a particular part of their heart, they would quickly grow it back in a matter of weeks.

A zorse mostly looks like a Horse in shape than a Zebra, but it does have strips around its legs, necks, and sometimes body. Even if Zorse is a sterile animal who shows normal breeding behavior, just like some other hybrids, they cannot reproduce independently.

A Zorse can be kept as a sweet pet, often used for riding.

Zebra Finch is one of the most common estrildid finches of Central Australia. The name Zebra finch comes from the black and white stripes of their body. Researchers have revealed that the neuron activity in the brains of the zebra finches is like ours. They also dream when they sleep.

Also, other than being adorable pet birds, the Zebra finch is the fastest maturing bird. They can breed from their 70th or 80th day, and the young offspring would be ready to set free in a span of 2 months.

A Zonkey is a cross between a Donkey and a Zebra. A Zonkey is shaped like a petite horse, with a black mane and with a big head and large ears. They look more like a donkey than a Zebra.

Zonkeys are solid and fast, and they can reach up to a speed of 30mph. Just like other hybrids, Zonkeys cannot breed. Even if Zonkey is used as work animals because of their strength, Zonkeys are not very friendly when it comes to human interaction since they inherited the aggressive behavior towards humans from their Zebra parent.

Zorilla is also known as a Zoril or Zorille, or a striped polecat. The word itself is obtained from the Spanish word Zorro which means fox.

They look like shunks, but they are not. Their life span is around 13 years, and they are night hunters. Zorilla uses high-pitched sound to communicate and to scare away the predators. 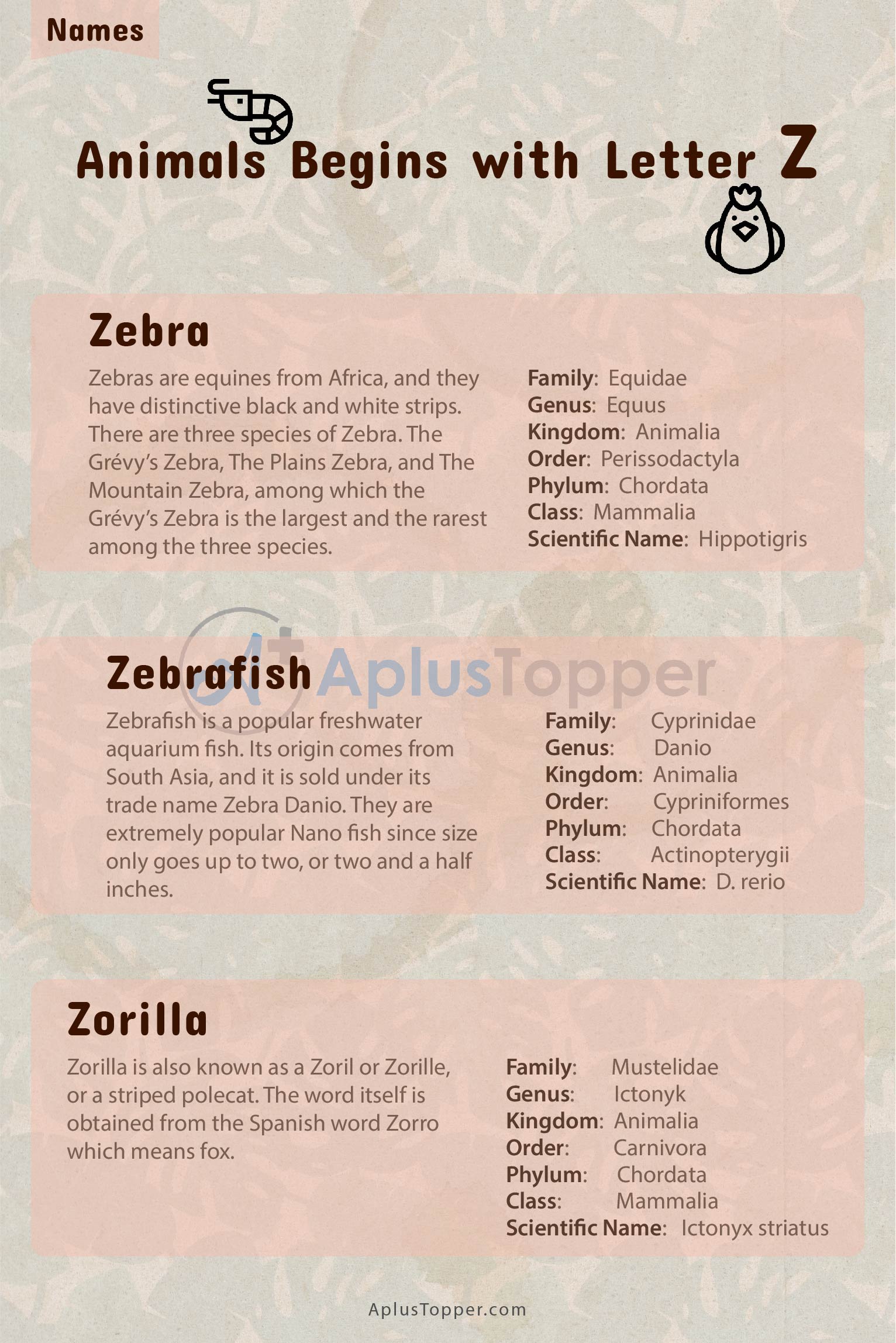 Zokors are Asiatic rodents who are originated from China. They look like burrowing moles and have two genres Myospalax and Eospalax. Zokors are medium-sized, only 15 to 27 cm long, and weigh up to 150 to 560 grams.

Zigzag salamanders are Secretive Northern amphibians. They are mostly found under rocks or trees and most hidden places. They mostly prefer moist landscapes and usually feed on smaller organisms.

The Zapata Wren are medium-sized birds of the dense shrubs of the Zapata Swap of Cuba. These birds are greyish brown and are highly secretive. It is around 16 cm long with a long tail.

They are brown birds with greyish and black strips on their lower half. They are also signed under Endangered species and are on the verge of extinction from the wild.

A Zebra Duiker is a small antelope found in Liberia. They are fruit and foliage browers. Their diet contains fruits and small shrubs, leaves, and grass. Zebra Duikers usually live for 11 to 13 years and are now in a Vulnerable situation, which is their population is decreasing rapidly.

Zebra Shark also known as Leopard Sharks, are found throughout the Info Pacific region, are Carpet sharks. They are nocturnal fishes, and they usually hunt at night. They are born with a yellowish body and black stripes, which are later replaced by black dots.

Zenaida doves make up a small group of American doves. Zenaida dove is also the National Bird of Anguilla, where they are also known as Turtle Dove. They look a lot like the Mourning birds but are smaller in size. They are found throughout the Caribbean and in Northern and Central America.