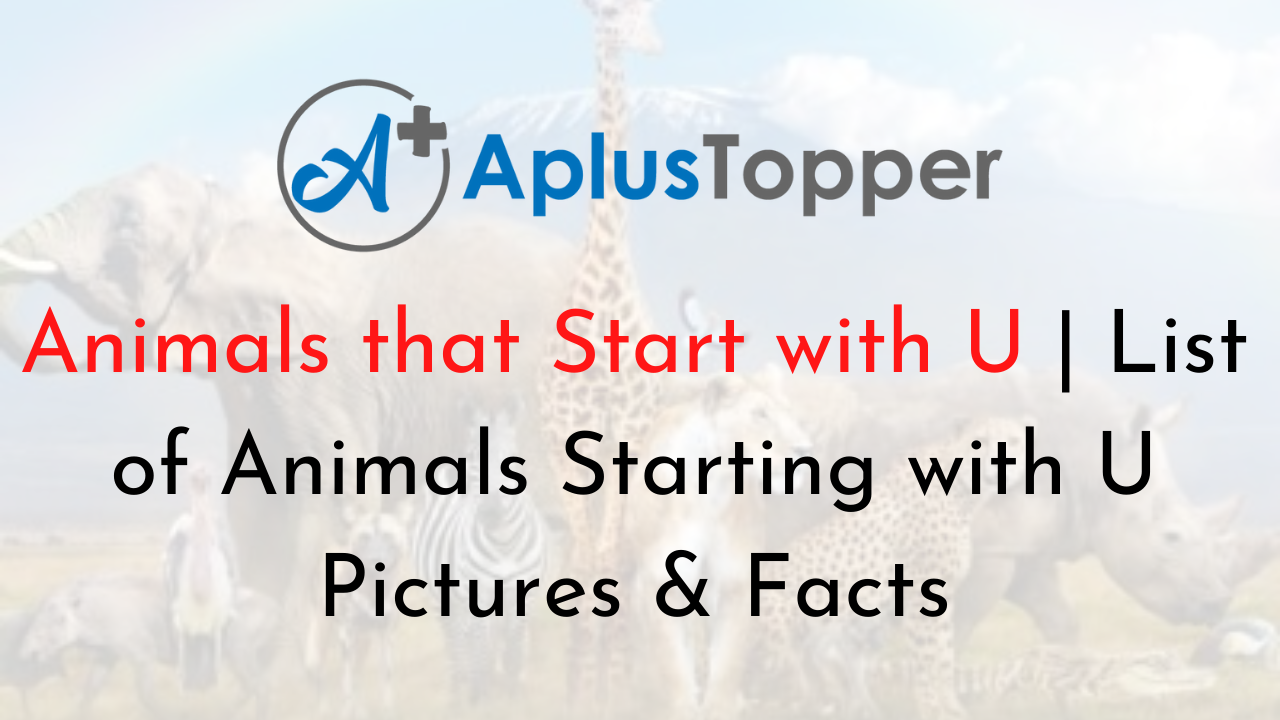 Animals that start with U: This world is a beautiful place filled with wonderful creatures. Do you happen to know about all the animals whose names start with the letter U? In this writing, we have included a list of animals whose names begin with the letter U. These animals are distributed all across the world on different continents. We have also included some interesting facts about the animals in this article, which makes the experience of learning even more fun.

Name of Animals Whose Name Start With U

List of Animal Names With Letter U At The Start

These monkeys are short-tailed, with a long, coarse coat and a white, bare red or white face found in the Amazon rainforest. They feed on a heavy fruit diet but also consumes some insects and leaves. The life span of these monkeys is generally ranged between 15 to 20 years. They have a very short tail for their size.

These are a subspecies of the kob, a variety of antelope. These animals are found along the north savanna in Uganda, South Sudan and the Democratic Republic of Congo. They are herbivores, and they feed primarily on reeds and grasses. They have a medium-sized brown coat, large ears and medium length horns.

Also known as the Japanese bush warbler, it is an Asian passerine bird that is heard more often it is seen. It has a distinctive breeding song that can be heard throughout a major part of Japan from the beginning of Spring. They are found in mountainous regions at different altitudes, both high and low mountainous forests.

These animals are found in the Democratic Republic of Congo, Uganda and the Central African Republic. These are solitary carnivores, and they belong to the shrew family. 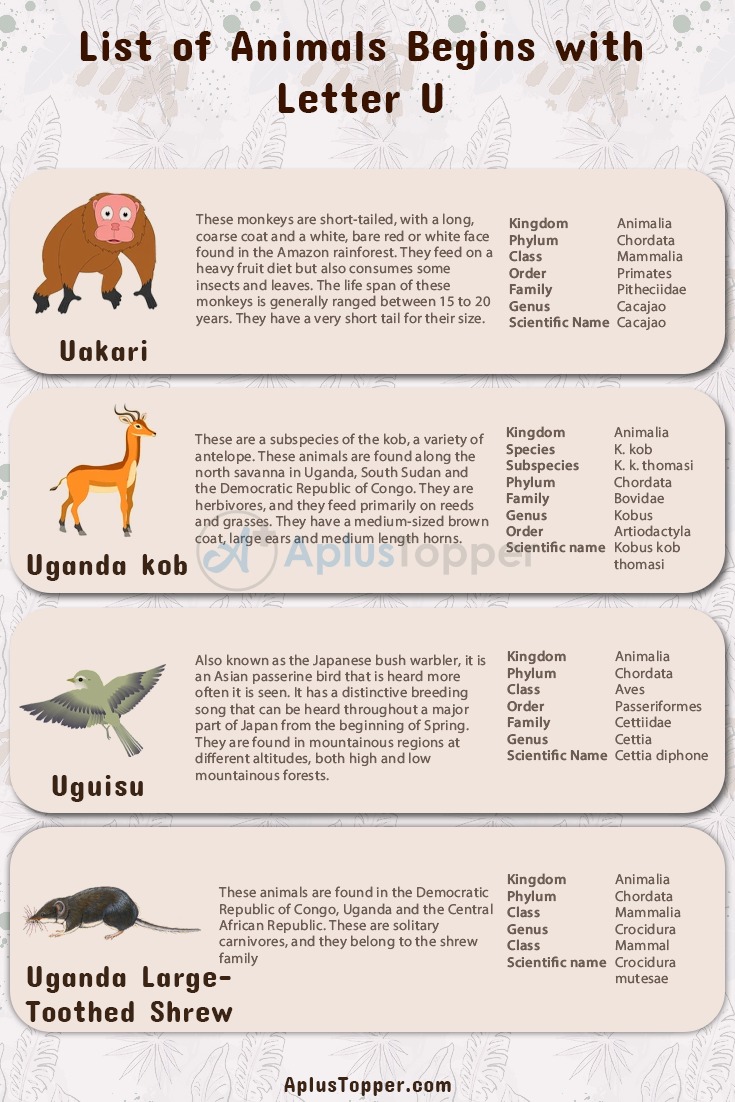 These mammals are found in Uganda, the Central African Republic and the Democratic Republic of Congo. An adult can weigh up to 24 gm. They can grow to a head and body length of 115mm, with the tail extending to 64 mm. These mammals are similar to the African giant shrew. However, they are a little smaller with a smaller and less robust skull.

Also known as the hidden forest chipmunks, these chipmunks are endemic to the United States. These chipmunks are medium-sized with adults with a length of 20 to 24 cm. They live in forests of montane and subalpine between the elevation of 4,590 and 11,980 ft. These are herbivorous animals feeding mainly on seeds from coniferous trees.

Known as Potgut in northern Utah and “chisler” is a rodent species to the western United Species. These omnivores weigh 310gm when they are adults. They take habitat in open areas, like pasture, meadows and shrub-steppe habitats at an elevation between 4,000 and 8,010 ft. They are herbivores feeding primarily on seeds, grass and leaves.

Also commonly known as the blue emperor, they are found in Indonesia, Australia, the Solomon Islands and Papua New Guinea. Its size can differ depending on its subspecies. These butterflies are also used as an emblem of tourism in Queensland, Australia. They have a wingspan of 14 cm.

These mammals are endemic to Kenya. Its preferred habitat is tropical or subtropical moist montane forests. The greatest threat to these animals is the loss of habitat. They need to feed or chomp on earthworms or insects, or else they are going to starve to death. 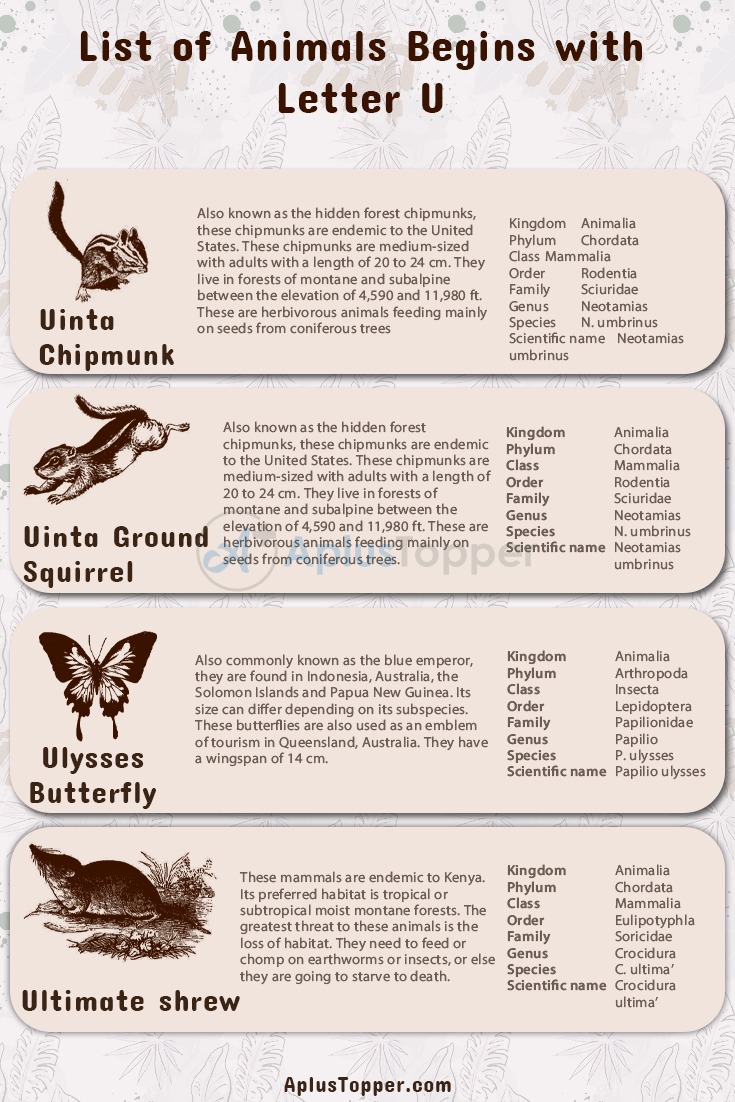 Also known as the white-browed blue flycatcher, these birds breed in the foothills of Himalaya during summer and in southern India during the winters. They are a little smaller in size than a sparrow.

These birds are found in the semi-open habitats in central and eastern South America and a distributed population in northern South America. These birds can grow up to 15 cm. The adult males showcase dark blue plumage with bright blue upper wings. At the same time, the juveniles and females are brown.

Found in the Solomon Islands and Bougainville Island, these birds are in tropical or subtropical moist lowland forests.

These are species of parrots that have habituated in tropical or subtropical moist lowland forests. It has been threatened by deforestation and the introduction of the black rat. They feed on a large variety of pollen, nectar and flowers from different flowering trees. They also eat insects and fruits. They have been listed as critically endangered.

These mammals are found in the Solomon Islands and Papua New Guinea.

These animals are found in north-eastern Queensland, Australia. It gets its name as it is plainer than most of its relatives. They are patchily distributed from near Townsville to Rockhampton.

These are species of rodents found on two islands in the Alaskan region of the United States.

These species of bats are sandy brown. These bats have a wingspan of 20 to 22 inches, making them the second largest bat in the United States. They feed on leafhoppers, grasshoppers, beetles and moths. They favour dry roosting sites and prefer roosting in under palm fronds and tree hollows, far off the ground.

These species of bats are found in Mexico, Panama, Nicaragua and Guatemala.

These birds’ prey on frogs, fruits and insects. They migrate up and down the mountains. These birds have black feathers and umbrella-like crests. They prefer finding habitat in high and low altitude rainforests in southern and central America. They have an expected life span of 12 to 20 years, and they reach their age of sexual maturity at the age of 2 or 4 years.

These are two-toed sloths that originated from South America. They have a gestation period of 182 days, and adults can weigh up to 6.2 kg. These omnivores can grow up to a length of 69 cm. They live in subtropical and tropical forests from sea level up the about 2,400 m.

These fishes live around the coral reefs and mostly eat algae as well as flour in the Maldives. They are prevalent in the Maldives. There are almost 20 currently establishes species from this species. These are marine fishes and have a long, silver and eel-like body. It has been given its name from the horn-like projection on its face resembling a unicorn’s horn.

These species of rodents are found only in Colombia. They have been labelled as vulnerable.

These short-furred Atlantic tree rats are a spiny rat species found in South America. They are found mainly in Brazil. They have been labelled as critically endangered.

Also known as Hoopes, these colourful birds are found across Asia, Africa, and Europe. They have a notable ‘crown’ of feathers. There are three living and one extinct species of these birds. They primarily feed on frogs, spiders, insects and plant matter like seeds.

These are wild sheep that have long legs and relatively small horns that originated in central Asia. They have been listed as vulnerable, and their life span differs from species type and with race. These sheep are herbivores and feed on a range of unspecified plants – probably shrubs and grasses. They also eat grains. They have large horns curling outwards from the top of their head.

These are a genus of Asian and African agamid lizards and are called spiny-tailed lizards or dabb lizards. These lizards are primarily herbivores but occasionally feed on small animals and insects. They spend mainly their waking hours basking in the sun. They prefer living in hilly, rocky areas with accessible vegetation and good shelter.

These are ground-dwelling rodents and are found in many parts of eastern African countries. They live in shrublands and dry savannas. They have a sandy-brown colour, and unlike the other African ground squirrels, they lack stripes along their sides. They live in burrows, eat fruits, seeds and insects.

These rodents belong to the squirrel family of Sciuridae and are found only in North America. They are the smallest of the five species of prairie dogs and are located in the grasslands of Utah. Their colour ranges from sandy-yellow to pale, reddish-brown.