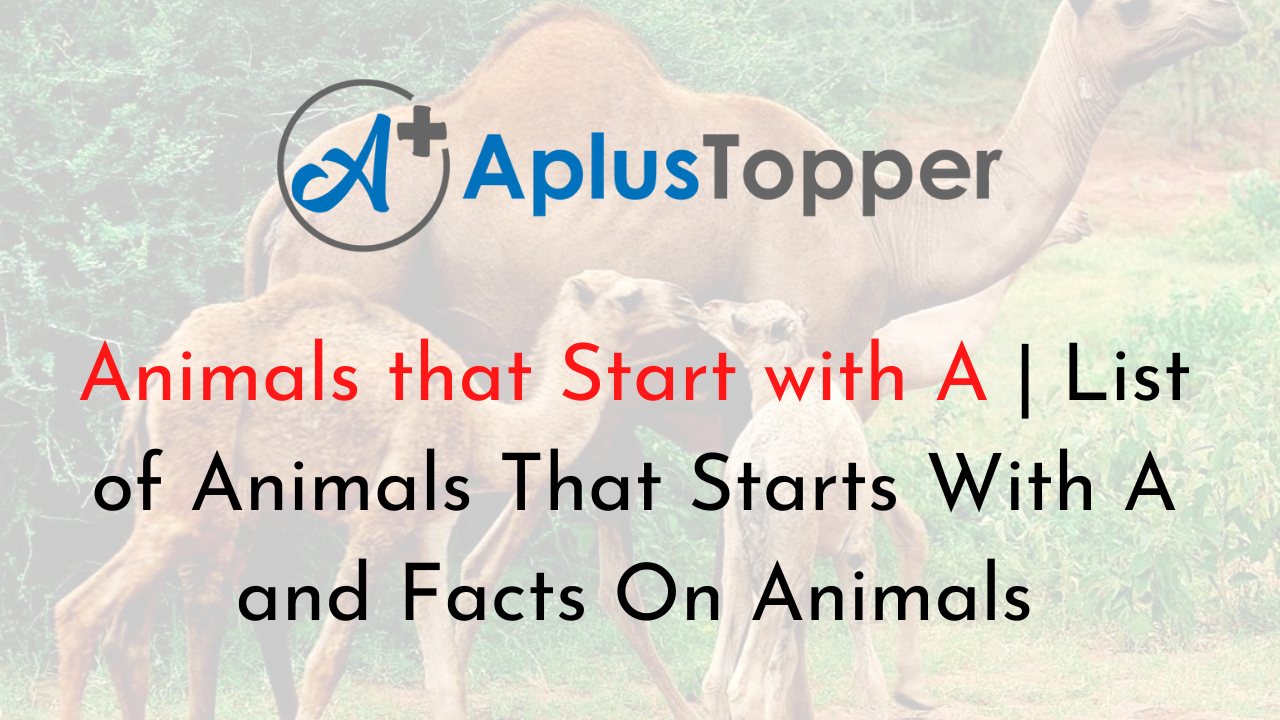 Animals that Start with A: How many animals can you name whose name starts with the alphabet A? If you don’t know many, no need to worry, we have included a list of animals worldwide whose names start with A. We can find these animals on all the continents, and we have included an interesting fact for each animal for your interest and knowledge.

Name of Animals Whose Name Starts With A

List of Animal Names With Letter A At The Start

It is a medium-sized, nocturnal mammal native in Africa. It might use its ribbon-like 30 cm long tongue to gather up to 50,000 ants in a single night.

They are one of the world’s most endangered mammals and can be identified by their irregular fur patterns and long legs.

Alligators are generally known as ecosystem engineers and can consume almost a quarter of their body weight in a single meal.

They are bird species that can go years without touching land and small food in water from 12 miles away.

They are found in only North America. Sea anemones are flower-like aquatic creatures that filter feed. Sea anemones, with their petal-like, frequently brightly colored tentacles, give visual advantage to humans in terms of appearance and shape, in complement to their ecological significance in the marine ecosystem.

They have two lungs and are highly venomous and suffocate their prey by winding around it, just like the associated and similar-looking pythons. Anacondas contribute to the biological balance of the environment by devouring rodents, fish, caimans, and even mammals like capybaras, tapirs, and deer.

Angelfish can grow to nearly ten inches. They are omnivores and are best kept with their kind. Their aquariums require specific conditions.

They have superhuman strength even with their small size. They don’t have lungs, and they breathe in oxygen through spiracles located on the sides of their bodies. 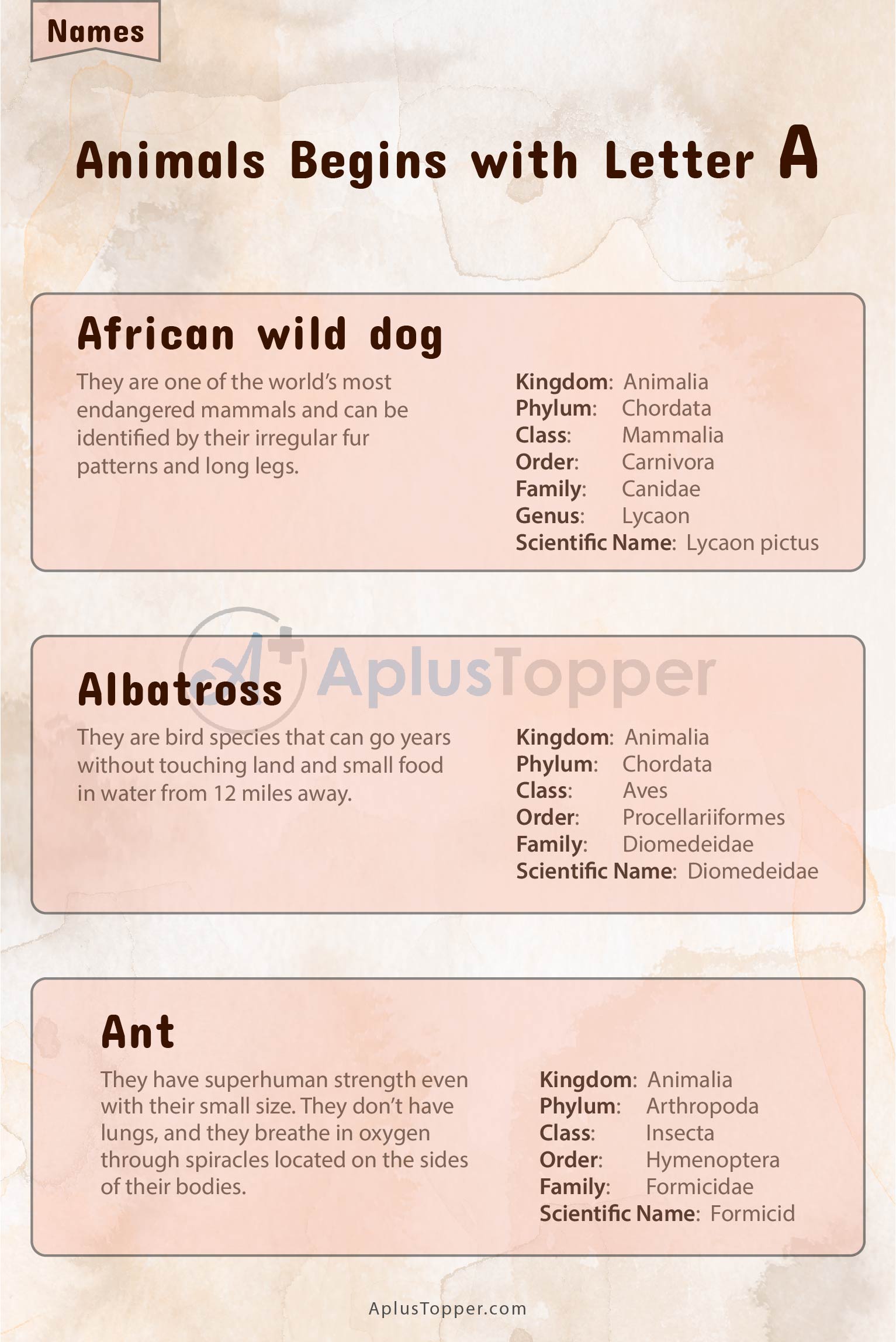 They are found in Africa, Eurasia, Europe, North-America, Oceania and South-America.

They are herbivores in nature, and they nibble on grass or munch on leaves. They are geniuses as they can comprehend the rains to locate tender grass. They sometimes eat bugs or even small birds.

All genuine apes, with the exception of gorillas and humans, are particularly adept tree climbers. The best way to characterise them is as omnivorous (generalized feeders that consume both animal protein and vegetation).

Their fur changes seasonally, and they are monogamous.

They look like babies for their whole life, and they can regenerate body parts.

Armadillos have one of the most unique characteristics of any animal. They closely resemble a combination between a polecat and a dinosaur with suits of armor.

It is the heaviest nocturnal mammal in the planet. It is different and unique in that it taps on trees to obtain grubs, then gnaws holes in the wood with its forward-slanting incisors to make a tiny slit into which it slides its slender middle finger to pull the worms out.

They are a clean bunch of animals and are safe to be around; however, they can’t live alone.

They are a sort of a lizard.

They have no teeth, but their tongues are more than enough to lap up to 35,000 ants.

They are usually found on the entire coast of the Antarctic continent, and they like to enjoy the beach during summertime.

They are a breed of dog which was initially made to eliminate mice and rats from kitchens, shops, and stables.

They will live to be between seven to ten years, and they are usually small and stocky. It is a strong swimmer.

They are one of the eldest dog breeds, and they are as fast as racehorses.

Their name is derived from the three short claws on each hind foot, which they use to tear their food.

They look like a raccoon with their broad head, long neck, and pointed muzzle. However, they have 40 sharp teeth to catch their prey.

They are the most abundant land creature in whole nature and the greatest of the three elephant species.

They are fluffy hunting dogs that We can find in Japan for hundreds of years.

They are tiny striped toad species and ranges from dark to light brown with patches of white on their belly.

They are huge-sized dog species and can reach 28 inches and weigh well over 110 pounds, but their life span is pretty short.

They are built for the snow and are still used in dogfighting. There’s a museum dedicated to them.

They are a hybrid dog species with wiry coats and have a long snout in proportion to their overall head length.

They were used for hunting rats and serving in the military, and being among the first police dogs.

This dog species is native to Turkey and was primarily used as a shepherd dog.

They are mixed breed dogs who shed their coats seasonally, which might mean that they are not allergy-friendly.

They are the most abundant animal on the atoll and are one of the longest-lived creatures on this planet.

They are bred for working and racing as they have great speed and endurance.

They often have two different and rare eye colors.

The albacore is one of the smallest species of tuna.

They are a dog species that don’t bark much but love to stretch their vocal cords and howl sometimes.

They are ray-finned fish, and their fossil record traces their existence back to the Early Cretaceous over 100 million years ago.

They are famous for their milking abilities, but they don’t have any set colors or markings.

They are a breed of dog which are highly efficient at the following trail even after it has gone cold.

It is a dog breed that is known for its sledging pulling skills.

They have broad square-shaped heads, pendant-shaped ears, muscular bodies, and strong legs. They are faster and more extensive than English bulldogs. They can jump obstacles that are 6 to 7 feet high.

They are sporting breed dogs. Their name derives from the woodcock. An American cocker spaniel was the first dog that detected cancer.

They used to guard and herder dogs, and later on, they became circus dogs. They are mainly of three sizes.

They were bred such that they hunt raccoons. They are very talkative, and they can climb trees as well.

They have an excellent nose for hunting foxes and similar prey like a coyote. It is a state animal of American state Virginia.

They have derived from violent beginnings, and as a result, they have a bad rap. They are usually medium-sized, short-haired dogs of a solid build.

The skin of an American hairless terrier is smooth and really warm on the touch. They have eyebrows and whiskers. They were developed from naturally hairless rat terriers.

The netting period of anchovies starts from March to September. There are 144 species in the 17 genera, found in the Pacific, Asian and Indian oceans.

Their mouth works like a vacuum. When they feel hungry, they open their mouth to suck up any food nearby. This fish can breathe air and can stay submerged for about 20 minutes at a time.

Aurochs is one of the extinct species of wild ox. They had a large skull and strong, muscular and shoulders, and their legs were more robust and longer than the legs of domestic cattle.

They are a medium-sized bear species native to Asia. They are primarily used to an arboreal way of living. Their fur around the neck area is exceptionally long.

They have a unique way of feeding themselves by thrusting their bill underwater and swinging it sideways along the bottom to mix up aquatic insects.

Australian mists are cat breeds and are medium-sized with a spotted coat, and they are found in various colors like gold, brown, lilac, peach, and a few more. They have large expressive eyes, which is very attractive.