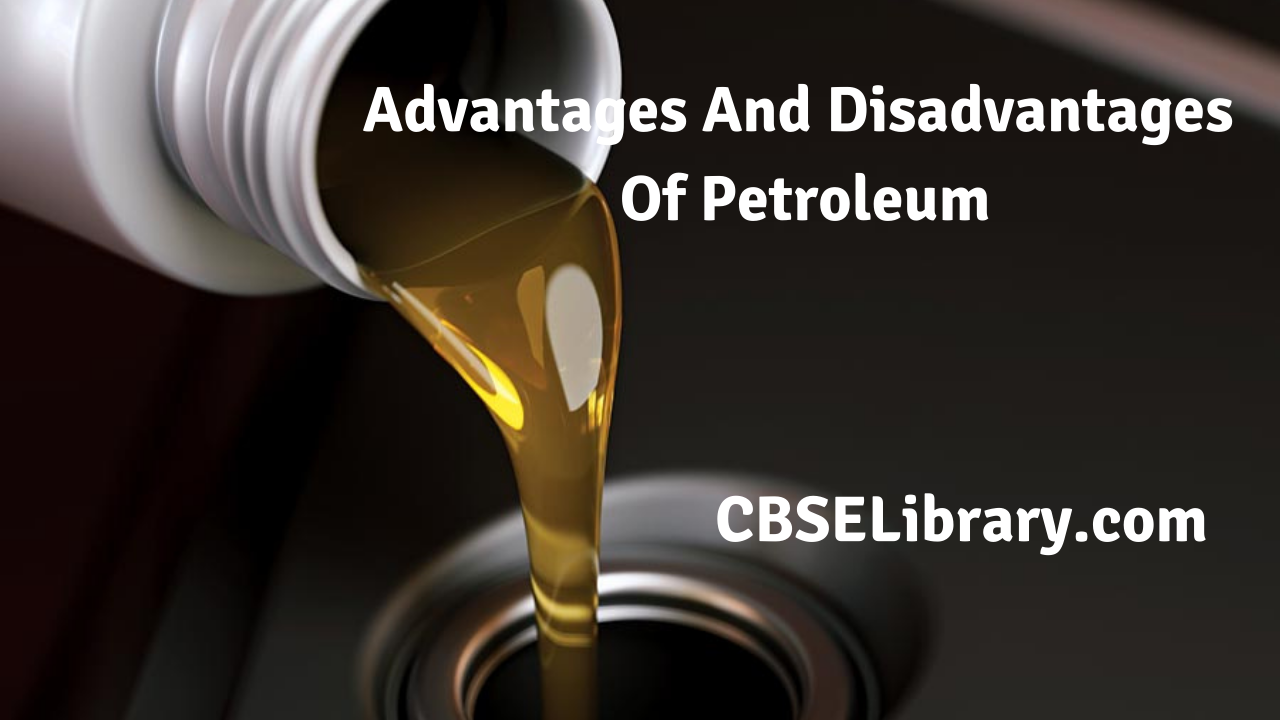 Advantages And Disadvantages Of Petroleum: Petroleum is better known as black gold. Petroleum is a natural product that is found under the deep layers of the earth.  Petroleum is a fossil fuel, hence it is obvious that it is made from the dead and decomposed organic materials buried inside the earth for millions of years. When these organic matter and microorganisms are exposed to extreme heat and pressure, then a fossil fuel is formed and petroleum is one. Petroleum is widely used in our daily lives. When it is refined, it can raise so many useful by-products which further can be used for domestic and commercial purposes. Because the usage and dependency on refined petroleum are far beyond the expectation, it contributes to global warming and environmental issues with a great difference. Let’s read the article ahead to get to know more about Petroleum.

What is Petroleum? What are the Advantages and Disadvantages of Petroleum?

Petroleum is a liquid mixture of hydrocarbons. This liquid, found in certain layers of rock, can be extracted and refined for use as fuel. Kerosene, gasoline, and petroleum are some of the derivatives of petroleum. It is vicious, flammable, and can also be converted to a variety of raw materials through derivative products right from asphalt to paraffin wax. The definition of petroleum is based on the viscosity and weight of the liquid. This is the usage of the terms light, medium, or heavy. If sulfur-free oil is found, it is said to be sweet. In the presence of sulfur, the final product is said to be acidic.

One of the most popular commodities that inspire our lifestyle today is the light, sweet crude oil, which is petroleum with the properties described by its name. The strengths and weaknesses of oil lead us in two extreme directions. On the other hand, frequent use of this resource can cause long-term damage to the planet.

Petroleum is a very versatile fossil fuel as, when refined, it gives you so many by-products like lubricants, kerosene oil, and gasoline. Gasoline is primarily used in motor vehicles and small engines like lawnmowers, cultivators, and trimmers. Kerosene oil is used for lighting purposes like in lamps, and heaters. Fuel oil is used in rockets and aerocrafts like jets and planes. Lubricants are used to lubricate rough and worn items like hinges of doors, chains, etc.

Is Petroleum a Renewable or Non-Renewable Energy?

Petroleum is a nonrenewable source of energy. Like other fossil fuels, it is also extracted from the deep layers of the earth through a very complex process. It is present in a limited amount and once used completely, it will disappear for good. However, there are so many good environment-friendly alternatives present to use which are eternal and in abundance like solar power, wind power, hydropower, and biofuels. Solar power uses solar energy to run, wind power needs fast-moving wind to generate power, and biofuel is made of the peels and thrown off of the veggies and fruits.

The advantages and disadvantages of petroleum are all equal. Nothing is perfect. With every pro, comes the cons and the same is with petroleum. 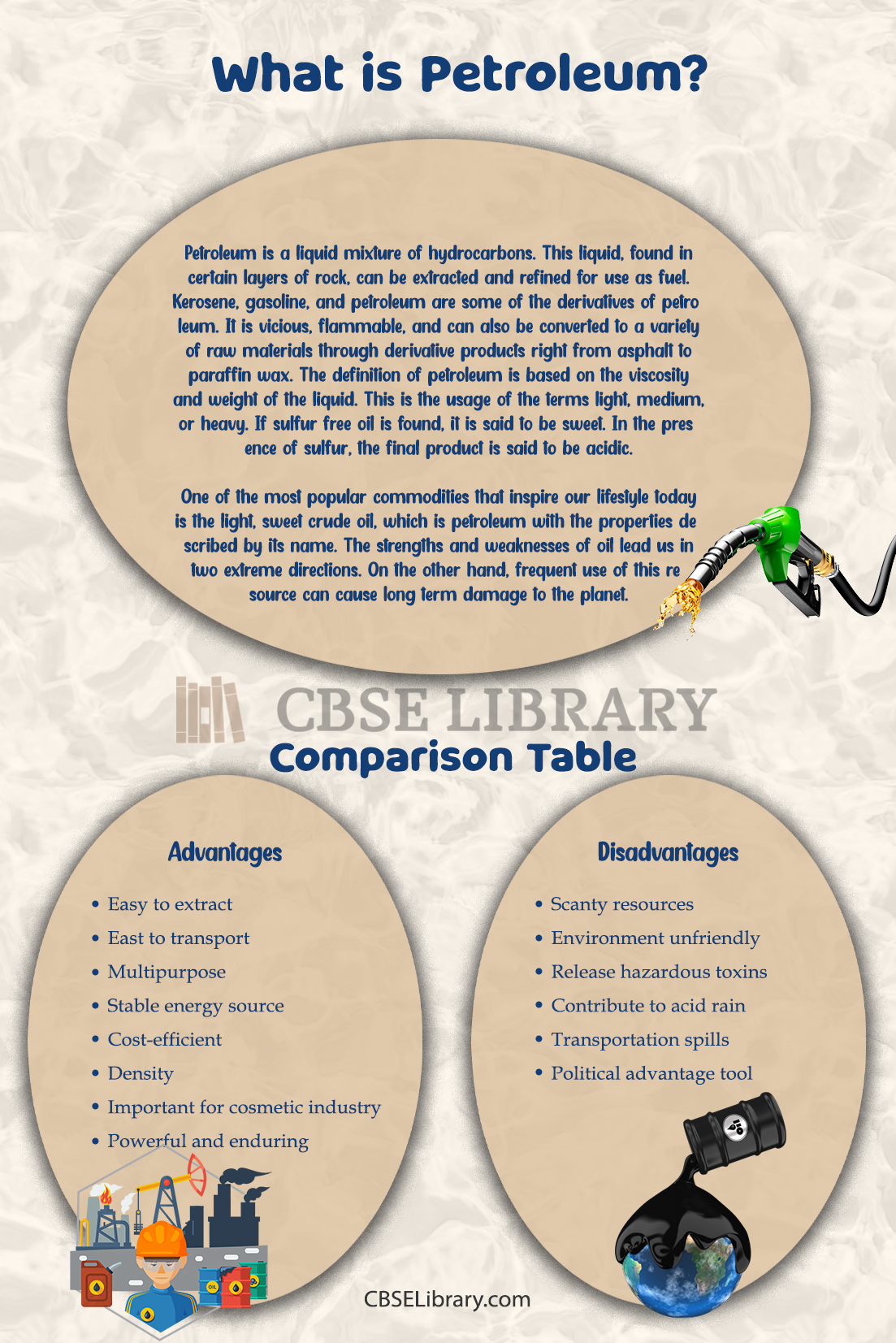 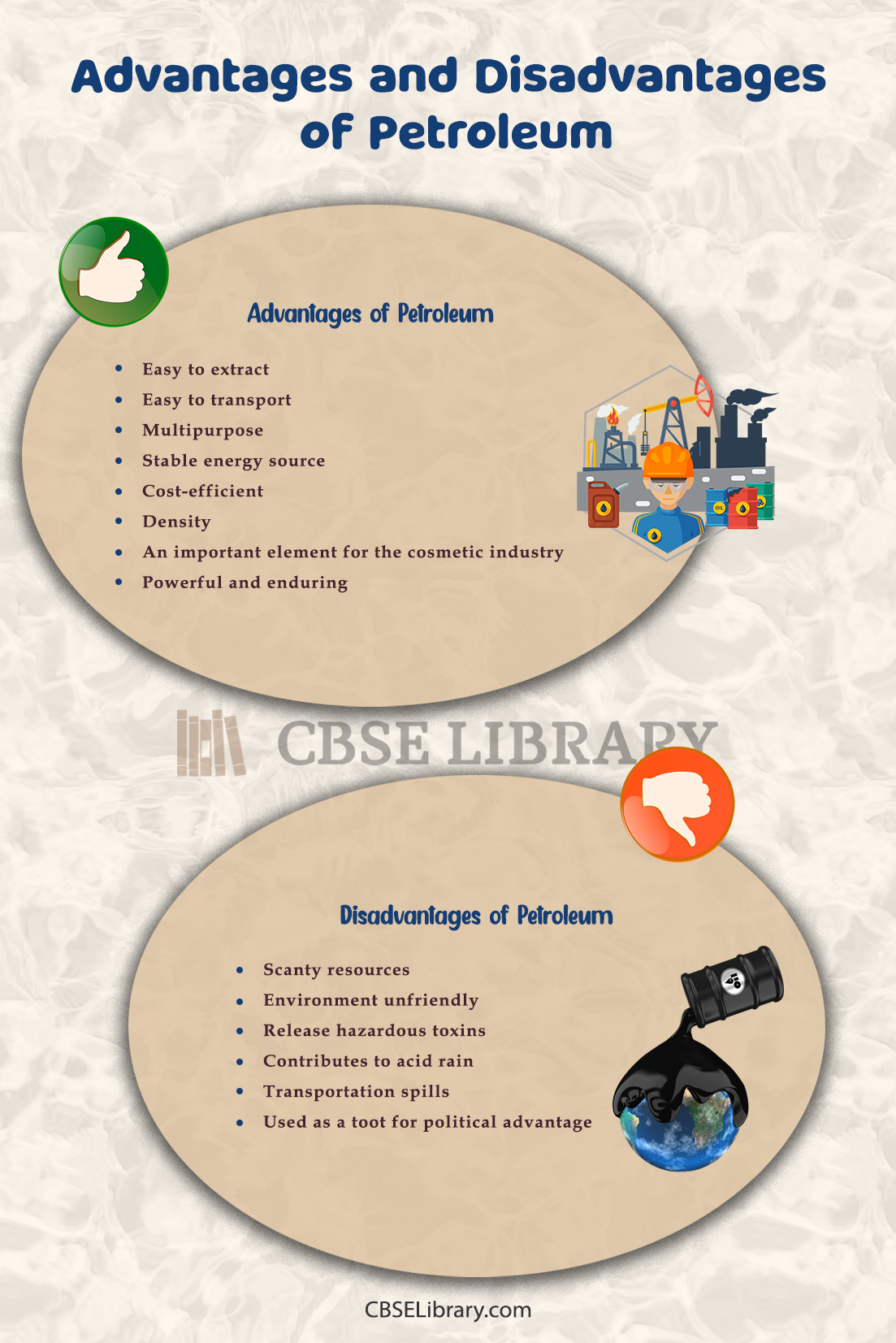 Comparison Table for Advantages and Disadvantages of Petroleum

FAQ’s on Advantages And Disadvantages Of Petroleum

Question 1.
Is petroleum used in the construction of roads?

Answer:
Yes, petroleum in one of its forms is used to construct roads. The product is called Asphalt, which is black colored liquid. It is obtained after the distillation of Petroleum. Asphalt is a composition of hydrogen and carbon.

Question 2.
Is plastic a type of by-product of petroleum?

Answer:
Yes, Bio-plastics or conventional plastics are made from petroleum. Also, this type of plastic is non-biodegradable.

Question 3.
What is the composition of petroleum?

Answer:
Petroleum is made of several compounds like carbon, hydrogen, nitrogen, sulfur, nitrogen, and hydrocarbons like asphalt, alkanes, and naphthalene.

Question 4.
Where can petroleum be found?

Answer:
Petroleum can be found under the land or the ocean bed. There is a very complex process of extracting and refining petroleum.