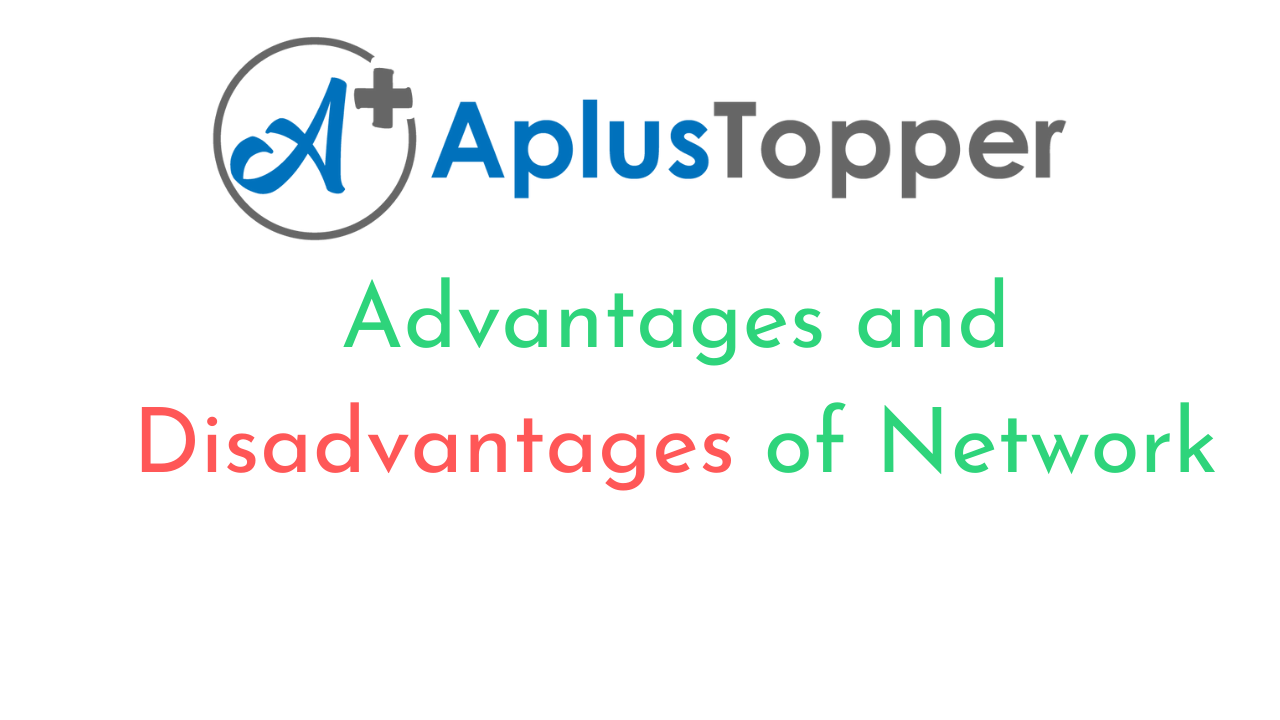 Advantages and Disadvantages of Network: Networking is difficult to master. It’s not enough to just go up to someone and introduce yourself. There’s so much more you need to know about networking, like what kind of networker are you, what are the different types of networks, how do you know when a networker is working with your best interests in mind? In this article, we break down the importance of networking and teach you how to do it for long-term success!

What Does A Good Network Do For You?

Networking gives you the ability to accelerate your career and expand your professional network in a way that is cost-effective and scalable. Networking can also help you find job opportunities or even new clients. There are many ways to network effectively and they can be categorised in three main types:

Professional networking is a great way to network with people in your industry. It gives you the opportunity to learn from others with similar experiences, build relationships, and develop your professional network. There are many advantages of networking, including improved job search skills, increased confidence in public speaking, and improved negotiation skills. Other advantages are as follows:

Strengthen business connections: Networking is an essential business skill. Identifying opportunities, creating stronger connections and learning valuable information can be critical steps to creating success. Learning to network and make connections not only helps you learn what you need to grow, but it also builds a sense of satisfaction and connection with others related to your profession.

Generate new ideas: Networking is an excellent opportunity for business owners to generate new ideas. By meeting new people, they have the perfect chance to be exposed to fresh information and interesting perspectives. When they are developing their own perspective, networking allows them the time to become more introspective.

Enhance visibility: Networking can help individuals to increase their visibility both professionally and personally. Professionally, making use of networking opportunities can impact how many doors are open for career advancement or finding customers or partners. Personally, it can be used to improve one’s social life through meeting others with similar interests at events that are held for those purposes.

Advancing career: Networking can help many different professionals, not just CEOs. It is a fantastic way to increase the likelihood that you will be offered a high paying position, get a significant pay rise, and be nominated for a promotion. Ironically though, if your resume is fantastic but you don’t know how to netork effectively, this holds you back from getting the career development opportunities that someone who doesn’t have an amazing resume would receive because their networking skills are great.

More job opportunities: Companies have a hard time finding qualified candidates for vacant positions. Most of the high-skilled workers are already employed, so there isn’t a large pool to choose from. Networking greatly increases your chances of being found by employers. If you know other people in the field where you want to work, you will have an easier time establishing connections to make yourself more desirable as a job candidate.

Gain more knowledge: Networking gives you the opportunity to get the inside scoop on the latest information in your particular industry. Learning about people’s individual accomplishments can make you more prepared for conversations with peers and superiors, which in turn makes you seem more knowledgeable. People that want to excel professionally understand that listening, sharing stories, and asking questions will help them get ahead.

Finding career advice: Networking has become a key strategy for success. It used to be that networking was something you did if you had to, but now it is an essential process for breaking into the right circles for promotion, getting advice, and accessing new opportunities. It makes sense because people who are climbing the ranks are the ones who have the inside scoop on what is new in their environment. This is why networking events have never been more popular. They are not just about connecting referrals any more – they are about information exchange on every level.

Helps to build confidence: Networking is a guaranteed way to build confidence. Meeting people for the first time can be intimidating, but remember that they are just normal people like you – so don’t think too hard about what to say and just have a casual conversation about something you have been eager to talk about. Doing so will open up opportunities for you to discuss.

Builds long-lasting relationships: Networking helps to build mutually beneficial relationships among different groups, professions, communities or professions. Networking is all about following-up with people on shared interests and needs which can range from finding new clients, networking with peers in an industry to helping each other find events where they can make connections with potential business partners. 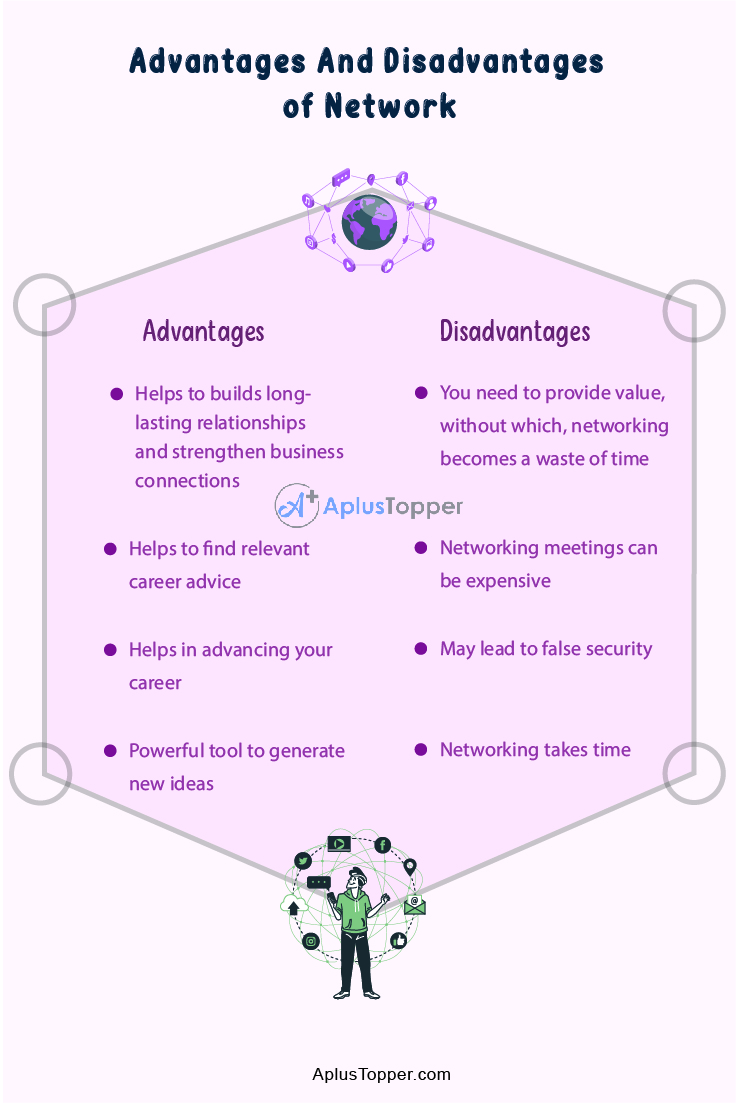 The cons of networking relate to how it can be a drain on time and resources. If you’re not careful, then your work life balance will suffer. In addition, some people may feel uncomfortable networking because it feels anti-social or forced. Other disadvantages of networking are as follows:

Networking takes time: There are several disadvantages of networking. One of these is the time it takes away from family, hobbies, and your personal life. Moreover, you can’t expect connections to happen without having some kind of commonality established with the individual first.

May be ineffective: Networking doesn’t always lead to a job position or a business opportunity. There are many factors that contribute to this problem, but they all generally come down to networking being a numbers game. Most people overestimate how often they will be able to use their contacts for collaboration opportunities.

May lead to false security: One of the disadvantages of networking is when people think that their network will help them in tough situations. They believe that just because they know someone in a higher position than them, it will be easy to obtain an opportunity for employment, promotion, or even to get a business loan.

Networking changes over time: Networking is a valuable tool to use with anyone you meet. This is especially important for business people who are constantly meeting with new people within their industry. However, networking changes over time and can become counterproductive depending on the circumstances. This is because the dynamics of networking has changed drastically over the past few decades, turning most of it into small talk or making connections with people you have no intention of doing business with.

Most people do not know how to network: Networking is a strategy that many people have trouble with. A lot of people don’t understand how networking works and get mixed up in all the hype. Networking is about building relationships with people, not just selling to them. It’s more about being helpful than being helpful. You should never focus too much on what you want from the person you are networking with. Moreover, when you network, you are not just connecting to one person- you are connecting to the group of people that they know too. That’s why it’s important to do research on the person you want to connect with before reaching out.

Networking meetings can be expensive: It costs money to attend networking events and conferences. These meetings, which can last for hours or days, don’t usually provide any tangible benefits either. The only thing that they might confer is access to a group of people who could potentially become clients. In other words, networking meetings might only be worth the time and expense if they offer the opportunity to make substantial deals with potential customers or gain new opportunities.

Long-term activity: Networking is not a quick fix to get what you want. It’s an investment. It takes time to build relationships with other people, so it will take time to see the results of your networking efforts. But this doesn’t have to be a bad thing because networking is a long-term game that requires patience and hard work. Hence, many might  give up just after a few days because they don’t see results right away.

You need to provide value: Networking is a lot like fishing. You have to know how to place your bait and make sure it’s worth catching. If you don’t bring value, people won’t listen to what you’re saying. You’ll need to know how to network in order for it to benefit you. You can’t just stand there and expect people to come talk with you. They won’t do it without a good reason.

Following is the table summarising the advantages and disadvantages of networking: 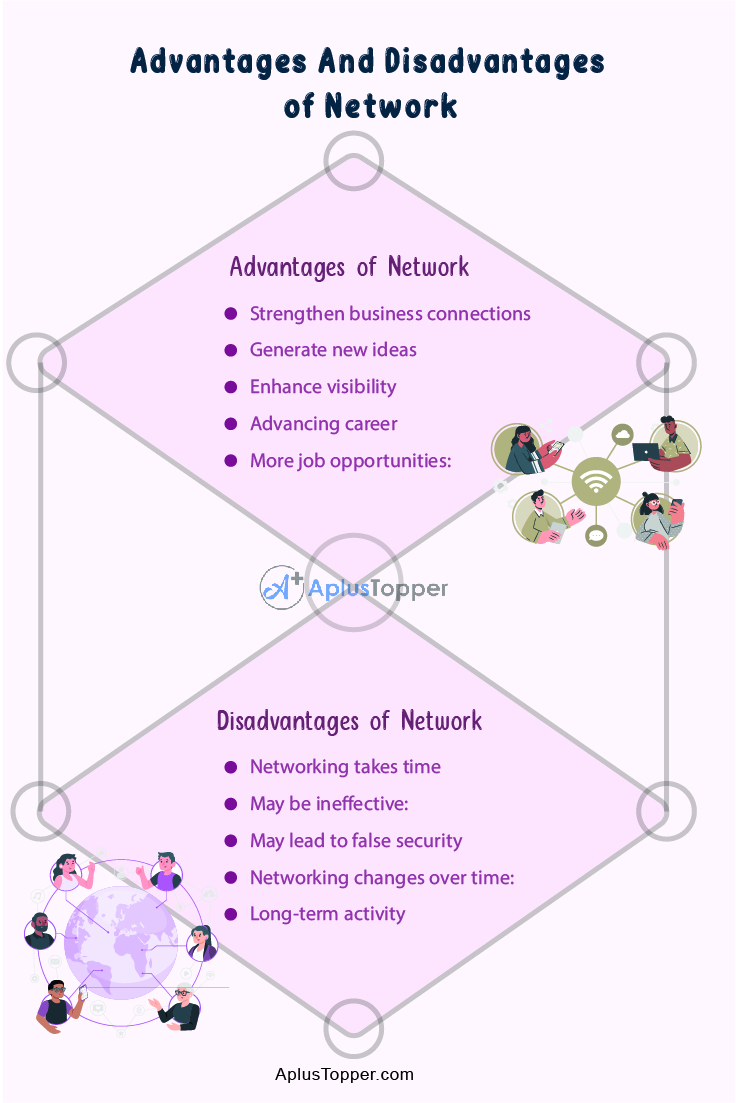 Conclusion on Advantages And Disadvantages of Network

Networking lets you connect with people in your industry, which provides you with opportunities for collaboration, mentorship, and support. It can also be a powerful tool in generating new business and growing your business. The best way to get started is by joining groups, online or otherwise. Once you have joined a group, you can make connections with other members and attend events. Networking also has the potential to help you develop your career and find mentors for advice and guidance in starting a business. However, it does take time and effort to maintain the relationships that networking generates. Networking may not be the right strategy for every business, but if you do decide to try it, be sure that it will bring measurable results to justify the effort.

FAQ’s on  Advantages And Disadvantages of Network

Question 1.
What is the meaning of networking in business?

Answer:
Networking is the practice of developing and maintaining mutually beneficial relationships through both professional and personal contacts. It’s a way to promote your company, products, or services through your connections with other people.

Question 2.
What are the advantages of networking in business?

Answer:
Networking has many advantages including building your business, finding jobs, and making new friends. You’ll always want to be professional when networking but it’s nice to be able to meet people that you wouldn’t normally come into contact with through your day-to-day life.

Question 3.
What are the disadvantages of networking in business?

Answer:
The major disadvantages of networking is that it can be exhausting, time-consuming, and often ineffective. To make networking beneficial, you should only network with people you know or who could be likely customers or clients.

Question 4.
What’s the importance of networking?

Answer:
Networking affects your business by giving you the opportunity to find customers, suppliers, and employees. You can also find mentors, instructors, or other entrepreneurs who make good connections. Networking also provides an environment where people talk about their businesses and learn new ways to improve them. It’s also a great way to meet important people who could help you with your goals within the company.