I. Answer the following questions in 40-50 words each :

Question 1.
Identify George Washington, telling the part played by him in the American Revolution.
Answer:
He was a great general who took an active part in the American War of Independence. He led the American forces in this war. By the quality of his leadership and sacrifice, he routed the British armies under Lord Cornwallis who was forced to give in before the colonists. It was a big victory of Americans and George Washington became the first elected President of the United States of America and performed his duties with unmatched dedication.

Question 2.
Why is the Boston Tea Party important ?
Answer:
Lord North became the Prime Minister of England in A.D. 1770. He tried to solve the problem of the colonies by abolishing all the duties except a nominal duty on tea for import facility. But in A.D. 1773, when a cargo of tea arrived the Boston port from India, some disguised colonists boarded the ship and threw 340 chests of tea into the sea. This incident is known as the ‘Boston Tea Party’. For this disobedience, the British Government passed the Boston Port Act and the Port of Boston was closed and the self­ government charter was also cancelled by the Massa-­chusetts Government Act.

Question 3.
How did the Philadelphia Congress influence the course of the American Revolution ?
Answer:
The representations of all colonies, except Georgia met at Philadelphia on September 5, 1774 for declaration of Rights and decided to oppose the taxation by the British  Government and sent a petition known as the ‘Oliva Branch Petition’, against the 13 Acts passed by the British Parliament since 1765. but it was refused, so the colonists declared a war against England in A.D. 1775. Hence, this was a remarkable opposition which greatly affected the American Revolution.

Question 4.
Who was Thomas Jafferson ? What part did he play in bringing the American Revolution ?
Answer:
Thomas Jafferson was great thinker and philosopher of America. He was also inspired by the British philosophers in the field of human life and rights. He explained the people the importance of independence and prepared the people to revolt against the British Government. He became successful to draft the famous declaration of independence in A.D. 1776.

Question 5.
Identify Thomas Paine, telling the part played by him in the American Revolution.
Answer:
Thomas Paine was a great thinker, orator, writer and philosopher. He was a British emigrant who had made America his home. As a successful writer he impressed the public of. England and America and explained the dignity of liberty. His speech and writings both affected the success of the American Revolution. His famous pamphlets ‘Right of Man’ and ‘Common Sense are particularly famous.

II. Answer the following questions up to 80-100 words each:

Question 1.
How did the economic exploitation of the colonies lead to the American Revolution ?
Answer:
The British Government exploited the American colonies by taxing every item which is important for livelihood. The thirteen colonies served as a market for the English goods and provided raw material for their factories. The colonists protested against the increasing taxes; so the taxes remained on certain articles like paper, glass, tea and paint. But afterwards, due to continuous opposition all taxes were withdrawn except on tea. Ultimately, the colonists became aware of their strength and determined to commence the American Revolution.

Question 2.
What was the Stamp Act ? Why was it resisted by the Americans ?
Answer:
England had spent a lot of money on the defense of her colonies in America during the Seven Year’s War. Besides this, money was also needed for army protection. So, again the financial burden was to be shared by the colonies. George III and his ministers followed an unwise policy e.g. imposing Navigation Act and Custom Laws and also the Stamp Act in 1765. This Act was strongly opposed by the colonists, because, it was the climax of the burden of exploitation. All these policies realised them to be bankrupt and leading a troublesome life.

Question 3.
Explain the importance of the ‘Declaration of Independence’ in the American Revolution.
Answer:
The representatives of the 13 American colonies met for the second time at Philadelphia in A.D. 1776, even during the war. On 4, July A.D. 1776, the Second Continental Congress, adopted the Declaration of Independence. This event has a great importance of its own both in the History of America and the History of the world. This declaration proved a sort of ‘Magna Carta’ in the History of the World and created an era of nationalism and democracy throughout the world. This gave a big boost to the accomplishment of the American Revolution.

Question 4.
What is the significance of American Revolution in the world ? Elucidate any four facts of its significance.
Answer:
After the war of Independence for 8 years (A.D. 1775­-1783), England was defeated and according to the Treaty of Versailles with the colonists, the war came to an end in 1783.Hence, the birth of United States of America came to the existence, which became one of the richest nation in  the world. Written constitution came into form as an example for the world politics. The powerful, the First Federal Republic in the world was created, which represented an ideal example for many countries in the world e.g. India. Another advantages are the establishment of democracy and encouragement to Nationalist. This revolution was also the imprint of the English Revolution of the 17th century. This became a big example of right direction of truthful revolution against an oppressive government.

IV. Match the statements in Column ‘A’ and Column ‘B’ 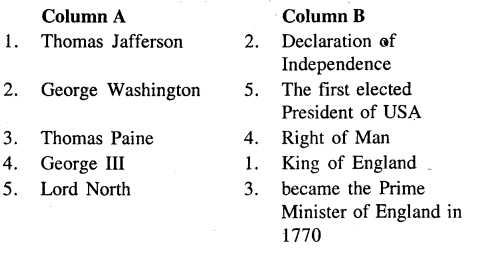 
B. Match the following

Question 3.
Give an account of the Boston Tea Party incident. What is the importance of this event?
Answer:
In 1773, a group of colonists, disguised as Red Indians, raided British ships in Boston harbour and threw 340 crates of tea into the sea. This incident was a protest against the new taxes including a tax on tea, imposed on the colonies .The importance of this act was that it was an act of open defiance of the colonists against British authority.

Question 4.
Mention the important principles contained in the Declaration of Independence, 1776.
Answer:
The Declaration of Independence, 1776 clearly stated that the American colonists had the right to free themselves from the oppressive and explorative British government and form their own government. This declaration proclaimed that all men are bom equal and are endowed with certain rights such as the right to life and liberty and the pursuit of happiness.

Question 7.
In what way did the American Revolution influence the Indian Constitution?
Answer:
The constitution of the United States of America has served as a model and an inspiration to several countries including India. The framers of the Indian constitution adopted various features like the federal form of government, the incorporation of Fundamental Rights like the American Bill of Rights and the system of checks and balances.

Question 8.
Why is the French Revolution of 1789 considered a turning point in human history?
Answer:
The French Revolution of 1789 was a milestone and a major turning point in human history. It revolutionized the social, economic and political fabric, not only of France but of all Europe and subsequently of almost the entire world.

Question 9.
Into how many classes was French society divided? What did each class consist of?
Answer:
The French society was divided into three main classes, called Estates.

Question 10.
Briefly discuss the inequalities and injustices in French society.
Answer:
The First and Second Estates enjoyed numerous privileges.
They owned practically all the land in France but did not have to pay and taxes. They were very wealthy and led comfortable and luxurious lives.
The Third Estate, on the other hand, shouldered the entire burden of taxation but was not entitled to any of the privileges  enjoyed’by the clergy and the nobles. Taxes were imposed on everything including basic necessities like salt. Life was very hard, especially for the poor peasants.

Question 11.
Mention the role of the following in the overthrow of the French monarchy:
(1) Middle class
(2) Political philosophers
Answer:

Question 12.
Examine the drawbacks of the French monarch and the French administration which angered the French intellectuals and eventually led to the Revolution of 1789.
Answer:
The administration was corrupt and inefficient. The officials were selfish and unconcerned about the welfare of the people. King Louis XIV was pleasure-loving and extravagant. He was completely ignorant of and indifferent to the sufferings of the common people.The economic bankruptcy was further aggravated by French involvement in useless wars against England. These all circumstances led to Revolution of 1789.

Question 14.
Why is 14 July celebrated as a national holiday in France?
Answer:
In 14 July 1789 a great mob attacked Bastille, the state prison for political prisoners were released and they joined the  revolutionaries. So this incident was symbolized the victory of  the people of France and the fall of monarchy. So 14 July is celebrated as a national holiday in Frances,

Hope given A New Combined History & Civics for Class 8 ICSE Solutions  Decline of the Mughal Empire are helpful to complete your  homework.