I. Answer the following questions in 40-50 words each :

Question 2.
Why did Sir Syed Ahmed Khan oppose the Congress ?
Answer:
Sir Syed Ahmed Khan was a great scholar and reformer of society. Being a muslim, he was against the Hindu dominated congress, as he wanted the equal share of Muslim members. So, he also organised Anglo-Muslim Associations to oppose the congress and support the British Government. However, he prepared the Muslims to meet the challenge and to be educated and wise.

Question 3.
Describe any three steps taken by the Brahmo Samaj in reforming the Hindu society.
Answer:
It was founded by Raja Ram Mohan Roy in A.D. 1828. He was the first to attempt to reform the Hindu Society. e.g.

Question 5.
Name the movements associated with the names of Jyotiba Phule and Shri Narayana Guru.
Answer:
Jyotiba Phule was the founder of Satya Shodhak Samaj in 1848 in Maharashtra for the upliftment of the oppressed classes. He opened many schools. He condemned the caste structure. He was also given the name of ‘Mahatma’. Shri Narayana Guru fought for the uplift of oppressed people, especially for the Ezhavas, his own caste. He was a great scholar of Sanskrit. He founded the Shri Narayana Dharma Paripalana Yogam and advocated the principle of “One God and One Religion”.

II. Answer the following questions in not more in 80-100 words each :

Question 1.
Estimate the reform work done by Raja Ram Mohan Roy in the social and religious fields in the 19th century.
Answer:
Raja Ram Mohan Roy was a great social and religious reformer. He established Brahmo Samaj in A.D. 1828. He preached on equality of mankind and insisted on to worship one God without useless rituals. He condemned the caste system and untouchability. He followed the principles and ideals of Vedas and Upanishad and translated the Vegas into Bengali. He made his best efforts to stop Sati system and polygamy. He favoured widow-marriage. He favoured the teaching of English language for increasing knowledge. He laid the foundation of an English School, the Hindu College and the Vedanta College.

Question 2.
Who was Swami Ramkrishna Paramhansa ? What were the basic principles of his teachings ?
Answer:
Ram Krishna Paramhansa was a great saint of Bengal. He was scholar of ancient Sanskrit literature. He believed in salvation through meditation and devotion. Swami Vivekanand (1863-1902), the great disciple of Swami, greatly helped to communicate the teachings of his Guru, who discarded caste-system, rituals and superstitions. The basic thoughts of his teachings were to cultivate the spirit of liberty, equality and free-thinking. He also represented India and the principles of his Guru in Chicago in A.D. 1893 and glorified the Hindu religion. He also founded Ram Krishna Mission in A.D. 1896. Today, various branches of this mission are established all over the world.

Question 3.
Write a brief note on the work and teachings of Swami Dayanand and the Arya Samaj.
Answer:
Swami Dayanand was a great reformer from a rich Brahmin family of Kathiawar state, Gujrat. He was also an excellent Sanskrit scholar and fond of Vedas. He founded the Arya Samaj in A.D. 1875, to revive Hinduism and reorganize the Hindu Society. He also believed in one God. His immortal work “The Satyarth Prakash”, is still guiding the people with his teachings; Arya Samaj opened many D.A.V. Schools and Colleges. Besides this Gurukul Kangri at Haridwar tried to revive the Gurukul system of education of ancient India.

Question 4.
Describe the contribution of Vivekanand to the awakening of the Indian people.
Answer:
Swami Vivekanand was a great personality who involved himself with deep passion to reform the Indian people by awakening their knowledge and attention towards the welfare of the society. Through Ramkrishna Mission, he strongly tried to condemn caste system, ritual ceremonies, superstitions in the religious aspects. The principles of humanism as the spirit of equality, liberty and free-thinking. Under his guidance, Ramkrishna Mission opened educational institutions, orphanages, hospitals, and libraries. He explained the importance of social welfare rather than personal salvation and essential oneness of all religions as gateways to proper life style for ideal living.

Question 5.
What steps were taken to elevate the status of women In society ?
Answer:
Sati system was prohibited by the British Government in A.D. 1829. Various laws were passed against killing the young daughters in A.D. 1795, 1802 and 1804. Women education was promoted by opening many schools for . them. Child marriage was banned but remarriage of widows was supported in A.D. 1856. Women also were given the right to inherit the property.

Question 1.
What were the five evils that invested the Hindu Society in the 18th century ?
Answer:
Five evils were Sati system, Child marriage, killing of young girls, torture of widows, illiteracy particularly of girls, etc.

Question 3.
Whose names are associated with the following Abolition of Sati System; Gramodyog Sangh; Back to the Vedas; Hindu High School, Benaras; Anglo-Oriental College, Aligarh.
Answer:

IV. Match the statements in Column ‘A’ and Column ‘B’ 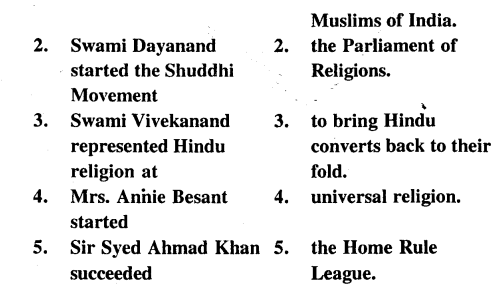 B. Match the following

Question 3.
What were Ram Mohan Roy’s views on modern education?
Answer:
Raja-Mohan Roy was a great champion of Modem western education. He believed it would serve as an instrument for the spread of progressive ideas and accelerate the pace of social
change. He believed that the salvation of India lay in adopting western principles of reason and humanism and acquiring the knowledge of Modem science.

Question 11.
Who was Sir Syed Ahmed Khan? Mention the social reforms advocated by him.
Answer:
Sir Syed Ahmed Khan played a significant role in awakening the Muslims to the need to change with the times. He believed that only through western education and knowledge of English, the Muslim community could progress and scientific temper be developed. His greatest achievement was the foundation of Mohammedan Anglo-Oriental College at Aligarh in 1875. This College later on grew into the Aligarh Muslim University. To introduce social reforms he focused on the backward condition of the women. He advocated the removal of education for women and opposed polygamy.

Question 12.
Briefly mention the reform movement in South India.
Answer:
Veeresalingam, a prominent social reformer in south India, was deeply disturbed by the deplorable condition of Women in general and widow remarriage and education for women in particular. Sri Narayan Guru carried on a lifelong struggle against the caste system. His crusade was based on the principle of one caste, one religion, one god for mankind.

Hope given A New Combined History & Civics for Class 8 ICSE Solutions Social and Religious Reform Movements are helpful to complete your  homework.