I. Answer the following questions in 30-40 words each :

Question 1.
What was the position of Arabia before the rise of Islam ?
Answer:
Before the rise of Islam, the Arabs had divided themselves into many tribes. Each tribe was controlled by the tribal chief. There was no central government in Arabia and the tribes often fought with one another. There was no peace and order in Arabia. The black rectangular stone set in a holy building called the ‘Kaaba was revered by the Arabs. Infact at that time, Arabia was a land of superstition and ignorance.

Question 2.
Throw some light on the life of Muhammad.
Answer:
Prophet Muhammad, the founder of Islam was born in Mecca in Arabia in A.D. 570. He lost his father before his birth and mother when he was a small child. He was brought up by his uncle. He worked for a widow whom he later married. He was a spiritual type of man and spent a lot of time in meditation. One day ‘light’ dawned on him and God asked him to spread the true faith among the people. He openly condemned idol worship and preached against all sorts of superstitions. He made many enemies and so he took refuge in Medina in A.D. 622 and this is known as Hijira, or the year of migration. In A.D. 632 he fell ill and soon died on 8th June A.D. 632. But before his death, he had converted the whole of Arabia to the new faith, i.e., Islam.

Question 2.
How did Islam spread to Middle East ?
Answer:
Nearly all Arabia had accepted Islam and became a unified state before the death of Prophet Muhammad in A.D. 632. From Arabia, Islam spread very fast to Iran, Syria, Egypt, Central Asia, which the Arabs conquered. Wherever Arabs went their religion went with them.
The first three Khalifas ruled from the city of Medina. From A.D. 661 to A.D. 750 the Ommayids ruled and the Islam religion penetrated to Balkh, Herat, Kabul and Ghazni in Central Asia, Under the Abbasid Khalifas Oxus and Jexartas was added to the Khalifat Empire. Under the Omayyid Khalifas Damascus was the capital whereas under Abbasid Khalifas Baghdad became the capital. Infact the Arabs were the inhabitants of a poor country, so they wanted richer lands. The neighbouring countries were tired of oppressive rule and attracted by the simplicity of teachings of Islam, welcomed the invaders. Thus Islam spread in the Middle East countries.

Question 4.
What was the contribution of Islamic civilisation in the field of culture ?
Answer:
The Islamic civilisation made an important contribution in the field of culture. The Arabic language was developed into a language of literature. Baghdad, Barcelona, Cairo became the famous universities and great centers of learning. There were well stocked libraries for the scholars to promote research work.
The Arabian Nights contains many famous stories of all times. A Biographical Dictionary contains accounts of 865 Muslim personalities. ‘The Annals of the Apostles and Kings’ written by  Al-Tabari, ‘Rubaiyat’ by Omar Khayyam, Gulistari and Bostan by Sheikh Saadi were great literary works of Islamic culture.

Question 5.
What was the impact of the rise of Islam on trade ?
Answer:
The Arabs were commercial people who left a great impact on trade. While spreading Islam different parts of the Muslim world developed close trade relations. The Arabs established trading posts along the west coast of India and carried goods to China and Japan. The Arabs took control of rich trade of India and that of the eastern Mediterranean in their hands until the 12th century. The merchants of Europe and Asia visited the great centers of Baghdad, Bukhara and Samarkand.

IV. Match the contents of Column A with those of Column B 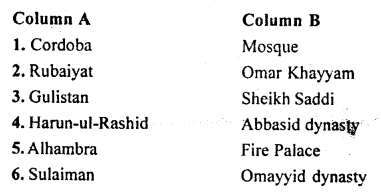 A. Additional Questions
Question 1.
Who were the Caliphs and what was their contribution to Islam ?
Answer:
The Caliphs were both the religious and political leaders. The Caliphs who were the successors of Muhammad, were regarded as the Vicars of God on earth. The central authority of the government was vested in the Caliphs. They were next to ‘Allah’ and no one dared to challenge their authority. To protect and promote Islam and to work for the welfare of the people were the main duties of Caliphs.
Though the Caliphs were despots yet they were benevolent. They patronised scholars and scientist. They paid attention towards providing a well ordered system of government and good scheme of taxation. They also restored the old Roman roads and got new ones constructed. They encouraged trade and industry and also maintained law and order. Under the rule of the Caliphs, the people were happy and prosperous

Question 2.
What was the contribution of Arabs in the field of science ?
Answer:
In the realm of science, the Arabs made many original contributions. Whereas Mathematics is concerned, they introduced Arabic numerals. They made Algebra an exact science. They also developed analytical geometry and spherical trigonometry. In the field of medicine, they treated insanity in a scientific way. Avicenna, the author of Medical Encylopedia, was a great Arab physician. In Physics, they developed the principle of pendulum and in Chemistry they discovered Alcohol, Potash, Nitric Acid, Sulphuric Acid and Nitrate of Silver.

Question 3.
What are the features of Arab Architecture ? Give examples of some mosques and palaces ?
Answer:
Round arch, graceful minarets, domes, pillars and rich ornamentation are the well known features of Arab architecture. Beautiful mosques like those of Cordoba and Seville and fine palaces like the Alhambra Palace in Spain are the best specimens of Muslim architecture.

B. Match the following

C. Answer the following questions,
Question 1.
What important event took place in Muhammad’s life around 610 CE?
Answer:
When Muhammad was about forty years old, he had a vision of God, who revealed to him the divine message, to carry the word of God or Allah to the people of Mecca. He declared that All^h was the one and only God and Muhammad was his Prophet. This gave way to a new religion called Islam.

Question 3.
What is the importance of the year 622 CE in the history of Islam ?
Answer:
In the year AD 622 Muhammad and his small band of followers were forced to flee to Medina, due to their teachings which angered the rich Arabs. There in Medina people welcomed them and within ten years Muhammad won considerable support. His supporters included a small but devoted army which was ready to lay down their lives for the sake of Islam.

Question 4.
Why was the House of Wisdom set up in Baghdad ?
Answer:
The house of wisdom was set up in Baghdad as it was advised by Prophet Muhammad to pursue learning among Arabs. So Baghdad become the place of wisdom where various ancient civilizations such as Greek, Byzantine, Egyptian, Chinese, Indian and Persian were translated into Arabic.

Question 5.
How did the Arabs enrich their knowledge ?
Answer:
Arabs enriched their knowledge a great deal from the ancient Indian civilization. Knowledge of Indian mathematics, medicine, astronomy, philosophy and the art of administration was assimilated by the Arabs, leading to enrichment of the Arab civilization and culture.

Question 7.
Why were the Indians not receptive to Arab learning and civilization during this period ?
Answer:
The spirit of exclusiveness among the Hindus made them  reject foreign cultural influence. The Hindus believed that no other – country on earth but theirs had any knowledge of science. Hence, they were not receptive to the rich treasures of Arabic learning and civilization.


Hope given A New Combined History & Civics for Class 7 ICSE Solutions Chapter 2 are helpful to complete your  homework.