Question 2.
A bullet of mass 30 g, and moving with a velocity x hits a wooden target with a force of 187.5 N. If the bullet penetrates 80 cm, find the value of x
Answer:

Question 1.
(a) Define force.
(b) State four effects which a force can bring about. Give two examples in each case.
Answer:
(a) Force : It is defined as an external cause which changes or tends to change the state of rest or uniform motion of a body in a straight line.
(b) Effects of force : A force can bring about the following effects.

1. Force can set a stationary body into motion.
For example :

2.  Force can stop the moving bodies.
For example :

3. Force can change the speed or direction of a moving body.
For example :

4. Force can change the dimensions of a body.
For example :

Question 2.
What do you understand by the following terms?
(a) Contact forces (b) Non-contact forces
Answer:
(a) The forces which act on bodies when they are in actual contact, are called the contact forces. Two examples are as below:

Question 3.
(a) What do you understand by the term inertia?
(b) What are its kinds?
(c) Give two examples of each kind, stated in (b).
Answer:
(a) Inertia. “Is the property of a body due to which it cannot change its state (rest or of uniform motion) itself.” Untill some external force is applied on it.
(b) The three kinds of inertia are:

(1) Inertia of rest: The tendency of a body to continue in its state of rest, even when some external unbalanced force is applied on it, is called inertia of rest.

(2) Inertia of motion: The tendency of a body to continue in its state of motion, in a straight line, even when some external unbalanced force acts on it, is called inertia of motion.

(c) Examples of inertia of rest:


Examples of inertia of motion:

Examples of inertia of direction:

Question 8.
Prove mathematically F =ma
Answer:
Derivation of F = ma from Newton’s Second Law of Motion:
Newton introduced the concept of momentum and say “The momentum of a moving body is defined as the product of its mass and velocity.”
Thus, p = mv, where p = momentum of body
m = mass of body
v = velocity of body
Suppose the velocity of body of mass m changes from u to v in time t.
Initial momentum, p1 = mu
and final momentum, p2 = mv
the change in momentum, (p2-p1) takes place in time t. Then according to Newton’s second law of motion, the magnitude of force F is:

This relation holds good when mass of the body remains constant.

Question 9.
Define absolute units of force in CGS as well as SI system.
Answer:
Absolute unit of force in CGS system is dyne and in SI system is Newton (N).
One dyne : When the body of mass 1 gram moves with an acceleration of 1 cms-2, then the force acting on the body is called one dyne.
1 dyne = 1 g cms-2
One Newton : When a body of mass 1 kg moves with an acceleration of 1 ms-2, then force acting on the body is said to be one newton.

Question 11.
State Newton’s third law of motion and give two examples.
Answer:
Newton’s third law of motion states “to every action there is an equal and opposite reaction.” It is useful for rocket propulsion.
Examples :
(1) Consider a book lying on the table. Its weight (w) acts vertically downward (Action on the table) and book does not fall. That means table is exerting equal force on the book, but in opposite direction [normal reaction R] called reaction. Thus, action and reaction are equal and opposite. 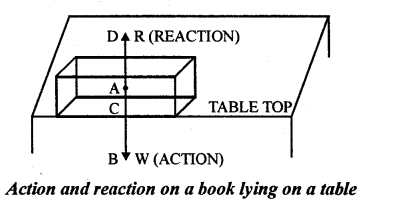 (2) When we swim in water, we push the water backward [Action] and water in turn exerts equal force on us but in opposite direction (Reaction) i.e. there are two different objects man and water and two forces equal in magnitude and opposite in direction. 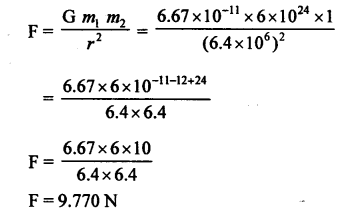 Question 4.
The impulse of a body is equal to :
(a) rate of change of its momentum
(b) change in its momentum
(c) the product of force applied on it and the time of application of force.
(d) both (b) and (c).

Question 7.
Which of the following are vector quantities?
(a) Momentum
(b) Velocity
(c) Force
(d) All of these
Answer:
(d) Explanation : All those quantities which have magnitude as well as direction are known as vector quantities.

Question 8.
A woman drawing water from a village well, falls backward, when the rope snaps. This is on account of
(a) Newton’s third law of motion
(b) Newton’s law of gravitation
(c) Newton’s second law of motion
(d) Newton’s first law of motion
Answer:
(a) Explanation : To every action, there is an equal and opposite reaction.

Question 9.
When you kick a stone, you get hurt. Due to which property this happens?
(a) Inertia of stone
(b) Velocity of the kick
(c) Momentum of the kick
(d) Reaction of the stone.
Answer:
(a) Explanation : The property of a body by which it is unable to change its state of rest or of uniform motion by itself, even when some external force is applied on it, is called inertia. 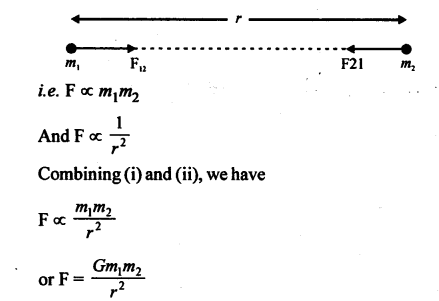 Where G is the constant of proportionality and is known as the universal gravitational constant. Its value at all places in this universe is 6.67 × 10-11 Nm2 kg-2.

From this equation, it is clear that
(1) g ∝ M
Acceleration due to gravity on the earth is directly proportional to the mass of that earth.

Acceleration due to gravity is inversely proportional to square of the distance of the body from centre of the earth.

Question 3.
(a) What do you understand by the term mass?
(b) State two important characteristics of mass.
(c) State units of mass in CGS and SI systems.
(d )Name the device used for measuring mass.
Answer:
(a) Mass: The quantity of matter contained in a body is known as its mass.
(b) Characteristics of mass :

Question 10.
How is weight affected in the following cases, when initially the body is weighed in Delhi with a spring balance?

Question 11.
Describe, briefly how can you calculate the value of ‘g’ with a simple pendulum.
Answer:
Simple pendulum : A simple pendulum consists of a small heavy mass in the form a bob suspended by a light inelastic string.
The pendulum is suspended from a suitable support (the thread may be held firmly between two halves of a cork held by a clamp and stand). The pendulum is allowed to oscillate and its time period for one oscillation is noted with the help of a stop­watch by observing a large number of oscillations. The length of the pendulum is changed several times and the time period is determined in each case. A graph is plotted between l, the length of the pendulum, and T2, the square of time period. 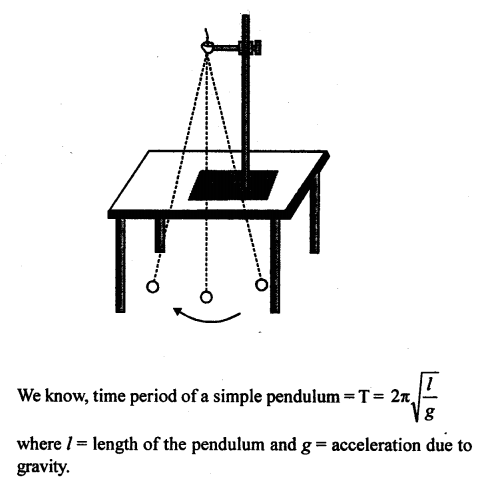 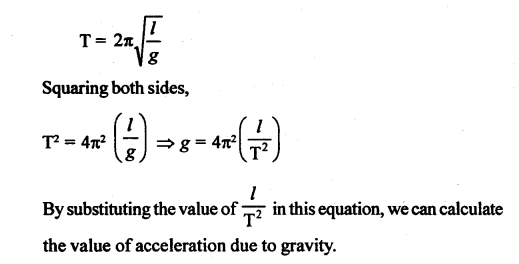 Hope given  A New Approach to ICSE Physics Part 1 Class 9 Solutions Law of Motion are helpful to complete your science homework.

If you have any doubts, please comment below. APlusTopper try to provide online science tutoring for you.