Question 5.
Explain why is it no wise to regard wood as a renewable sources of energy.
Answer:
Use of wood is renewable source, but is not advised to use, because saplings take a long time to become a tree.

Question 9.
State three ways by which you can enhance the collection of solar energy.
Answer:
Following are the three ways by which we can enhance the collection of solar energy :
(i) Use of black painted surface : Black surfaces are good absorbers as well as good radiators of radiant heat. Thus the surfaces of the objects which are to collect radiant heat are painted black, so that their temperature rises rapidly. But after some time, an equilibrium state is reached when the solar energy absorbed by a blackened object is equal to radiant heat radiating out from its surface. To overcome this difficulty, some means should be provided to that the rate of radiant heat from its surface is reduced or stopped altogether.
(ii) Use of insulated box with glass cover : The objects painted black, should be placed in well insulated box provided with glass cover. The insulated box will prevent heat losses due to conduction, convection and radiation. The glass cover will allow the solar energy to pass through it as it is transparent to radiant heat of smaller wavelength. However, when the object with blackened surface gets hot within the box and radiates out radiant heat, the glass will not allow these radiations to pass through, as they are of longer wavelength. Thus, the heat radiations are trapped within the insulated box, thereby raising the temeperature of objects with blackened surface.
(iii) Use of reflectors : As mentioned earlier, the amount of solar energy per square metre per second is too small to do any useful work. Thus, if solar energy is directly allowed to enter a solar heating device, it does not raise its temperature sufficiently. However, if solar energy is collected from a sufficiently large area and then reflected into the small area of a solar heating device, its temperature rises sufficiently to do some useful work. It is here that reflectors are useful for solar heating devices. 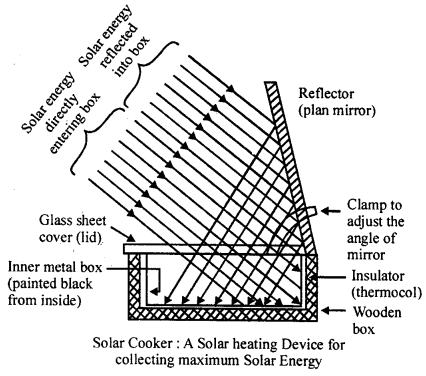 Question 11.
What is the range of temperature which can be achieved in it?
Answer:
The temperature within solar cooker rises to about 140°C.

Question 14.
What is a solar panel? To what uses are the solar panels put?
Answer:
Solar Panel : The group of solar cells connected in specific pattern to produce desired potential difference and magnitude of current is called Solar Panel.

Question 15.
What is biogas? Which component of biogas is used as fuel? Describe a fixed dome type biogas plant with the help of a labelled diagram.
Answer:
Biogas : Biogas is a mixture of gases formed when slurry of animal dung and water is allowed to ferment in the absence of oxygen (or air). Biogas is a mixture of methane, carbon dioxide, hydrogen and traces of hydrogen sulphide along with water vapours.
Its chief component methane is used as fuel.
Fixed dome type biogas plant :
It consists of follows parts :
Digester tank : It is an underground tank. Its base and walls are made of bricks and cement. Its roof is made in the form of dome either with cement or bricks or with concrete. The dome collects the biogas. It is provided with an outlet for biogas. The outflow of the gas is controlled by gas valve.
Slurry mixing tank : On the left hand side of the digester is constructed a brick lined tank above the ground level. The bottom of this tank connects the digester through a brick-lined channel near the base.
The fresh slurry of animal dung and water in equal proportions is poured into the slurry mixing tank. This slurry slowly flows into the digester. Spent slurry tank : On the right hand side of the digester is constructed spent slurry tank, below the ground level. The base of this tank is in line with the lowest point of the dome of the digester. The base of this tank is connected to the base of the digester through a brick-lined channel.
Working of fixed dome type biogas plant : Everyday the slurry of animal dung and water in equal proportions is poured into the mixing tank. This slurry flows into the digester. In the digester anaerobic fermentation starts with the release of biogas. The biogas formed collects in the dome.
As more and more slurry flows into the digester everyday, the level of slurry rises up. It takes about 30 to 60 days for the slurry to fill the digester depending upon the temperature within the digester. During this time the biogas collects in the dome under pressure.
When the pressure of biogas exceeds certain limit, the biogas forces the spent slurry into overlfow tank. The biogas is withdrawn from the dome through outlet pipe. Its flow is regulated by a gas valve. The spent slurry is periodically removed and is allowed to dry. It is then used as manure.
Once the biogas plant gets operative, it is a continuous process. Everyday fresh slurry is added in the mixing tank and spent slurry is removed from the overflow tank.

(a) Name the kind of energy possessed by the wind.
(b) State two advantages and two limitations of wind as a source of energy.

Answer:
(a) Kinetic energy is possessed by wind.
(b) Advantages of wind energy :

Question 19.
With the help of a diagram explain how wind energy is converted into electric energy.
Answer:
Windmill : It is a machine which converts kinetic energy of wind into electrical energy.
A windmill consists of two or three blades like an electric fan which rotates about an axle mounted on a pole.
The shaft of the windmill is connected to the shaft of armature of a generator. When the fast moving wind rotates the blades of windmill, its shaft rotates the armature inside the generator. The rotating armature produces electric current. Thus, the kinetic energy of wind is converted into electric energy. 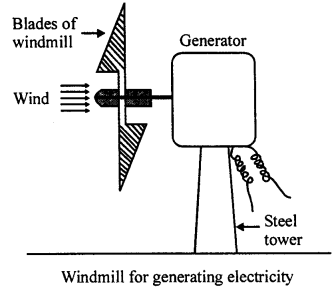 Question 25.
By which name heat energy in the interior of earth is known?
Answer:
Geothermal energy.

Question 27.
Name the nuclear process that is responsible for 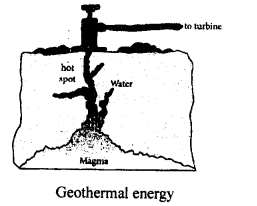 (ii) In some place, the steam formed under the surface of the earth does not get trapped. Instead it forces its way up through the cracks in the rocks along with hot water and rushes out from the surface of the earth to form natural geysers. The heat energy brought up by the natural geysers is used to generate electricity as stated above.
(iii) In some geological regions of the earth, there may be hot spots, but the underground water does not come in contact with them. In such regions, two holes are made in the Earth’s crust. Through one hole is pumped in cold water. The cold water on coming in contact with hot spot changes to super heated steam, which emerges out from the other hole. The steam is then made to run a turbine coupled with generator to produce electricity.

Question 32.
What are hot spots? How can you extract energy from a hot spot, if it does not come in contact with underground water?
Answer:
Hot spots : The places under the surface of earth, where hot magma collects at fairly less depths, are called hot spots of the earth.
If hot spot does not come in contact with underground water then two holes are made in the earth’s crust. Through one hole is pumped in cold water. The cold water on coming in contact with the hot spot changes to super heated steam, which emerges out from the other hole. The steam is then made to run a turbine coupled with generator to produce electricity.

Question 36.
Energy from various sources is considered to have been derived from the Sun. Do you agree? Justify your answer by giving two examples.
Answer:
Yes, sun is the ultimate source of energy directly or indirectly, all the forms of energy derived from solar energy.
(i) Non-renewable sources of energy : Fossil fuels like coal, petroleum and natural gas are formed due to burial of large plants and ancient creatures whose ultimate source of energy is sun.
(ii) Renewable sources of energy : They are indirectly derived from solar energy such as :

(a) Energy from flowing water : In lakes, rivers, seas etc., evaporates due to solar energy. They bring rainfall and snow fall.
(b) Wind energy : Wind energy arises due to uneven heating of the earth’s surface by the sun rays at two different adjoining places. Due to this, wind possesses kinetic energy.
(c) Bio energy : Plants in the process of photosynthesis convert the solar energy into food (chemical energy). This food is consumed by animals.
(d) Wave energy : The waves are generated by strong winds (due to solar energy) blowing across the sea.
(e) Ocean thermal energy : Sun is responsible for the temperature difference between the water at the surface and water at depth in seas and oceans.

(iii) Solar devices : They derive their energy directly from solar energy and convert it into other usable forms of energy.

Hope given A New Approach to ICSE Physics Part 1 Class 9 Solutions Energy Flow and Practices for Conservation of Resources are helpful to complete your science homework.

If you have any doubts, please comment below. APlusTopper try to provide online science tutoring for you.